BACK TO ALL NEWS
Currently reading: Car tax: what you need to know about Vehicle Excise Duty
UP NEXT
New 2022 Porsche Cayenne to bring design overhaul

Car tax: what you need to know about Vehicle Excise Duty

We help you figure out how much Vehicle Excise Duty you'll be paying on your new car, whether it's petrol, diesel, hybrid or electric
Share
Close
Share story

How much do you have to pay to tax your car? From today, 6 April, the amount could change because the government has overhauled the Vehicle Excise Duty system to encourage buyers to choose zero- and low-emission vehicles.

How much you'll pay depends on what kind of car you have, how old it is, and how you want to pay. This article should help you make sense of it all.

Vehicle Excise Duty, known as VED, is a tax levied by the government on every vehicle on UK public roads and is collected by the Driver and Vehicle Licensing Agency (DVLA). It’s a major source of revenue for the government, totalling billions of pounds each year, which goes into the central coffers of the exchequer.

Although VED is often referred to as road tax, this is misleading. The tax isn’t on the road: it’s on the vehicles that use it. Road tax was abolished in the 1930s and the cost of maintaining the UK’s roads is currently covered by general taxation, not specifically VED.

However, in his 2015 budget, then-chancellor George Osborne announced that a new road fund would be set up whereby all funds raised through VED will go into the building and upkeep of the UK’s road system. This new system was implemented by Rishi Sunak in his 2020 budget, but scheduled road works are likely to be pushed back as a result of the coronavirus outbreak.

The VED system based on vehicle emissions was introduced in 2001 as part of a push to reduce pollutants being released into the atmosphere. Vehicles emitting more pollutants cost more to tax, as part of efforts to persuade drivers to consider buying cleaner vehicles.

How VED has changed from April 2020

The changes coming into force as of April 2020 were drawn up as a means of enhancing the appeal of electric vehicle ownership.

The government has uprated VED in line with the retail prices index (RPI) for cars, vans, motorcycles and motorcycle trade licences, but the biggest change, and the one that will be felt most by motorists and traders, is the switch from using NEDC emissions testing as the basis for the various tax band tiers to the new WLTP system.

This new method is said to deliver more realistic readings for a vehicle’s fuel consumption, emissions output and driving range, and will result in vehicles moving up a band and becoming, on average, £5 more expensive to tax annually.

From 6 April, benefit-in-kind car tax has been removed for electric vehicles, as part of a move to incentivise fleet managers and company car drivers to choose zero-emission models.

Further incentive comes in the form of the removal of the £320 ‘expensive car tax’ for electric cars costing more than £40,000, which means anyone buying a new electric car from 1 April will save £320 per year for years two to six of ownership - a total saving of £1600.

The exemption is set to be in place until 31 March 2025 and ongoing ‘expensive car’ payments for cars bought before 1 April 2020 will be scrapped.

The old system will still apply to vehicles registered before 1 April 2017.

See some examples of these changes at the end of this article.

If your vehicle was registered before 1 March 2001, then the engine size in cubic centimetres (cc) is what’s important.

• Cars with engines equal to or smaller in capacity than 1549cc (roughly equivalent to 1.5 litres) have to pay £145 a year, assuming they pay up front for 12 months.

The exact amount due can vary slightly, depending on whether you pay for six months or 12 months, and whether you pay all at once or in instalments. You can see a full breakdown of the charges by going to the DVLA website.

If your car is newer, and was registered between 1 March 2001 and 1 April 2017, then it’s the emissions that you need to think about.

Petrol- and diesel-powered cars are the most commonly taxed vehicles and they’re categorised by bands that are determined by their CO2 emissions. Prices vary slightly depending on how you pay – in one go, or in instalments. The table below shows the prices for six- and 12-month cycles and you can see the full breakdown by going to the government’s VED website. 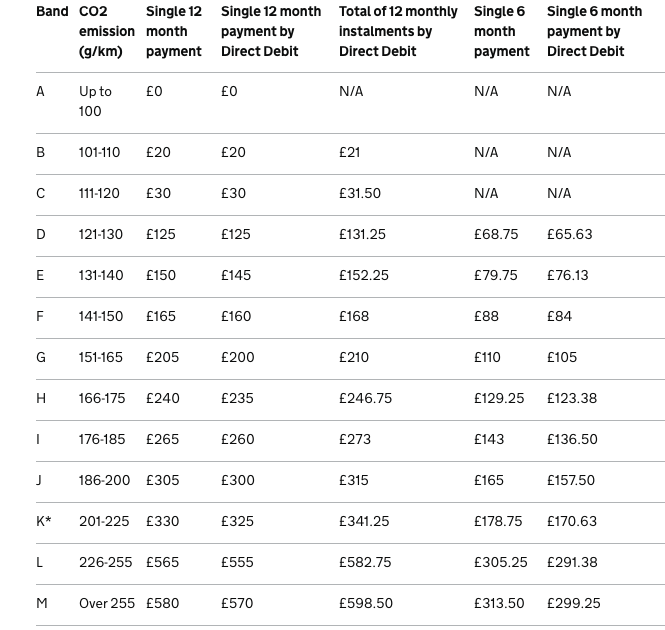 *Includes cars that have a CO2 figure higher than 225g/km but were registered before 23 March 2006.

If your car is powered by an alternative fuelling system, then the charges are slightly different but based on the same premise. Alternative-fuel cars include hybrids and vehicles that run on biofuel or a variant of gas, such as LPG or CNG.

Once again, the costs vary slightly depending on how you want to pay. 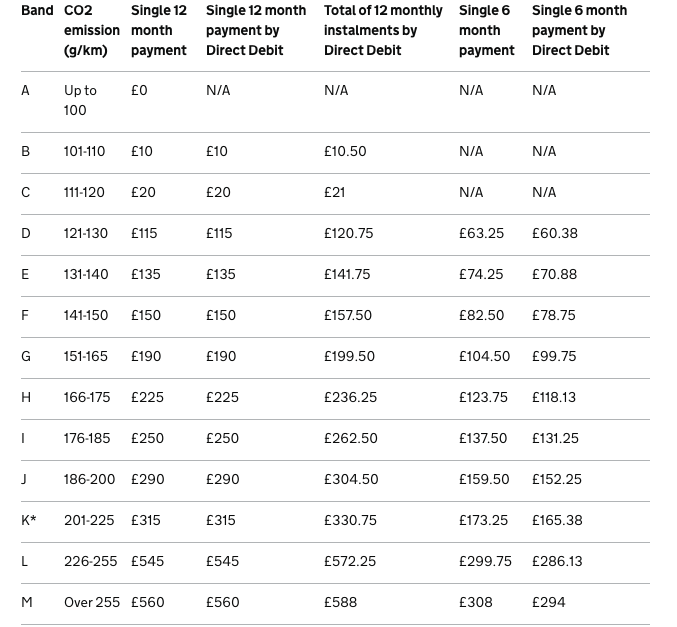 *Includes cars that have a CO2 figure higher than 225g/km, but were registered before 23 March 2006.

TAXING FOR THE FIRST TIME

If your car is brand new and you’re taxing it for the first time, then the costs are slightly different again. The below prices are only applicable the first time a car is taxed. After that, it follows the tables above.

The system rewards drivers of new, low-emitting cars with a lower-than-usual payment for the first year, but it smacks high-emitting vehicles with a fairly stiff initial charge.

The prices are for 12 months and are payable only in a single payment. You can see further details here. 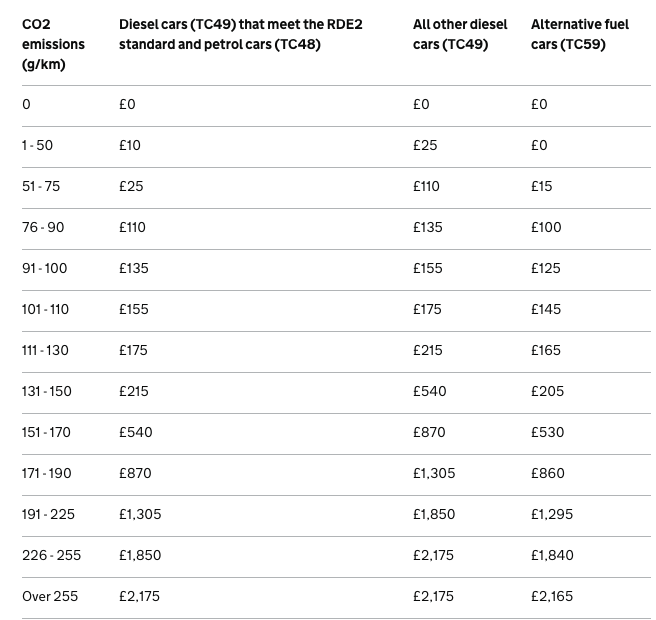 Goods vehicles and motorbikes have their own VED system, which you can find more about here.

Once you’ve figured out what you owe, you can pay your VED in a variety of ways.

The simplest method is online at https://www.gov.uk/vehicle-tax, using a credit or debit card. You’ll also need one or more of the following documents to hand:

• The car’s V5C registration document, which must be in your name

If you’d rather use more traditional methods, you can pay over the phone by calling 0300 123 4321. There are charges for this call, which you can read about here.

You can also pay at any post office that can process vehicle tax. You’ll need to bring one of the following:

• The car’s V5C registration document, which must be in your name

You may also need your MOT test certificate, valid for the start of the new tax period, and a valid Reduced Pollution Certificate if the vehicle has been modified to cut its emissions. In Northern Ireland, you’ll need to bring your insurance certificate or cover note.

From a financial point of view, the best position to be in is to be exempt from paying any VED, and if you’re in any of the following categories, you don’t have to pay anything. The following are exempt from car tax, and have been since before the changes took place:

• Vehicles used by a disabled person

If you own a car but you don’t drive it on public roads, then you’re also exempt, although you’ll have to declare it to the DVLA. This is called a Statutory Off Road Notification, or SORN, and you can declare it here. Be aware that if you don’t let the DVLA know that you want the car registered as off the roads, you’ll be liable for road tax even if the car doesn’t move. Conversely, if you want to take the vehicle back onto public roads, you’ll need to pay the appropriate amount of VED first.

Unless you’re in the above categories you’ll have to pay. Well, almost – if your car is particularly green and emits less than 100 grams of carbon dioxide (CO2) per kilometre (g/km), then it is also exempt. But everyone else will need to cough up.

Unlike in the past, you don’t need to wait for a tax disc to be sent for display in the vehicle’s window. The tax disc system was abolished in 2014.

It’s important to note that VED no longer transfers to a new owner when you sell or buy a car. The new owner will need to tax the car afresh and they’ll need to do so before they drive the car.

Some examples using the new system: 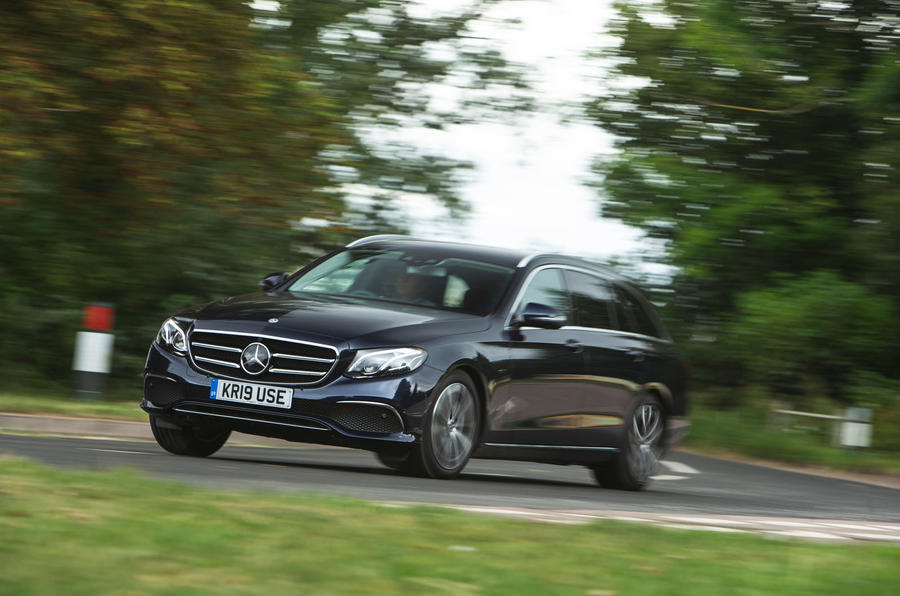 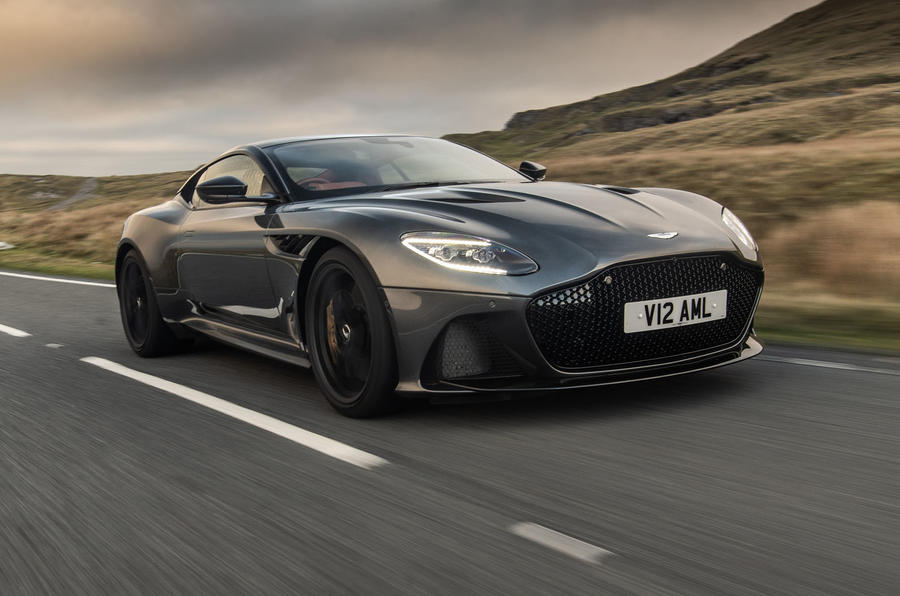 Budget 2020: How the government’s plans will affect motorists​

Even if you accept that VED should be based solely on CO2 emmissions, which in itself is absurd, the system takes absolutely no account of vehicle usage.  I have a Jag XE diesel which, on paper, emits 111 g/km and an Aston Martin V8 Vantage which, on paper, emits 328 g/km.  They cost £30 and £570 respectively to tax.  I drive the Jag about 25,000 miles (40,234 km) a year and the Aston about 4,000 miles (£6,437 km).  The Jag therefore emits 4,466 kg of CO2 in a year and the Aston 2,111 kg.  I’m being taxed less than 0.7p for every kg the Jag chucks out, and 27p for each kg the Aston produces – forty times as much.  Where’s the justice in that?  I’m hardly the first to say this, but it would be so simple just to abolish VED and put an appropriate level of duty on fuel.  The amount of fuel a vehicle uses per mile is proportionate to the amount of CO2 it emits – that’s basic chemistry – and if you drive it five times as far you use five times as much fuel and pay five times as much fuel duty.  It’s really not rocket science.

2014-2016 Diesels are the ideal vehicle according to the Govm

The tax system still doesnt address the fact that a Euro 6 diesel pre-2017 will usually have <120g CO2, will still be able to drive into London, and will use less fuel (and thus less fuel tax).

However, these are pre-emission scandal cars and likely producing far too much particulate and NoX.

Why complicate and confuse?

So now we have at least five different methods of applying road tax depending on the age of a vehicle, with wide disparity in methodology and cost. The system is totally unjust, positively encouraging the use of older gross polluting models and discouraging some newer zero emission ones.

I've often thought the same, especially when I ran a car that was 1 g/km outside the £30 bracket and as such cost £115. It was the lowest tax car I could afford and I thought the hike in price from £30-£115 was ridiculous especially as I do less than 6k a year. But it is what it is, seems really at odds now though that you pay the same annual amount irrespective of pollution level, so a Prius and if under £40k a V8 Mustang are the same annual tax rate with just the purchase tax differing, which will be absorbed by the monthly PCP anyway. Seems ridiculous
View all comments (8)