BACK TO ALL NEWS
Currently reading: 456bhp Renault Zoe e-sport driven flat out on track
UP NEXT
Fisker goes radical with Pear EV SUV

What's it like driving a pumped-up supermini that can out-accelerate a Porsche 911 Turbo S to 130mph? We head to France to find out
Open gallery
Close

It’s a baking hot day in the south of France and there isn’t any air ventilation to cool the cabin of the Renault Zoe e-sport.

In fact, there’s not much inside this electric car at all: two pedals, a steering wheel, a digital readout, plus a trio of rotary switches that can be configured to unleash its full 456bhp and 472lb ft performance – sufficient, I later discover, to provoke wheelspin at 70mph.

You might recognise this Zoe e-sport from its debut at the Geneva motor show or its more recent appearance at the Goodwood Festival of Speed. The one-off prototype has got more in common with Renault’s e.dams Formula E racer than with the standard version of the zero-emissions supermini. The e-sport’s two electric motors, one on each axle, share the racer’s high-capacity permanent magnet technology, although together they ensure the e-sport produces 184bhp more than the single-seater’s motor, which is restricted by Formula E rules.

The car’s body is carbonfibre and its tubular chassis is built by racing specialist Tork Engineering. It uses double wishbone suspension at the front and rear, with Öhlins four-way adjustable dampers. The car's aggressive design is more aerodynamic than the standard Zoe, with a front air dam, flat undercarriage, rear diffuser inspired by the Formula E car’s and a carbonfibre rear spoiler. Inside, it's a proper racer, with a pair of Recaro bucket seats, harnesses and myriad electronic gizmos, although Renault has hidden the latter behind both a solid wall and the car’s rear tinted windows to stop anyone catching a glimpse.

This stripped-out cabin might suggest the car will be a featherweight, but thanks the two 20kWh lithium-ion battery packs located on its floor that contribute 450kg, it tips the scales at a hefty 1400kg. Still, all that torque ensures the Zoe e-sport is capable of accelerating to 62mph in 3.2sec and, more staggeringly, can race from 0-130mph in under 10 seconds. This makes the e-sport quicker on paper than a Porsche 911 Turbo S.

To find out what that savage and gear change-free acceleration feels like, and to gauge its implications for the future of hot-hatches, we’re at Circuit du Laquais. This hidden asphalt gem is located in the hills of Auvergne-Rhône-Alpes, about 35 miles southeast of Lyon. 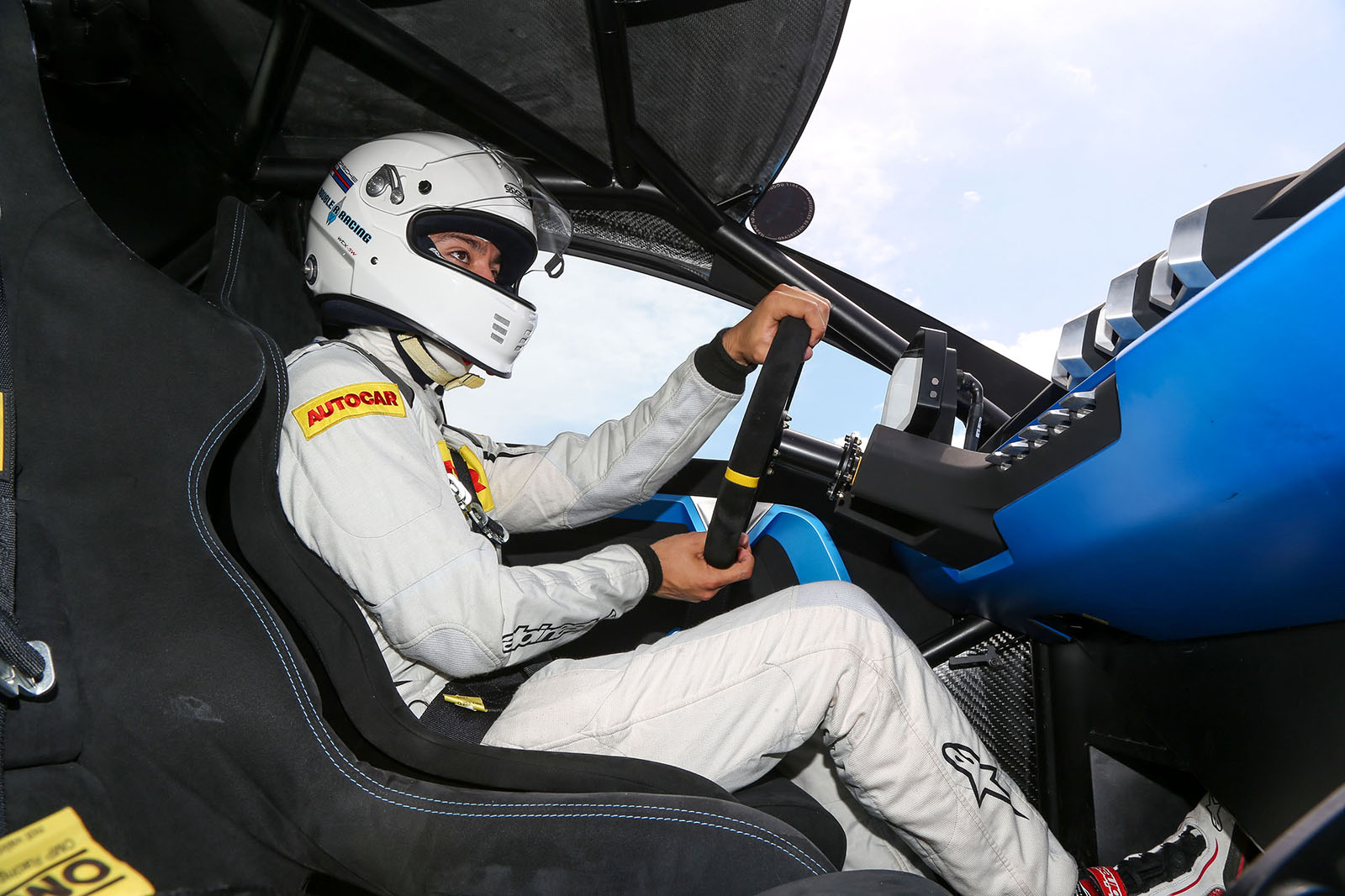 The engineers provide a thorough briefing before allowing me onto the track. The car’s AP Racing brakes, they explain, are proper racing items and therefore unassisted, the electric power steering has a habit of cutting out without notice mid-corner and the chassis set-up is still a work in progress. Oh, and the batteries I’m sitting on might spontaneously combust if I forget to do a cool-down lap before returning to the pits.

Turning the e-sport on is relatively simple: you click the key, which is slotted into the centre of a big red kill switch between the seats, rotate two of the three rotary switches to engage drive and enable maximum power (the third switch controls brake bias and is left in the ‘safest’ setting), and release the handbrake. While stationary, the only sound is a highpitched whine like an old analogue TV, but much louder. Gently squeeze the accelerator, however, and this is accompanied by the even louder and slightly deeper whir of the motors, as well as a gearbox drone that’s deeper still and follows the pitch changes of the motors as the car’s speed builds. 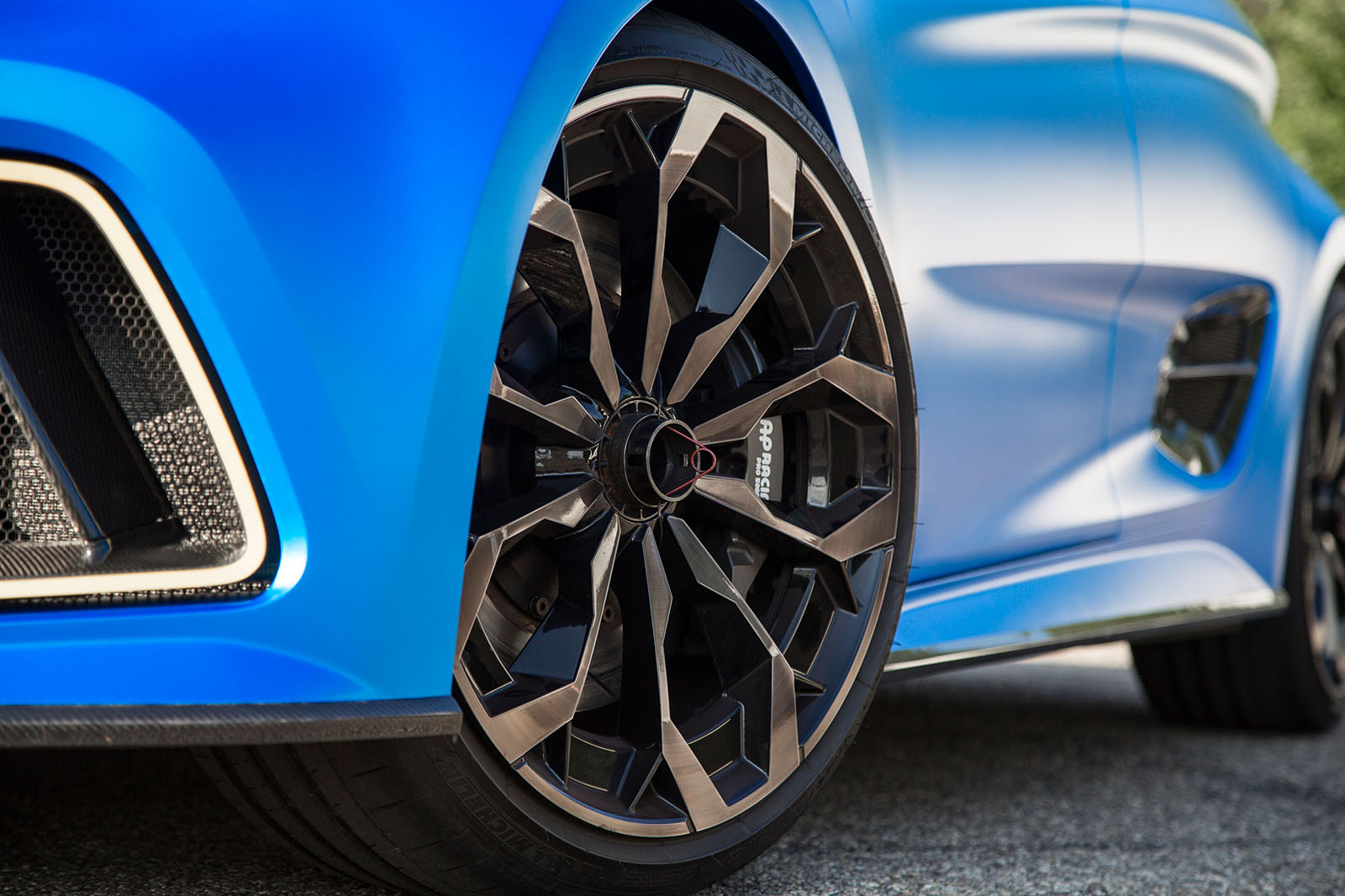 The sound bears no comparison to a race-tuned internal combustion engine, but the relative lack of noise is forgotten when the responses of the drivetrain are first felt. The motors, while independent from each other, offer such instantaneous reactions that they both feel like they’re connected to the microscopic hairs of your big toe. The smallest of flexes is met with zero-delay power delivery, so you soon forget about the missing mechanical vibration through the airwaves and instead revel in the car’s hyper-reactivity.

At moderate pace, it feels razor-sharp, and prodding the throttle at 50mph, 60mph or even 70mph is met with a sudden rise in drivetrain tone as the road-legal Michelin Pilot Super Sport tyres, which are fitted to 20in wheels, break traction and over-rotate before biting into the track surface and propelling the car forward. This addictive, unbroken acceleration is comparable with only the most exotic of supercars.

The acceleration would also be the most likely culprit if the Zoe e-sport were to end up in the gravel trap or, worse, wrapped around the lone tree in the circuit’s infield. Applying power with the slightest of steering lock on makes the front tyres scream, pushing the nose wide and leaving me wide-eyed as I unwittingly angle the only Zoe e-sport in existence at a strip of grass and tyre wall. Reeling off lock and backing off the throttle prevents embarrassment. Once I recognise that the car has significantly more power than grip and that I have to be gentle with steering inputs while accelerating, the e-sport begins to work with me. 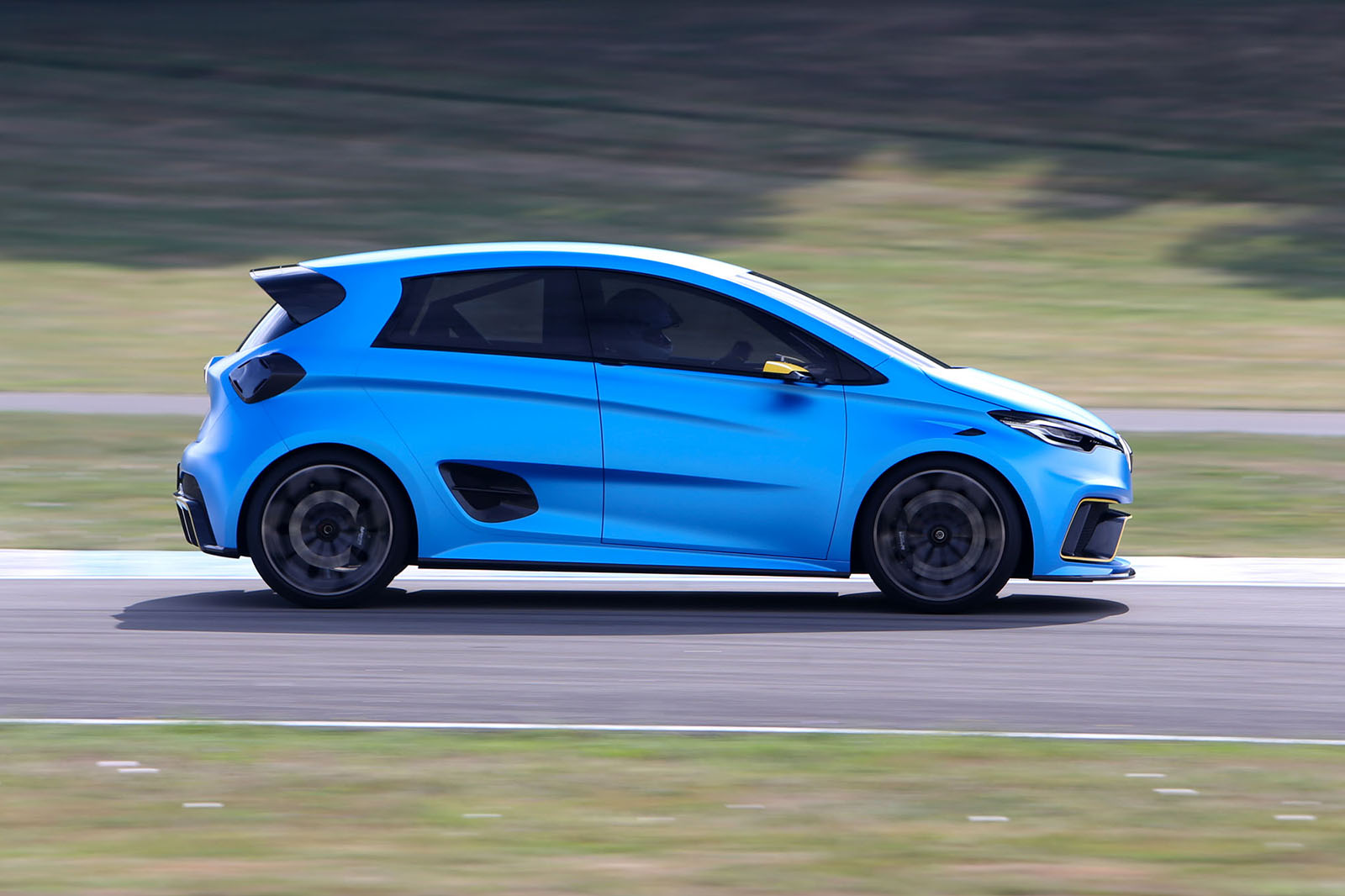 Fun as it all is, most challenging issue facing the Zoe e-sport – driving range – never escapes me. The engineers reckon that, flat out, the car will use about 10% battery per lap – which, with an out lap and cool-down lap, equates to just eight times round the circuit. A hot hatch has to be able to survive longer stints while having its neck wringed, but solving this range issue is no easy task. It's not like fitting larger batteries would be easy, due to the compact design of a hatchback and the weight implications.

The Zoe e-sport shows us that electric hot hatches lack the ability to mix flat-out performance with longevity. Battery technology is some way off that. But this experience does at least suggest that once electric hot hatches do become viable, they will be exhilarating to drive.

Lacks the ability to mix flat-out performance with longevity

That tells us all we need to know about the current state of the art of high performance electric cars. This car is no more than a publicity stunt - an effective one nevertheless!

Flat out performance with longevity?

Tesla Model S has excellent flat out performance and longevity and has the best 0 to 60 of any production car. The current state of high performance electric cars are more than good enough for 99.9 % of people who don't race around a track.

Its not a publicity stunt, a

Its not a publicity stunt, a publicity stunt is anouncing a tiny amount of money to "make Britain a world leader in electrice vehicles" more than 10 years after the current leaders in electric vehicles started devloping their products. Or annoucing something everyone knows, like that all vehicles will be electric by 2040. Renault is simply showing the motoring press the potential of an electric hot hatch - how far theyve got so far in developing one. Clearly there are some problems to overcome, just as, for instance there are some problems to overcome when it comes to electric vans and trucks.

It IS a publicity stunt: how many people own a Zoe in the UK? Or for that matter in France?

A one-off machine endowed with enormous power that lasts as long as a Saturn 5 booster is useless! Now a reasonably-powered car that drives fast-ish for 300 miles (Polo GTI style?) would be a much more significant development!

Are we likely to see that? don't hold your breath: not even Tesla are able to sustain the image they have created. EVs have a future, of sorts, but not for a long while yet AND the $1M question is still unanswered: how will the electricity be generated to charge all these vehicles?

Thing is, with 456bhp it's not really a hot hatch, is it - it's basically a junior supercar.

Longevity would be considerably better with a more sensible 200-320bhp and battery cells designed for energy density rather than power (40-odd kWh from 400kg is poor - a Tesla battery of similar weight would pack around 70 kWh).

Without brake regen all energy used in acceleration is promptly waste fully turned into brake heat at the corners. Regen might get 25% of that back. And I doubt you spend 100% of track time at 100% power (this is not a Morris Minor). Could you stomach say 15 laps? Of course Renault could also use a quick swap battery pack to help solve the track range dilemma!