BACK TO ALL NEWS
Currently reading: 2016 Bugatti Chiron - every detail on the Veyron's 260mph+ successor
UP NEXT
Jeep Renegade and Compass gain mild e-Hybrid variants

2016 Bugatti Chiron - every detail on the Veyron's 260mph+ successor

The new Bugatti Chiron, the successor to the original Veyron, was revealed the Geneva motor show this week.

Previewed by the Vision Gran Turismo concept car at last year’s Frankfurt motor show, the immensely powerful Chiron aims to occupy the position its highly celebrated predecessor held at the very top of the supercar ladder, one rung above the McLaren P1, Ferrari LaFerrari and Porsche 918 Spyder – all of which have now ceased production.

Bugatti describes the second of its modern day models as the most powerful road car to ever reach series production. However, with volumes set to be limited to 500 and a price to match its extreme performance at an eye watering €2.4 million (about £1.9 million) it will remain out of reach for all but the seriously rich.

As before, top speed is limited in two stages; the so-called handling mode allows 236mph before the electrics step in, and the top-speed mode provides a maximum of 261mph, eclipsing the Veyron by 7mph.

The chassis of the Chiron is a clear development of the Veyron’s. In a bid to improve ride quality without compromising body control, it adopts an adaptive suspension system, providing variable ride height and damping control.

In combination with variable characteristics for a new electro-mechanical steering system and the four-wheel-drive system, the driver can choose between five driving modes: Lift, Auto, Autobahn, Handling and Top Speed.

The Lift mode increases the ride height for speed bumps, while in Auto, Autobahn and Handling modes the top speed is limited to 236mph. To engage Top Speed mode, the Chiron requires a ‘Speed Key’, which alters the engine management system to provide the claimed 261mph maximum.

Reining in the vast performance are 420mm front and 400mm rear carbon-ceramic discs grabbed by eight-pot and six-pot calipers respectively. They provide the Chiron with a claimed 62 to 0mph in 31.3m, 124 to 0mph in 125m and 186 to 0mph in 275m – in each case eclipsing the various claimed braking distances of its predecessor.

Borrowing strong visual cues from the earlier Veyron, the new Chiron features an even more dramatic design with tauter surfacing, bolder details and added aerodynamic efficiency than that of the car it replaces. The man credited with the new appearance, Bugatti design boss Achim Anscheidt, says it was developed in close collaboration with Bugatti’s engineering team to ensure greater functionality without any loss in overall impact. 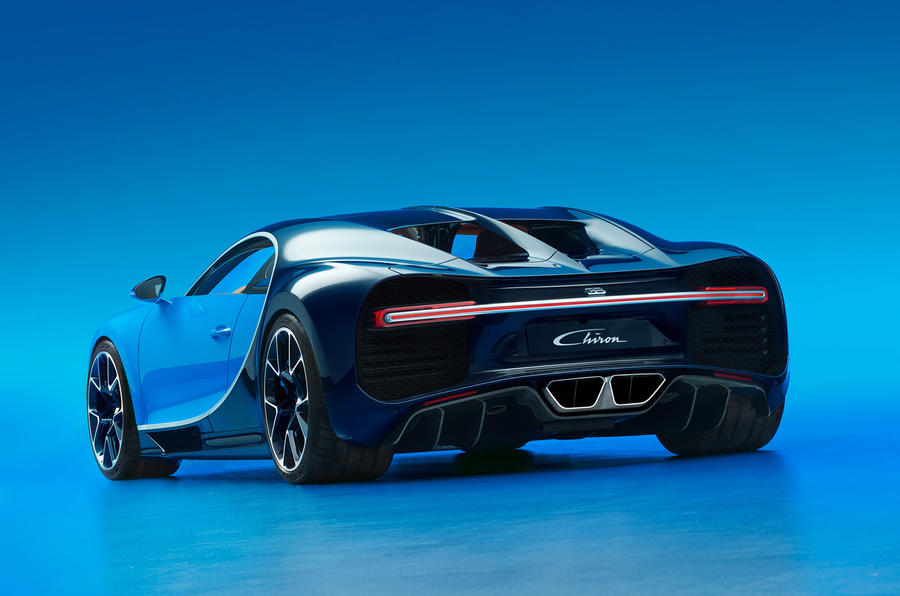 Key design elements include a race-grade front splitter, large horizontal air ducts, a traditional horseshoe-shaped grille sporting a Bugatti badge fashioned from silver and enamel, distinctive LED headlamps – each with four individual lenses and integrated air ducts that feed cooling air to the front brakes, shapely front wings and a flamboyant semicircular sweep of bodywork extending from the trailing edge of its front wheelarches back towards the rear and into the A-pillars – the latter flourish clearly inspired by the look originally established by Jean Bugatti on the iconic Type 57.

As on the Type 57, there is also a prominent centre fin running from the top of the grille across the bonnet and into the heavily rounded roof, providing an important contribution to the Chiron’s longitudinal stability, according to Bugatti. A NACA duct formed by shapely rear pillars replaces the individual air scoops used by the Veyron, channeling air into the engine bay more efficiently and with less turbulence than on its predecessor.

It is at the rear where the more significant differences in appearance between the Veyron and Chiron are apparent, with a strong trailing edge, fully integrated rear spoiler, full width LED light band housing the tail lamps, indicators and reserving lamp, sizeable air ducts, large central mounted exhaust and race grade diffuser providing the new Bugatti with a particularly purposeful appearance from behind. 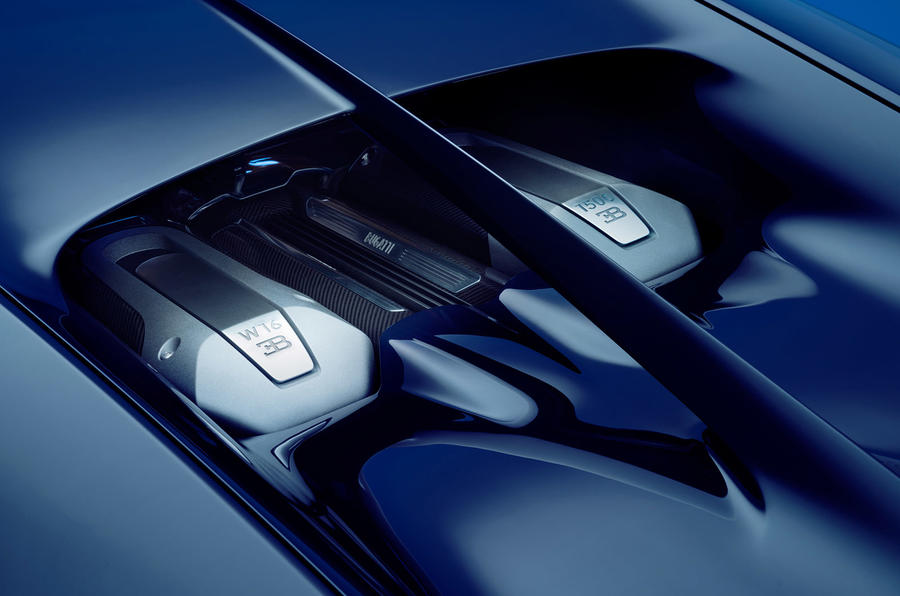 The basis for the new Bugatti is provided by a newly developed carbonfibre monocoque structure of the same standard as that used in Audi and Porsche's LMP1 cars. In a departure from that used by the Veyron, it adopts a sandwich construction for the floor and a carbonfibre-reinforced plastic engine cradle at the rear for added stiffness and lower structure weight. Yet achieving the sort of stiffness achieved by the latest LMP1 race cars, the Chiron is155kg heavier than its predecessor at 1995kg.

The increase in width has brought greater space to the two-seat interior and in particular the front wheel wells of the Chiron, according to Bugatti. Greater height has also liberated 12mm extra headroom compared with the Veyron.

The cabin is trimmed in a combination of leather, carbonfibre and brushed aluminium. Among the new developments is a passenger airbag that deploys through carbonfibre – a first for a production vehicle.

The Chiron will be assembled at Bugatti’s headquarters in Mosheim, France. So far, Bugatti has received more than 150 orders for the new car, and deliveries will begin in October.

Further variants of the Chiron are planned to be launched, including successor models to the Veyron Grand Sport, Veyron SuperSport and Veyron Grand Vitesse.

The Chiron name is taken from the 1920s and 1930s grand prix racer Louis Chiron, whose notable results included victory in the 1931 French Grand Prix at the wheel of a Bugatti Type 51. 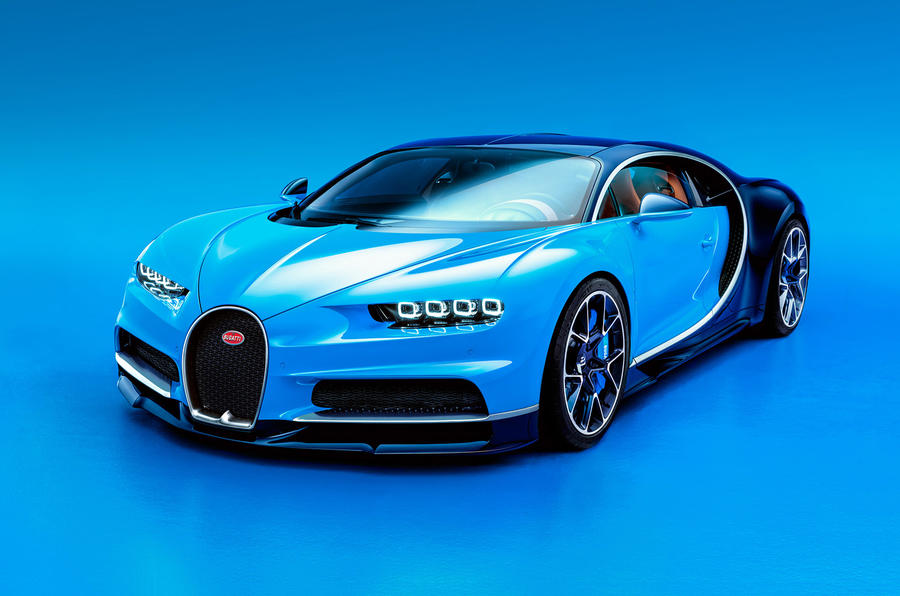 Announcing the new model, Dürheimer said: “The Chiron is the quintessential ultimate super sports car: ultra-modern, incredibly fast, agile and powerful with a stylistically demanding design and the highest possible levels of comfort. This combination is not offered by any other market player and gives Bugatti its unique market position.

“Our customers form an exclusive group of automobile collectors who are searching for the very best. With the Veyron, they have the best production sports car of the past 10 years. This is why their demands and expectations for our next step – the Chiron – were so high.

“With the Chiron we will not only be providing a key emotional element for the image of the Volkswagen Group but will also be making a positive contribution to Group results.”

Interestingly, Bugatti says that the Chiron’s 261mph top speed is “by no means the end of the road” for the car – hinting that even more may be possible in the future.

"Where others have stepped Bugatti has gone one step further. We have taken the boundaries even further - there are no boundaries we haven't pushed. The Chiron is a new superlative in the automotive world.

The new model racked more than 310,500 miles in development testing. A total of 30 test mules were build while the car was honed. Officials have admitted that the Gran Turismo concept car was a direct preview of the new model.

Blog - Why we should celebrate the new Bugatti Chiron

This is a heavily facelifted Veyron, nothing else and is anachronistic before it is launched. The W16 engine is a relic from the late 90s. Looking forward to seeing it get nailed in the 0-100 acceleration by the P100S Tesla in development for 1/20 the price.
ersatz 5 March 2016

This is a heavily facelifted Veyron, nothing else and is anachronistic before it is launched. The W16 engine is a relic from the late 90s. Looking forward to seeing it get nailed in the 0-100 acceleration by the P100S Tesla in development for 1/20 the price.
ChironSupersport 28 March 2021

Don't compare a unique hypercar with an even rarer and engine that is the masterpiece that is known as the W16 to a poorly built and unreliable car your wife would drive! :)

Neither hot nor cool.

I object to Autocar labelling this as one of the hottest new cars of 2016. 'Hot' suggests mass appeal and likely to sell well. I can't see the average man in the street wanting, or being able to afford, one of these unless, of course, I haven't kept pace with the average wage paid in this country.
ChironSupersport 28 March 2021

It was at the time a brand new Bugatti. Now it's one with the pioneering 0-400-0km/h World Record and an even more historically significant one having set the first full factory manufactured hypercar to achieve 304.773MPH. Your inability to purchase one is irrelevant. This car is HOT in 2021! :)