Skoda may have been handed the mammoth responsibility of developing upcoming small electric cars not only for its own brand but also for Volkswagen (ID 1, ID 2) and Seat (‘Acandra’), but it isn’t neglecting the original crew - very much including the Skoda Fabia.

This is the new and much-changed Fabia, which straight away looks quite a handsome car in light of its lowly and very much unchanged status as the wallet-friendly supermini in the Skoda line-up. It goes on sale in September from around £15,500 (about £19,000 as tested) and will rival the likes of the Peugeot 208, Ford Fiesta, Renault Clio and Toyota Yaris – all of them impressive in their own ways.

While the competition in this class is fierce, the fourth Fabia since the model’s inception in 1999 should be easily the most capable of its lineage yet (spoiler: it is), not least because of the platform it uses. Volkswagen Group’s MQB-A0 chassis also serves the Audi A1 and Volkswagen Polo and Volkswagen T-Cross, and you’d expect it to allow for better road manners than before, aided by improved torsional stiffness in the body, which now uses a much greater proportion of high-grade steel.

The new platform also brings extra interior space. Moving the Fabia on from the veteran PQ35 chassis, which was deployed for the Mk5 Volkswagen Golf, has allowed the wheelbase to grow by 94mm, meaning there’s more leg room in the back of the car. At 380 litres, the new boot is also an exact match in terms of raw capacity for the current Mk8 Volkswagen Golf and beats the Ford Focus – both cars firmly in the class above what is now the Czech brand’s entry-level model, after the Skoda Citigo was retired. The Fabia’s Tardis credentials seem assured.

With the new platform comes a lightly revised engine line-up. It still consists mostly of 1.0-litre three-cylinder petrol units in either MPI (naturally aspirated) or TSI (turbocharged) forms, and these range from a measly 65bhp to a more reassuring 109bhp. In the lower ranks, a five-speed manual gearbox is your only option, but higher outputs bring the choice of having either a six-speed manual or a seven-speed dual-clutch automatic (DSG).

At the top of the range sits a solitary 1.5-litre four-cylinder TSI unit with 148bhp, and paired with the DSG ’box only. We’ve tried this particular engine before in other VW Group wares and we like its blend of potency, smoothness and economy. However, Skoda suspects most buyers will opt for one of the triples, which along with both gearbox options are built by Skoda in the Czech Republic. Given the Fabia is also put together in one of Skoda’s Czech plants, it means that despite the VW Group umbrella that sits over the brand, the car is built very much ‘in-house’ by automotive standards.

Note finally that diesel, which Skoda championed with the original Fabia vRS, is nowhere to be seen, and won’t make an appearance on the upcoming Fabia Estate, either. Neither will any mild hybrids, for that matter – they’d push up the price too much. 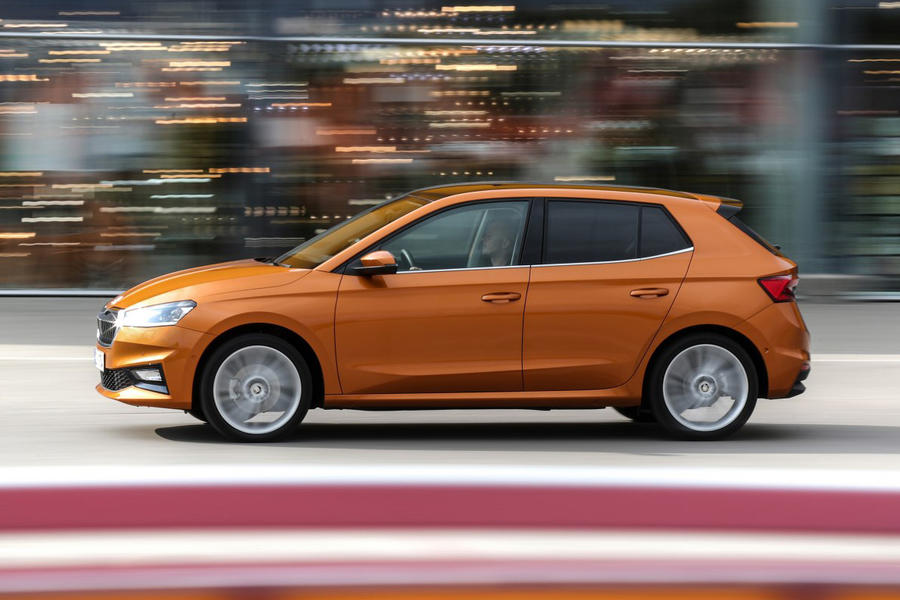 By far the biggest changes to the Fabia are found inside the cabin. In higher-spec models the digital array is borrowed from more senior Skodas, with a 9.2in touchscreen sitting front and centre. It can be paired with a fully digital instrument binnacle, though it’s also possible to have the car with analogue dials and a tiny 3.5in infotainment display, for the authentic bargain-basement experience.

The rest of the layout borrows heavily from the latest Skoda Octavia, and with its woven fabrics and Saffiano-style texturing for the more obvious hard plastics – notably for the entire dashboard upper and windowsills – the Fabia possesses a very credible sense of maturity. Our well-equipped test car (heated steering wheel, but no wireless phone charging) also had a bronze vane running across the dash, and with the panoramic roof and very faintly exotic two-spoke steering wheel Skoda now favour, it all combines to make the car feel characterful and interesting and generally very fresh.

Skoda’s ‘Simply Clever’ approach to innovating in mundane but useful ways also continues with the new Fabia. There are smartphone pockets in the back of the front seats, various nets and partitions in the split-level boot (plus a hammock, for loose items such as – I don’t know – watermelons), a little rubbish container that slots into the front door bins, and the usual pen holsters, card holders and the ice scraper neatly affixed to the inside of the filler cap. There’s also a USB port in the back of the rear-view mirror, for charging any windscreen-mounted devices, plus two more in the front cubby and a further pair for back-seat passengers. You can also have device mounts that clip onto the back of the front headrests, to provide some low-rent rear-seat entertainment via nothing more serious than a smartphone.

More broadly, this is an unusually spacious car by the standards of the segment, though taller rear-seat passengers would still rather you’d gone for the Octavia instead. The front berths feel expansive, and with plenty of adjustability in the driving position, the Fabia genuinely feels like something from the class above, but the back bench remains supermini spec, albeit with more leg and head room than most.

Alas, the 109bhp 1.0-litre TSI engine in our test car is less convincing. It’s muted enough under gentle loads, the throttle pick-up is reasonably clean for a turbocharged three-cylinder and on the move it’s just about torquey enough for the odd overtake, too. But it’s a joyless, monotone thing, especially when paired with the long and insipid throw of the no-nonsense six-speed manual transmission. If you want three cylinders, three pedals and something that represents more than just A-to-B transport (even if only slightly), Ford ’s Ecoboost Fiesta still leads the way in this class, and by some distance.

As for the naturally aspirated MPI engine, unless it is the difference between you paying a three- or a four-figure sum for insurance, we’d avoid it altogether, because the performance is simply too weak on roads where most new cars now have more than 150bhp. Meanwhile, the four-cylinder 1.5-litre will probably prove to be the pick of the range if you can afford to have it, and the Fabia is certainly grown-up enough to suit such an engine, but it won’t arrive until at least spring next year.

But what about a vRS version, not only for the brand diehards but also for anyone who simply wants their Fabia with some extra punch, both visual and mechanical? Don’t bet on it. Skoda says demand would be strong in the UK and Germany but that won’t be enough to swing the business case.

And the company has a point. This fourth-generation Fabia would take an awful lot of work to get the chassis to the stage where you might punt the car down a good B-road for the fun of it. The body rolls generously, the rear axle isn’t particularly well supported, and while the featherweight steering is sensibly geared, it’s obviously been engineered first and foremost for easy city driving.

Instead, the Fabia’s dynamic appeal lies in its unexpectedly fine ability to isolate passengers from road noise and most other interruptions. It also absorbs poor surfaces without fuss, the suspension gently cushioning the body and transmitting very little of the grumbles and bangs even quite badly potted surfaces usually generate. Progress is serene, even on the second-to-largest 17in wheels. Were the suspension – MacPherson struts up front, torsion beam at the back, with passive dampers – any softer, you might well have a problem with body control on quicker roads, but Skoda seems to have judged this very well, at least for a certain sort of driver.

We’ll only know for sure once we get the Fabia back in the UK, but it could well be the most fluid-riding car in the class. 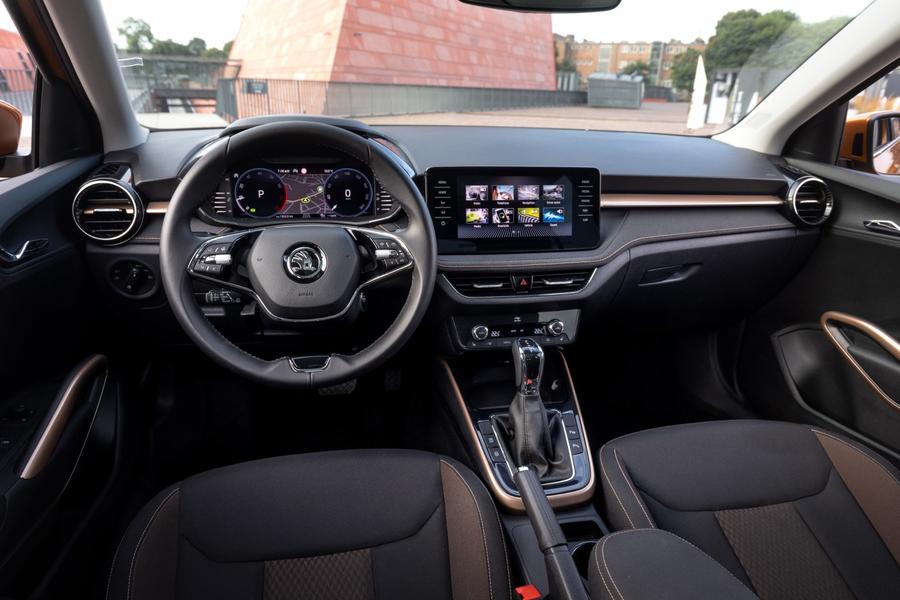 Prices haven’t been announced yet, and the Fabia’s new chassis, with the improved electronic architecture it brings, will surely make the fourth-generation car noticeably more expensive than its forebear.

That said, the most junior Skoda has also grown up quite a bit with this generational change, so in reality you’re getting something that feels more Focus-sized in its spirit and road manners, only with a smaller footprint. That might suit a lot of people, not least because the Focus and its many competitors are now all quite large cars.

Those buyers won’t be in it for the driving experience, sure, but with its easy-going nature and high levels of practicality and convenience – still Skoda’s reason for being – the Fabia will be very difficult to beat at its own game. 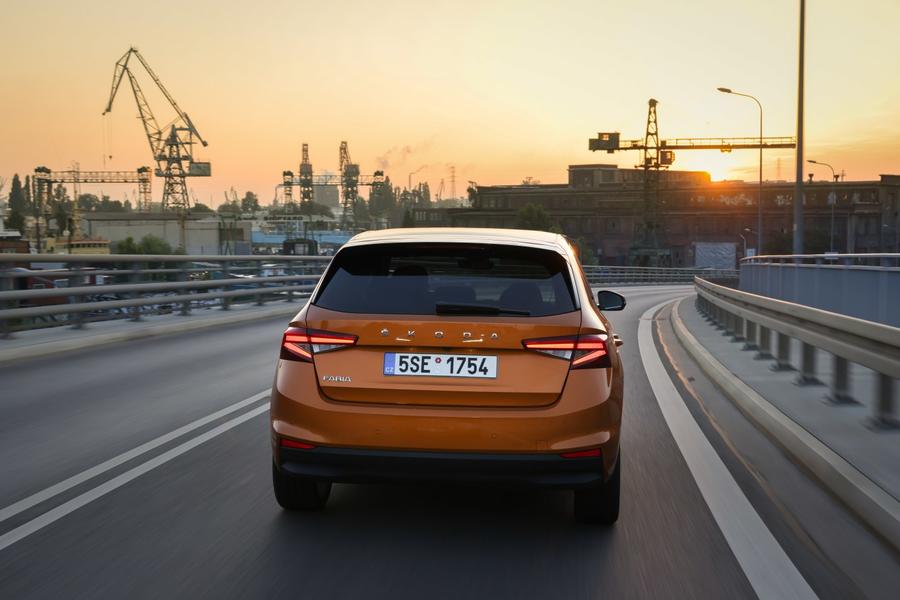 The decision to market the larger engine (TSI 150 PS) with a dual-clutch gearbox baffles me!

I drive An IBIZA with that engine but mated a 6-speed manual gearbox (my choice) and quite frankly, it is a match made in heaven!

Pootle along in 5th or 6th at virtually tick-over revs and then drop into 3rd for a blast past some traffic or just for fun before slotting straight back into 6th: there is ample torque to do that!

There must be a good explanation: anyone out there?

Why would people particularly be bothered about the smaller foorprint of this Fabia compared to say a Focus?

I'd be much more concerned about its external dimensions.