From £23,8485
All-electric seven-seater is rarity among MPVs, and for good reason: the Nissan e-NV200 Evalia is pricey and still has limited usability. Expect to see plenty as city taxis and delivery vans, though
Open gallery
Close

The Nissan e-NV200 Evalia 7S is Nissan’s other passenger-car EV. Didn’t know they had a second one? That may be because this one’s based on a commercial vehicle: it’s a seven-seat MPV based on the e-NV200 electric van. But whether you knew of it or not, it’s just had an upgrade timed to coincide with the launch of the third-generation Leaf.

At just over 4.5 metres in length and 1.8 metres tall, the Evalia is ostensibly an electrically powered take on the commercial-convert people-mover: so a zero-emissions alternative to a Ford Grand Tourneo Connect or Citroen Berlingo. It hasn’t been through a renewal process as thorough as the Nissan Leaf’s, so its 107bhp electric motor, its chassis and its suspension stay more or less as they were.

But the big news is the inclusion of a new 40kWh drive battery coming in to replace the old 24kWh one, but which is no larger than the old one and therefore fits into the same space as the old one did. The difference that makes is a 60% improvement in battery range, which rises to 174 miles on the outgoing ‘NEDC’ test cycle or 125 miles by the new ‘WLTP combined’ test measure. 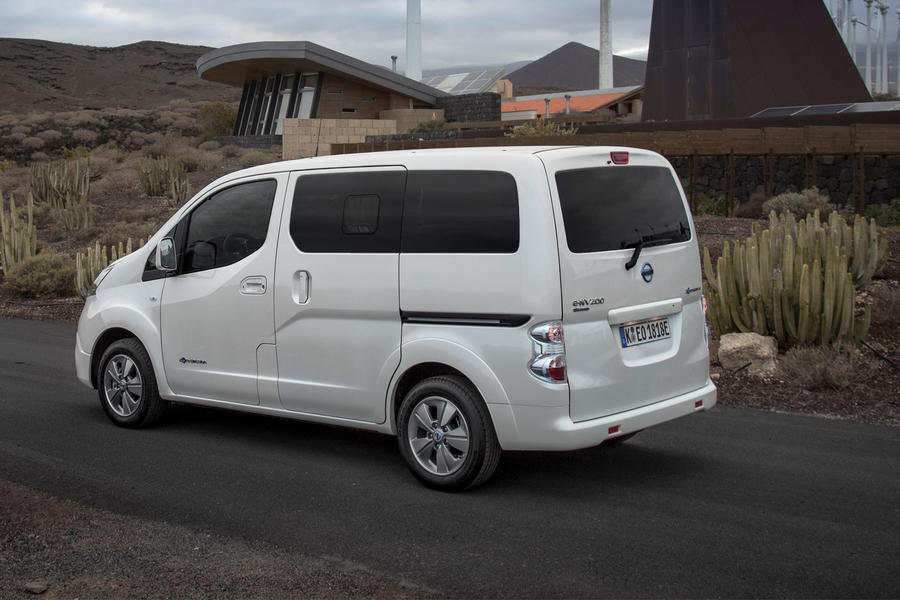 The Evalia’s smoothed-over panels and large, rounded features make it look a bit like it belongs in an animated movie by Pixar; particularly so in the white of our test car. ‘Quirky-looking’ might be how you’d describe it if it were yours. But then, lucky for Nissan, this isn’t a part of the new car market where buyers are sensitive to such things.

Being van-derived and based on a product almost a decade old, the Evalia has a cabin that’s at once basic and quite cheap-feeling; which is no great criticism, though, since it’s just the way cars like this are. You get a digital instrument screen which looks small and a bit antiquated by the standards of the latest passenger car digital instrument displays, though it’s easy enough to read.

Up front you sit in a driving position that feels slightly compromised, being very upright and positioning you close to the pedals but also at a distance from the steeply raked steering wheel. You feel, frankly, like you’re driving something in which the available loading length behind your seat is more important than the passenger’s comfort in front of it. Which, of course, is entirely true. Trouble is, other comparable cars don’t make that commercial vehicle link plain in quite the same way.

In the Evalia version, though, instead of a loadbay behind the driver there are three roomy second-row seats accessed via sliding side doors – and behind them, two third-row chairs that fold and stow upwards against the sides of the boot when not in use. The third-row seats are a bit fiddly to manhandle and don’t offer particularly generous legroom, but they’re more spacious than in some so-called seven-seaters – and even when in place, they leave enough space for a decent haul of bags and small cases in the boot. With all the seats folded meanwhile, Nissan states that you can squeeze in three full-sized mountain bikes having left their front wheels attached, and longer stuff too (kayaks, ballistic missiles, railway locomotives and the like, at a guess) if you fold the front passenger seat down as well. This is certainly a car with the potential to move both people and cargo in plentiful supply.

Realistic expectations are required to appreciate some, if not quite all, of the characteristics of the e-NV200’s driving experience. That there’s plenty of low-down, low-speed torque available from that electric motor, however, is absolutely plain. The car picks up pace from urban speeds with gusto – much more, in fact, than you’d get from an economy diesel seven-seater – though its performance feels less and less assertive the farther you go beyond 50mph. By the time you close on the car’s electronically limited top speed of 76mph, it feels considerably less strong than its combustion engine equivalent might. A small comfort, perhaps, to think that at least it won’t be e-NV200 van drivers rushing up behind you well beyond the national speed limit in the outside lane of the motorway.

The other drawback of travelling at motorway speeds in this car is the remarkable amount of wind noise intrusion it suffers from. Having a particularly upright cabin profile, large door mirrors and commercial-grade door seals not intended for the last word in refinement, the Evalia would give you the impression you were driving through a storm-force gale even when conditions were clement.

The car’s ride is equally rudimentary: with leaf springs and a torsion beam suspending the rear of the car, it handles smooth roads adequately enough but is easily upset by fairly low amplitude bumps, and generally makes life less comfortable for those travelling in the rear than you’d ideally like. Handling is more decent: with a weighty drive battery carried down low, the car manages its mass fairly tidily around sharpish bends, though that tricky driving position would make it such a demanding car to physically set about if you were in a hurry that you’d be unlikely to be in a hurry for very long.

As for real-world range – probably the big question for anyone genuinely considering whether this car might fit into their family’s life – it’s certainly markedly improved, but perhaps not by enough to make the Evalia widely suitable as a private buy.

While a 106-mile range was claimed for the outgoing version, this was by the soon-to-be-replaced ‘NEDC’ lab test driving cycle; in mixed real-world use, electric range was more like 80 miles – which plainly wasn’t enough for plenty of van drivers and MPV customers alike. The new version’s 40kWh battery delivers a genuine range in the region of 110-120 miles. Our test was indicating just over 200km of available battery range at full charge, which proved a broadly realistic estimate as our test route went on. Given the car’s also ‘ChaDeMo’ DC fast-charge compliant, that would make it usable on short-range trips and occasional well-planned longer runs. Probably not quite justifiable as a family’s bigger primary mode of transport, though. 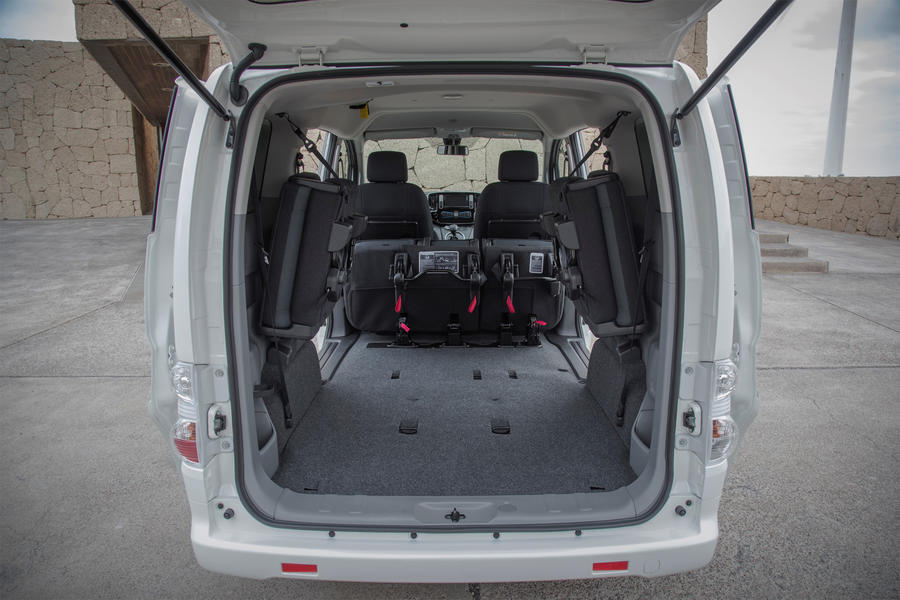 The e-NV200 has sold in very small numbers as a passenger car since 2014, and on this evidence will probably continue to do so. Even after the UK Treasury’s sales incentive, it’s still likely to cost 25% more than an equivalent petrol- or diesel-engined MPV rival if prices on the outgoing car are a reliable guide to those of the new one (which were to be confirmed as these words were written).

And while a private buyer could recoup much of that extra cost on running cost savings, this still wouldn’t be an easy car to run in many ways. The appeal of a utility vehicle like this is bound up, after all, in how unconditionally practical it is. And there’s little that would feel practical about waiting at the motorway services for an hour for a fast charge to finish, while mud-spattered and exhausted, on your way home from a family mountain biking expedition.

Still, that shouldn’t be much of an obstacle in the way of the wider success of the e-NV200. Expect to see an increasing number of these serving as ‘last-mile’ city delivery vans in European capitals that are currently setting up central zero-emissions zones (London, Paris, Madrid and others, to be phased in from 2019). The car should also be popular as a seven-seater taxi in many of the same cities, where new emissions restrictions come into play.

There is clearly a market for the all-electric seven-seater, then – and while it won’t be the passenger car market for this particular example, I’m not sure how much Nissan should care. Europe will be crying out for the e-NV200 within a couple of years, whether MPV owners know much about the car or not. 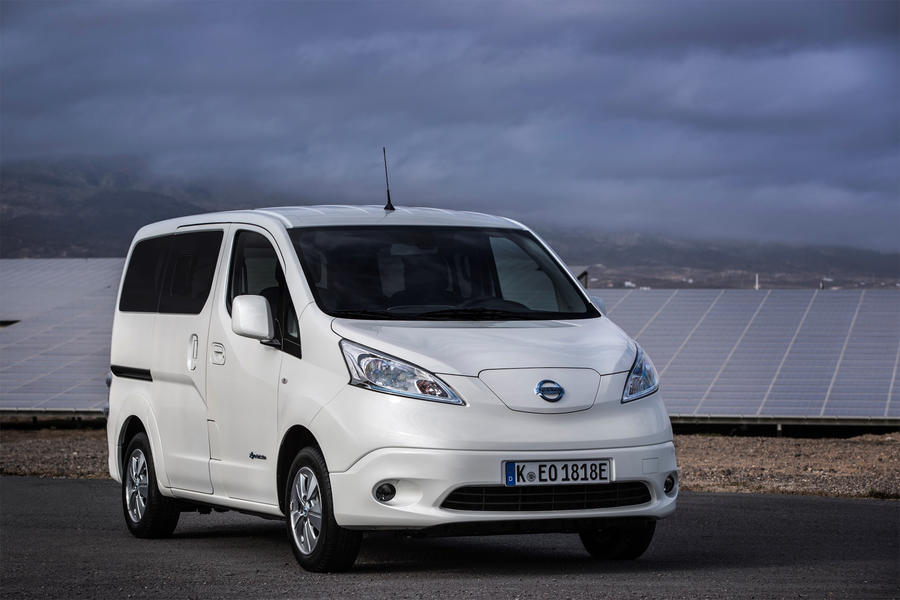