9
A110 gains power and handling precision, but do these traits improve the recipe or merely alter it?
Open gallery
Close

You might imagine the only question that really needs answering is whether the new Alpine A110 S is 'better' to drive than the basic A110 of five-star road test fame.

And fair enough. Initially it seems as though that is very much Alpine’s intention for this fresh variant of its lightweight sports car. The ‘S’ moniker, the 40bhp power bump, the firmer, shorter springs and stronger anti-roll bars, the larger brake discs and wider tyres are all exactly the sort of things manufacturers do when they want to make an existing model quicker and, as they always tell us, even better to drive.

But the official line is that this A110 S – driven here in the UK for the first time, although we've previously sampled it on much drier Portuguese roads – is simply another version of the A110, and one better suited to track days. Nothing more, nothing less; there is no hierarchy. Alpine says the original A110 turned out almost exactly as intended, so it hasn't needed to introduce a more serious model to flush through some improvements.

The firm even expects the slower car to outsell the S three to one – a surprise, given that the £56,810 asking price for the A110 S is a reasonable-sounding £7000 more than you’d pay for a comparably equipped A110. For the record, the car you see here also has £2208 worth of lovely carbonfibre roof (easily visible because it barely meets your bottom ribs) and £936 of forged ‘Fuchs’ wheels. Along with other options, it comes out at £63,000 – about the same as the resurrected six-cylinder Porsche Cayman GTS.

The two rivals will surely meet here at some point in the future, but if you think the Cayman’s new naturally aspirated 4.0-litre flat six makes it the obvious choice against the four-cylinder Alpine, think again. The A110 S is still the only one of these two cars that uses double-wishbone suspension all round, and the only one with an all-aluminium construction. In short, the French car is the more exotic: a mid-engined supercar shrunk in size, performance and price, but perhaps not in personality. At only 1114kg, it's also much lighter than the Cayman. 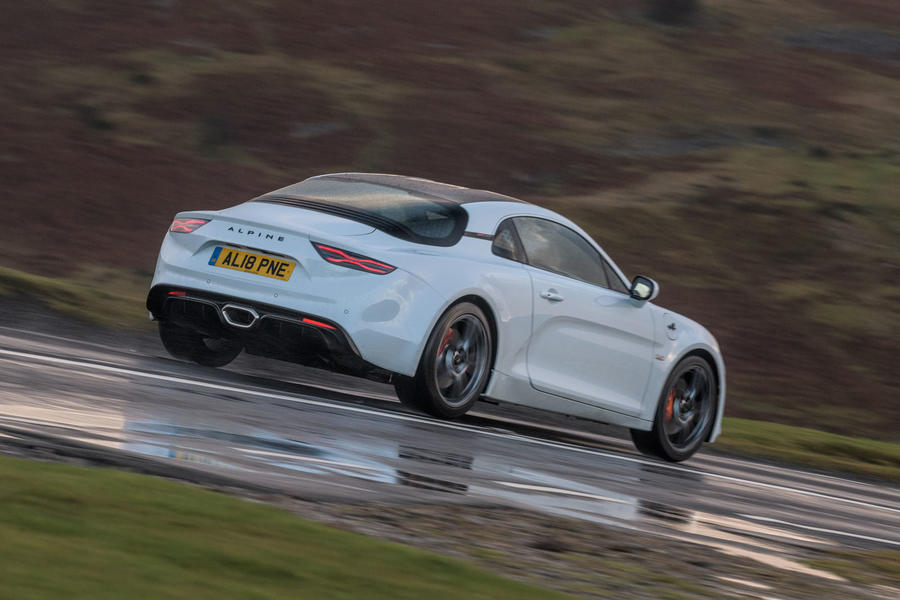 Inside, the A110 is almost entirely as before, save for the Dinamica (synthetic suede) upholstery and door plaques that were once mini tricolores (quite cool) but now provide a flash of orange and carbonfibre. Very light Sabelt seats combine with plenty of adjustability in the steering column to give a driving position that still feels a centimetre of two too high but is otherwise good. However, just to nitpick, given this is a track-ready take on the A110, why is only the upper portion of the wheel trimmed in Dynamica and not the whole thing?

On the outside, the A110 is still a fine-looking thing. Orange brake calipers and black badging will tart the car up too much for some, but the curvaceous shape and edgy stance say much about the driving experience: it doesn’t take itself too seriously but, equally, is ready for serious drivers. And this is where it gets interesting, because once you’ve fired up the throaty 288bhp 1.8-litre turbo engine, it takes all of about three Welsh corners to know beyond doubt that the A110 and the A110 S are surprisingly different in character.

Blunty, those two-thirds of A110 owners will be better off with the non-S car. The S's steering is usefully more direct and when these little mid-engined machines are at their wonderful best, elegantly taking apart B-roads, you’re also far less likely to ground the diffuser vanes, but on the road the firmer suspension diminishes the outstanding fluidity of the base model – arguably the A110's defining characteristic.

The difference isn't all that subtle, either. Although the S does eventually gel beautifully, the energy needed to get the chassis into its sweet spot of pliancy and control doesn't so much require you to flirt with the speed limit, as is the case with the A110, but leave it in tatters. There’s also less roll oversteer with the stiffer setup (in Alpine’s case, roll oversteer being a good thing) and in the wet you’ll generally get more understeer.

Admittedly, that all sounds like a lot of negatives, but they’re only small negatives observed in the context of the brilliant – and plainly more road-focused – standard A110. The S is still very much a car you could drive all day and not get bored, and one that demonstrates that moderate performance needn’t detract from the fun and can, if you have the right priorities, actually add to it. We know that from front-wheel-drive hot hatches, and the Alpine, even in S form, does the same for mid-engined rear-drivers, and does so like nothing else.

The power increase itself feels nominal, and that's because torque – the more useful commodity on the road – hasn't changed from 236lb ft, because the dual-clutch gearbox won't reliably handle much more. That torque is, however, now offered from 2000rpm all the way to 6400rpm, although this doesn't change the fact that the powertrain is probably the least impressive element of the A110 package. It's a tool to get the chassis going. 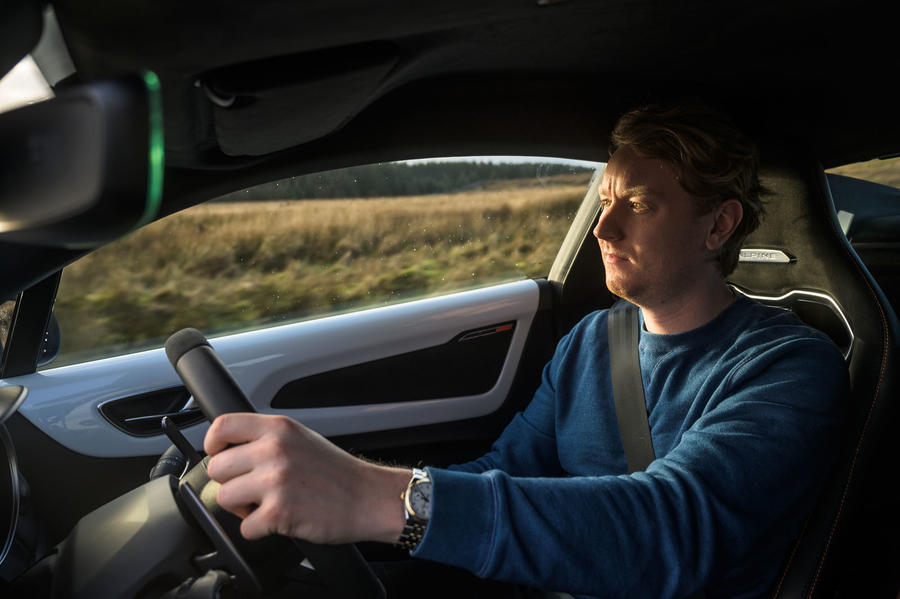 If you're likely to do track days, you should consider the A110 S. If not, you'll find it less tolerant of half-measures when you’re out on the road simply to have fun. Its long-range road manners are also considerably inferior to that of its ‘lesser’ sibling, making it less usable day to day.

The original A110 has an uncanny ability to double up as a GT car, because it's so supple as well as being decently spacious inside and capable of almost 45mpg on the motorway. With the S, you're only getting two of those attributes.

This is still a brilliant sports car, just one clearly intended more for track work than road pleasure. And that, in fairness, is exactly how it's being sold. 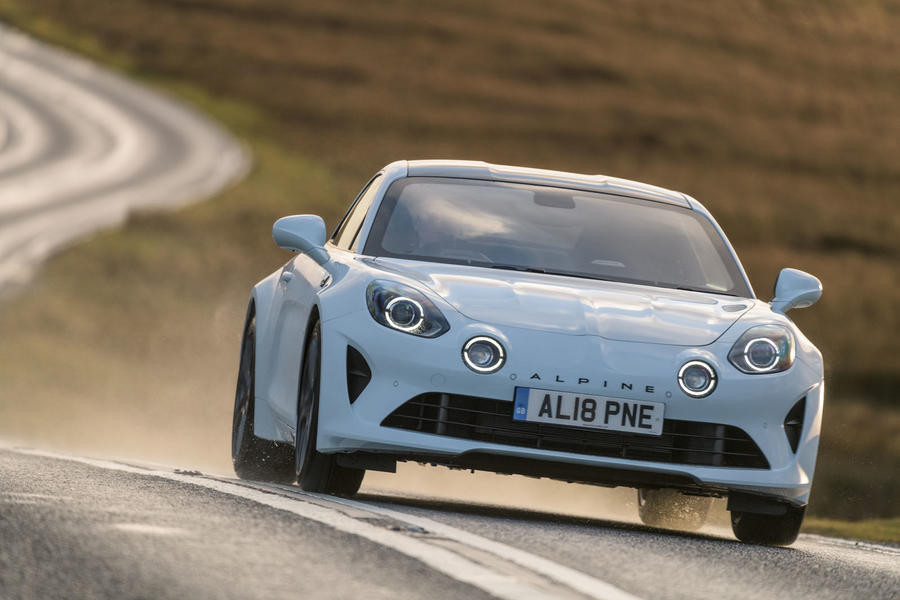 Fantastic blog on Alpine A110 S

This blog on Alpine A110 S is really extraordinary. I really like the review of the  car.

Flip me, never new the price

Flip me, never new the price was so close between this and the new cayman GTS, I would go for the better made, more thought through, been in business longer, make an impression car, all day, (just in case you think that means porsche).

I dont even think it's close, I'd go with a manual, flat 6 cylinder engine over a automatic, four cylinder Alpine for my sports car. I want involvement of all my senses. The new GTS will do all those things
View all comments (10)