9
Share review
The latest Alpina gives nothing away to the BMW M5 in terms of power and torque. Here we test the estate version
Open gallery
Close

In lieu of the genuine article, the Alpina B5 Biturbo Touring is as close as we will get to a BMW M5 Touring for the current G30 generation.

The B5, which we've already driven in saloon form in the UK, is therefore quite a proposition. In fact, this take on an openly practical 600bhp 5 Series could be even more enticing than a certified M Division ware. The tiny marque's milder, more understated approach to going extremely fast better suits the family car brief, and the 5 Series Touring is the definitive family car.

The build process involves several straightforward but detailed steps. You take the four-wheel-drive chassis of the M550i and with it the 4.4-litre twin-turbocharged petrol V8 originally introduced for the 750i. You then tune the set-up to deliver an ideal blend of performance, comfort and dynamism, the trick being not to focus too heavily on one attribute.

It's this breadth that makes Alpina products so desirable and, at near-enough £100,000 for this particular model, expensive. It's also how you explain the existence of a car that is simultaneously capable of 202mph, has a Comfort Plus mode and could, at a push, fill in for a Ford Transit on moving day.

‘Tune’ is underselling it, really. The B5's front wishbones are entirely redesigned to exact an additional degree of negative camber, improving both steering feel and roadholding. And although the B5 can’t disengage its front driveshafts like an M5, the set-up is programmed to ladle more torque rearwards more of the time – indeed, up to 90% of it.

The steering action is also given a little more meat just off-centre to impart a touch more confidence through 170mph autobahn sweepers. The ZF eight-speed automatic transmission has been strengthened to negate the need for a momentary hiatus in the torque delivery during upshifts. The rear-wheel steering, which uses actuators to angle the contact patch either for low-speed agility or high-speed stability, has been carefully revised. There are shorter, stiffer springs at the front, with wholly bespoke dampers, and the exhaust system benefits from less back pressure.

Alpina finishes things off with an interior trimmed in the same wonderful Lavalina leather chosen by Rolls-Royce. In fact, our test car is conservative relative to what's possible. Visit the factory in Buchloe, Bavaria, and you'll see examples with deeply tanned leather, platted cream piping and wooden inserts so rugged you'd swear they had been ripped off the nearest tree. It's pure Brothers Grimm. 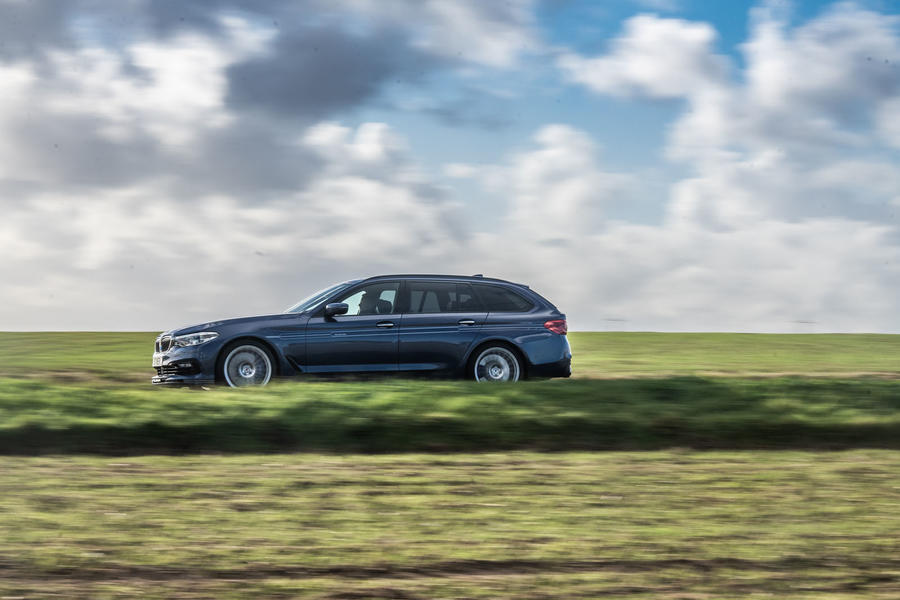 Aesthetically, the B5 Touring starts from a strong base – BMW’s largest wagon is already a handsomely proportioned device, long of snout and with a gently raked rear screen. Top-and-tail aerodynamic elements in the form of Alpina’s hallmark draping front splitter and ever-so-faint rear diffuser adorn the silhouette, but even so, next to the Audi RS6 Avant and Mercedes-AMG E63 Estate, the result is positively demure.

Except, perhaps, for the Deko Set pinstripes. With them, the B5 Touring isn’t quite so preposterously anonymous for a car so quick, but they’re a lovely touch and irresistibly whisper ‘1973 European Touring Car Championship’. If you’re into that sort of thing. Which, on the basis of option boxes ticked, most Alpina buyers actually aren’t.

Either way, Alpina’s aversion to skin-deep modifications becomes apparent as soon as the B5's forged 20in wheels begin to turn. In combination with the retuned suspension of the M550i donor car, now by air at the rear axle for the Touring, they help deliver the kind of ride that M5 owners must surely wish they had access to 90% of the time. It might have been better still had Alpina co-developed a 19in P Zero tyre with Pirelli, but homologating that size for such high speeds simply wasn’t realistic, given the cost and likely low demand.

Even so, driving over potholes is a dissociative experience, with the nerves across your backside not quite chiming with what you’ve seen disappear underneath the B5's huge bonnet. Progress is smooth, calm, quiet and steadfast. On anything larger than a narrow B-road, you’ll carry 30mph more than intended, such is the reassuring fluidity of this chassis, and yet there’s body control to spare, thanks in part to the presence of active roll stabilisation.

The M5 has better control of its body movements still, but that car is not only a freak of engineering but also corners so flatly that it can be difficult to establish a satisfying brake-steer-throttle rhythm without driving at senseless speed. As we’ve said on previous occasions, the B5’s steering and brakes are also more natural in their responses than the M car's.

A Comfort Plus mode specific to the B5 lends it an additional veneer of class when the road topography is gentle enough for it not to induce too much float. It works beautifully on motorway jaunts, where you can expect to achieve 30mpg at a cruise for a useful range of around 450 miles.

The B5 Touring doesn’t accumulate speed with quite the same enthusiasm as the saloon (at 2120kg, it's some 105kg heavier), but barely is there any need for that. Alpina’s reworking of BMW’s N63TU2 engine involves fitting a pair of twin-scroll turbochargers, a new intercooler, two additional water radiators and a wide-bore intake system. The upshot is 494lb ft from 2000rpm and an M5-topping 590lb ft between 3000rpm and 5000rpm.

As a result, in-gear performance is as unassuming as it is prodigious. There's firepower enough to show bona fide sports cars a clean quartet of exhaust tips, even with the 1670-litre load bay generously stacked, but the car’s bulk and ride quality numb the sensation of speed and dilute the drama. This approach suits the B5 Touring very well.

On the subject of size, the RS6 Avant bests the Alpina’s seats-down boot capacity by 10 litres and the E63 Estate usurps both with a truly cavernous 1820 litres. The Alpina does have a usefully secure underfloor storage compartment for the roller cover, though.

But what beguiles is the manner in which this four-wheel-drive estate, so accurate and neutral in its balance, will grip tenaciously then delicately over-rotate its rear tyres when the limits of adhesion are eventually breached. With the adaptive dampers firmed up, it's not at all defined by its mass in this regard. The heavily rear-biased torque split and a revised, more rear-biased brake balance giving it the grace of a purely rear-driven machine.

It's true that you can sense the air-suspended back axle working harder to support the extra metal atop it, as well as the greater lateral forces at play, but the B5's handling always feels within itself. Simply, you'd have to drive with little sense and sympathy to get an erratic response. 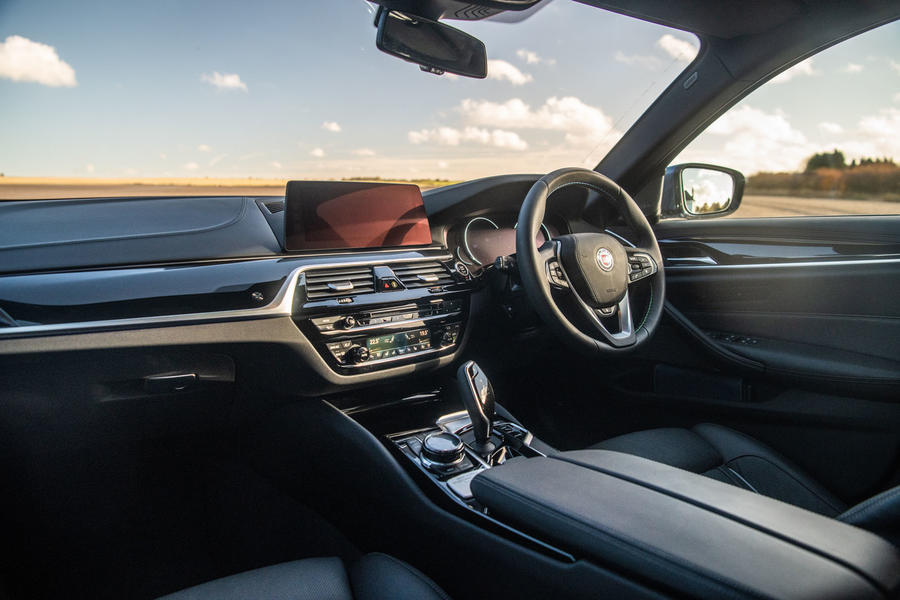 The price is £91,000 before options, and factor in an extra £1400 if you want the high-performance braking system from the M760i (desirable) and £2500 for a mechanical limited-slip differential (essential).

That's M5 money, granted, and with the B5 Touring you get neither the class-leading handling prowess of that car nor the cachet from a motorsport heavyweight. What you do get, though, is a companionable car, rich in personality, that will seldom, if ever, feel out of its depth. 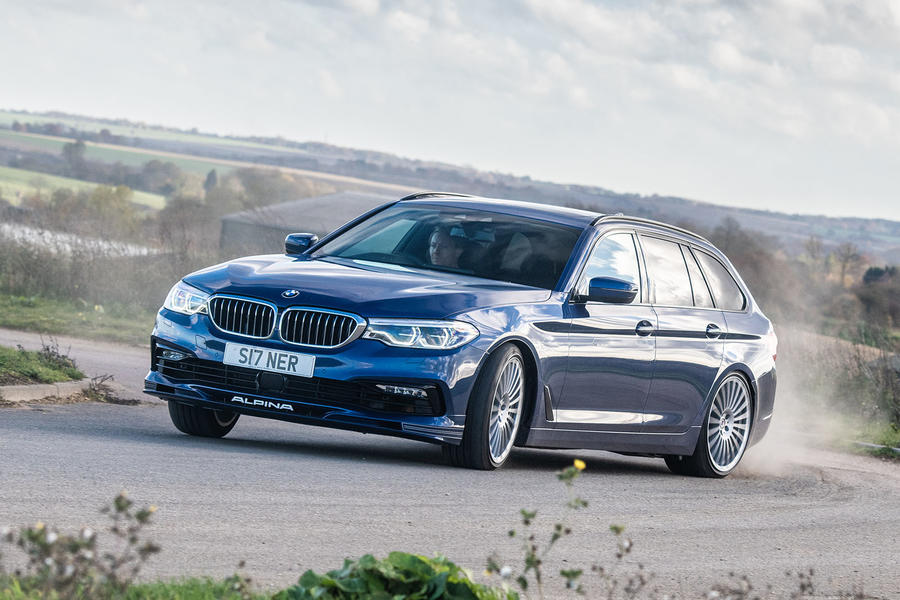 ...then I remembered that BMW don't do a estate M5...so yeah I've worked out why this exists. It certainly seems to have been thouroughly upgraded.

...then I remembered that BMW don't do a estate M5...so yeah I've worked out why this exists. It certainly seems to have been thouroughly upgraded.