BACK TO ALL NEWS
Currently reading: Maserati Quattroporte: latest spy pics
UP NEXT
EV chassis could provide a lifeline for niche car makers

These are the latest spy images of next year’s Maserati Quattroporte. The camouflaged car shows an elongated shape, and also indicates that the next Quattroporte is set to grow in size compared to the current car, which is 5097mm long, 1895mm wide and 1438mm high.

The images reveal snippets the new car's rear light design for the first time and show the Quattroporte's roofline, which will give the car a look akin to the Audi A7 Sportback.

The new look aims to give the Quattroporte a more expensive look to position range-topping versions in what Maserati calls the “super-luxury portion of the G-segment”.

Maserati is still to decide whether to launch its new V8 petrol-powered sports saloon at the Paris show in September, or wait until Detroit in January 2013.

Being developed under the codename M156, the new Quattroporte will shift upmarket to make space in the range for Maserati’s forthcoming mid-size saloon — a competitor for the Jaguar XF and BMW 5-series and known internally as Project M157.

The Quattroporte’s new smaller saloon sibling, which is aimed at top-spec BMW 5-series models and will get V6 petrols and diesel engines, will also go on sale in 2013. It has been reported in the Italian media that this smaller car will be known as the Levante.

Maserati insists the new Quattroporte will be based on a “new” platform, but it’s likely to feature elements of the Chrysler 300C in its structure.

It is also expected to employ the latest ZF eight-speed automatic gearbox, with a stop-start system, in place of the six-speed automatic that’s fitted to some current models. Updated versions of today’s V8 petrol engines will be carried over to the new car. 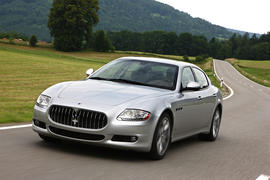 The Maserati Quattroporte has character, balance and a wonderful engine, but its ride and gearbox mean it’s ultimately flawed.

I can't understand why some commentators here are negative about the news that Maserati are bringing in diesel options. For the current owners and the pure petrolheads, the petrol versions will continue. They are bringing in the diesel engine to attract customers who are going for the high-end diesel versions of the big German saloons (am sure that number is considerable in Europe and markets where petrol is expensive than diesel) or are put down by the petrol-only variants on the current model. I agree that the current V6 in the Fiat range isn't suited but I'm sure FPT will have a newer & better one in the works.

The view that Maserati should only manufacture petrol-engine saloons will not help it to have a profitable business in todays world nor that producing a diesel-engine variant or a SUV will hurt its image. Porsche have diesel-engined models & SUVs in its range and its image is still strong. Maserati needs these to reach profitability..

Diesel in a fiery passionate italian sports saloon? that dosent seem right, if it was my choice it would be 8 cylinders no less!

Re: Next Maserati Quattroporte spied

OK, Porsche are wonderful! I did catch you sidleing up to Queen Vicky in the Bentley thread.