BACK TO ALL NEWS
Currently reading: C4 Picasso revamped for 2013
UP NEXT
GMC Hummer EV to be revealed tonight

A heavily revised, DS-influenced Citroën C4 Picasso will go on sale in the middle of next year as the company starts working with GM on its replacement
Share
Open gallery
Close
Share story

Citroën is preparing a comprehensive update of its current C4 Picasso MPV before an all-new version, co-developed with General Motors, is launched in the middle of the decade.

Autocar sources have revealed that the first models under the tie-up between PSA Peugeot-Citroën and GM will be a range of MPVs. These will include replacements for the Vauxhall Zafira, Peugeot 5008 and C4 Picasso range.

GM’s Bochum plant in Germany is expected to close when Zafira production ends in 2015/16, so the timing is right for the Zafira’s replacement to be manufactured in a PSA plant alongside its siblings. This would offer financial and capacity benefits for both firms.

Development of those cars remains at the embryonic stage, but the disguised C4 Picasso mule spied testing here in Spain shows that Citroën is preparing a thorough reworking of the car for sale in mid-2013, after a likely Geneva show debut in the spring.

Underpinning the new C4 Picasso will be the latest version of the PSA ‘PF2’ platform, which is used on the current C4 and DS4 hatchbacks in its latest guise.

The engine range will be familiar from today’s car and include 1.6 petrols and 1.6 and 2.0 diesels. Citroën may offer the all-wheel-drive diesel-electric Hybrid4 drivetrain, too.

The main changes will be to the exterior styling, and the quality and design of the interior. Expect DS influences in the exterior look, including a more distinctive front end.

Much of the latest C4’s interior is likely to carry over to the updated five-seat C4 Picasso, resulting in a more premium look and feel.

The bigger seven-seat C4 Grand Picasso is also due to receive similar updates at the same time. 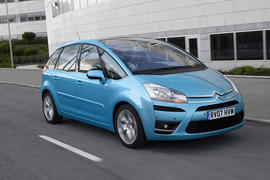 The C4 Picasso is an attractive, versatile and well-specified family car with an interior that make it the envy of many MPV-makers.

Just glad I don't need to have this sort of vehicle - it looks woeful and will doubtless drive even worse!

The only saving grace compared with the original Picasso is that it looks like you can determine the front from the back this time!