BACK TO ALL NEWS
Currently reading: Throwback Thursday: Suspension wonders of the 1984 Saab 9000
UP NEXT
New 2022 Polestar 3 officially previewed as launch nears

Saab's saloon had a 'highly advanced suspension system' that allowed it to 'combine excellent stability with ultimate handling'. We sat down with the company's suspension expert to find out how it worked
Open gallery
Close
Share story

In the late 1970s, Saab's executives decided that the company ought to introduce a new large saloon model.

However, the Swedish manufacturer was small and cash-strapped, so the development of a new model and associated new engine was prohibitive. Some 1200 miles south, Fiat was in a similar situation, with new saloons required for its Alfa Romeo, Fiat and Lancia brands. In 1978, the two companies agreed to team up, the result being the front-wheel-drive Type Four platform.

Aesthetically, there was very much a noticeable similarity between the handsomely boxy sibling models, all having been designed by Giugiaro, except for the Pininfarina-penned 164. 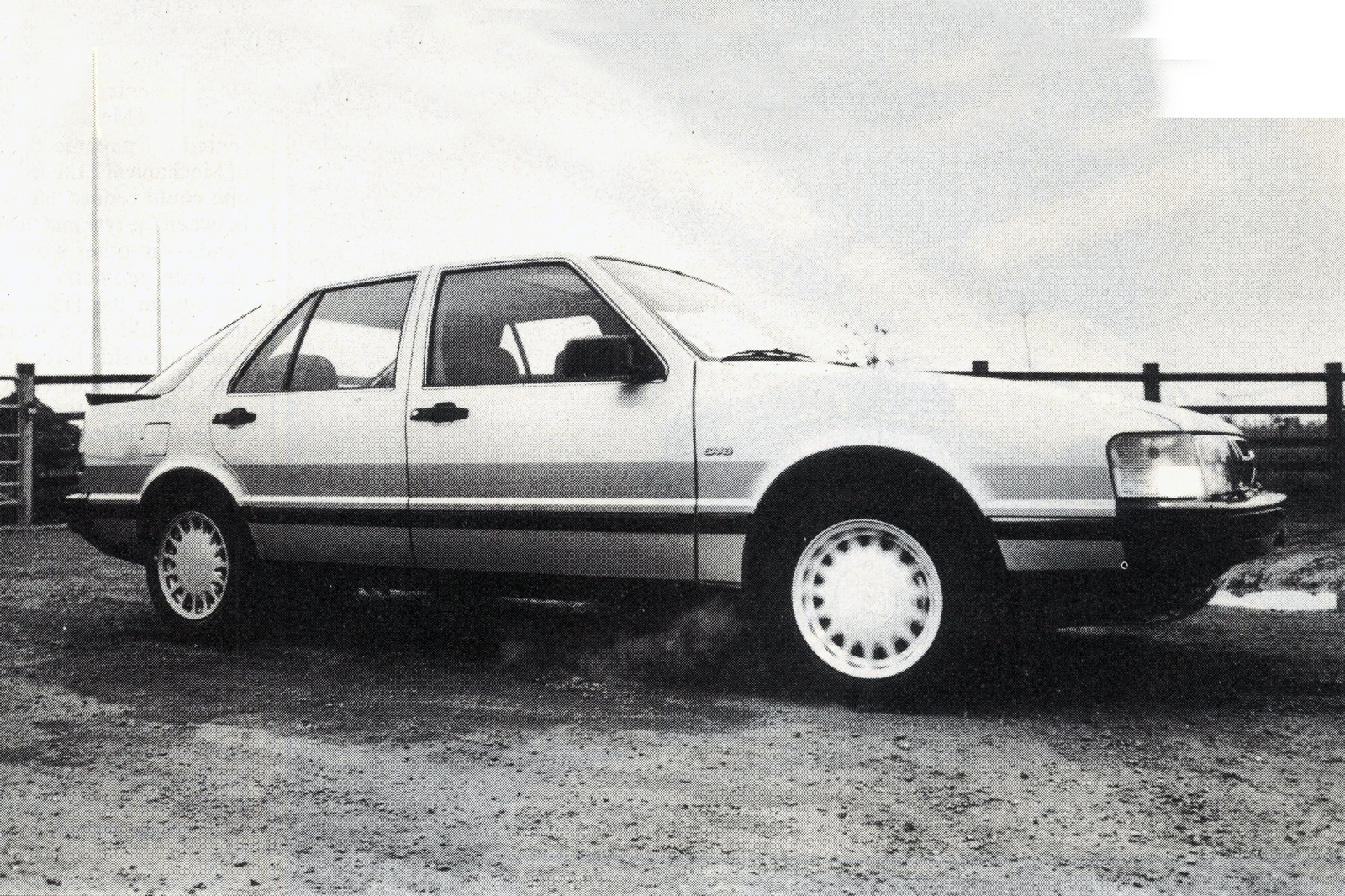 However, the Saab was a step away mechanically. As expected, it had better passive safety and Saab engines rather than rebadged Fiat and Alfa Romeo units but, more notably, it didn't use the others' independent MacPherson strut suspension set-up.

On our first acquaintance with the 9000 back in 7 November 1984, Autocar sat down with Saab's suspension expert, Magnus Roland, to find out how the car's innovative set-up could "prove that it is possible to have the best of both worlds: excellent stability and the progressive handling that appears to go hand-in-hand with a front-wheel-drive car".

Roland described the set-up of the 9000 as having a "side force oversteer" geometry and said that he could only have adopted it due to the "favourable dynamic index" of the car – its transverse engine layout, long wheelbase and minimal overhangs, with the powertrain and passenger area more within the wheelbase.

Autocar explained: "For Saab, handling has to be first-class on Tarmac but also provide the average driver with ease of control on the thousands of miles of gravel road in Sweden. Few must reach the limit on Tarmac, but almost all drivers must experience the car sliding at some time or another on gravel, and they certainly do on the snow and ice that grips Swedish roads for at least four months of the year.

"Roland says that one can have the unpleasant situation where initially good response soon turns to understeer, quickly followed by a nervous rear-end breakaway. Even the skilled driver may find certain front-wheel-drive cars difficult to balance in this situation. In a sense, one momentarily loses control of both ends of the car, while the car itself may be in an overall state of oversteer or understeer." 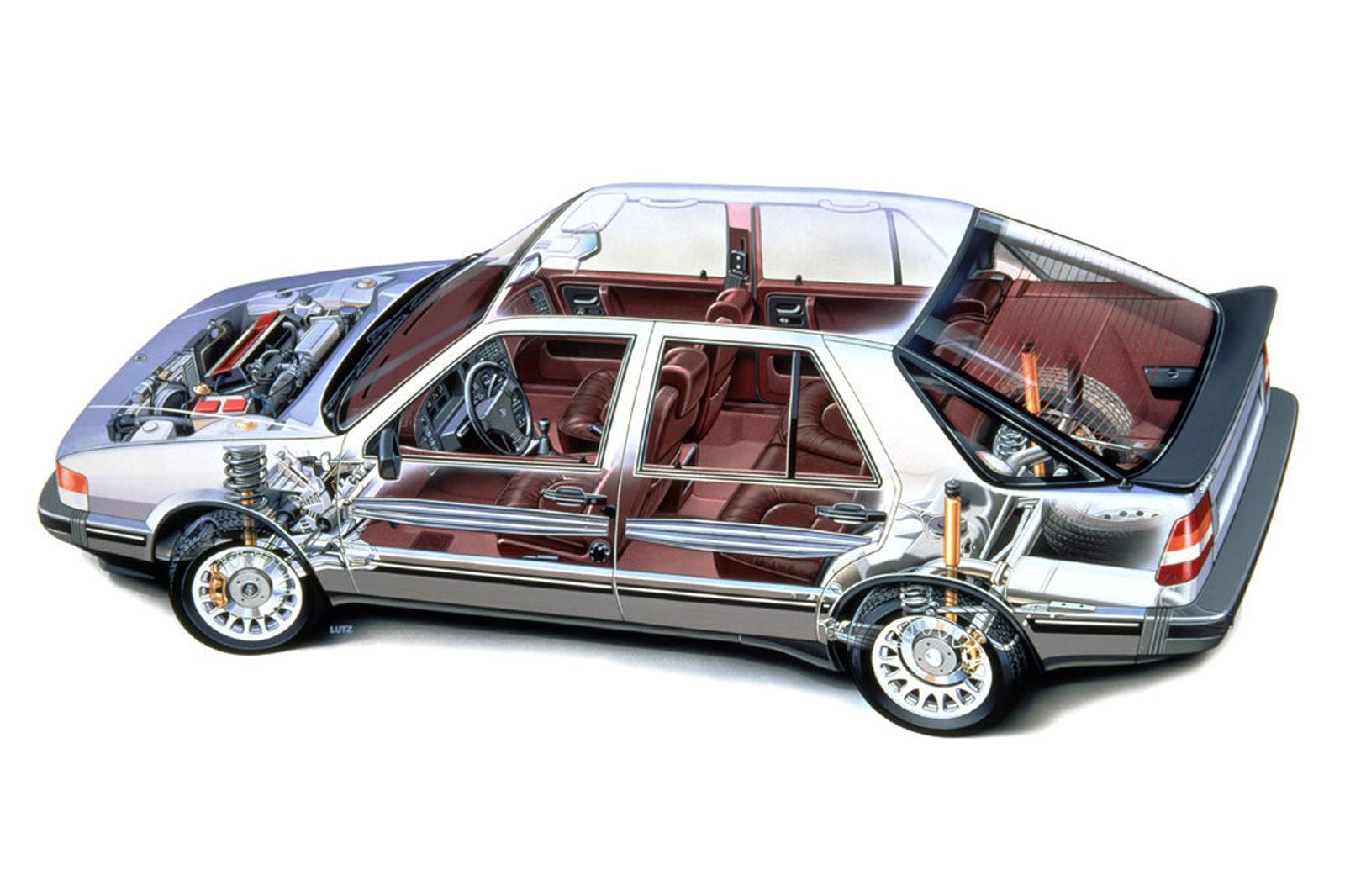 Roland, who was both "a theoretical and practical engineer and a top-class test driver", therefore recognised that what was needed was a system that would 'damp out' the small disturbances to enable the driver to control the car easily at the point of breakaway.

Drawing from rallying knowledge and mathematical modelling, he realised that "if one could reduce the slip angle between the tyre and the road in a bend – in other words, arrange the axle geometry to generate toe-out on the laden wheel, rather than toe-in (which many did at the time) – there would be a much softer build-up of a side force at the tyre, leading to a much easier car to drive on the limit. The total grip would be the same, but approached in a much more gentle way."

The difficulty was that "to 'buck the trend' and steer the axle in the same direction as the curve taken by the car also increases the attitude angle of the car, plus its response time to steering inputs, producing a reduction in stability". Clearly, "to overdo the rear axle steer effect would be absolute folly".

So, it was important to control the degree of axle steer accurately. Fortunately for Saab, then, it had "the most fundamentally locative and rugged rear suspension system around". 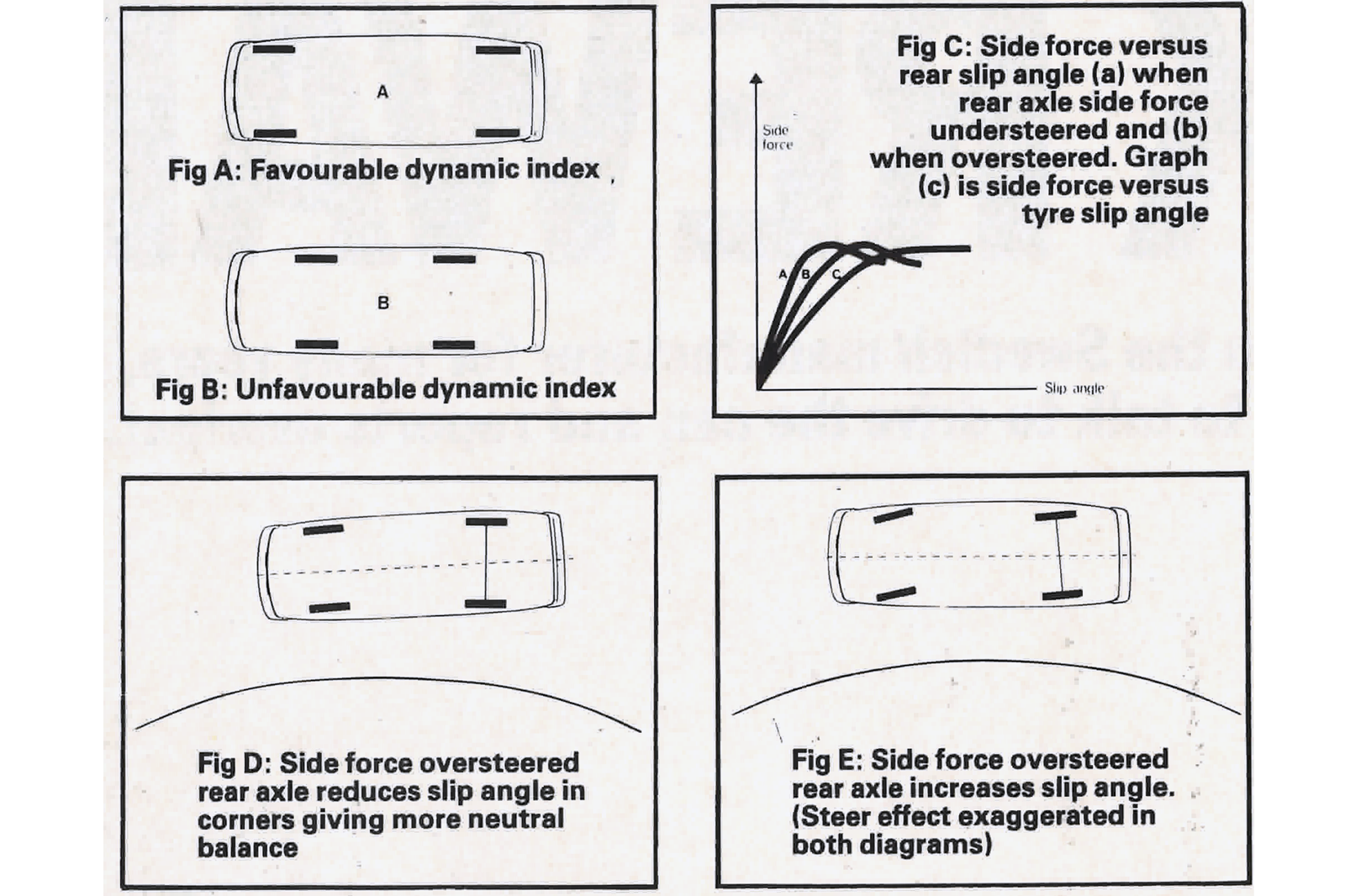 This comprised a very stiff beam axle located longitudinally via lower trailing links (supporting the springs) and upper leading links; Watts linkages viewed from the side. Lateral location was via a Panhard rod. Roll centres front and rear were lower than those on the smaller Saab 900 (benefiting overall stability), requiring anti-roll bars to be fitted at both ends of the car. The set-up was completed by gas dampers all round.

"It is in the careful tuning of the trailing and leading link pick-up points that the small steer effect is brought in", we explained.

"In Roland's experience, it is when there is very little grip, as on gravel, snow and ice, that small changes in axle steer have a large effect on handling. Conversely, changes in spring and anti-roll bar rate are the major influences on Tarmac handling.

"Side force oversteer reduces the tendency of the car to understeer in bends, while the softer rear-end breakaway characteristics effectively mean that any loss of adhesion shouldn't occur on any surface at a rate faster than that at which the driver is capable of taking the appropriate corrective action."

This set-up, we concluded, made the 9000 the first Saab "to use 20 years' worth of suspension development all at once". 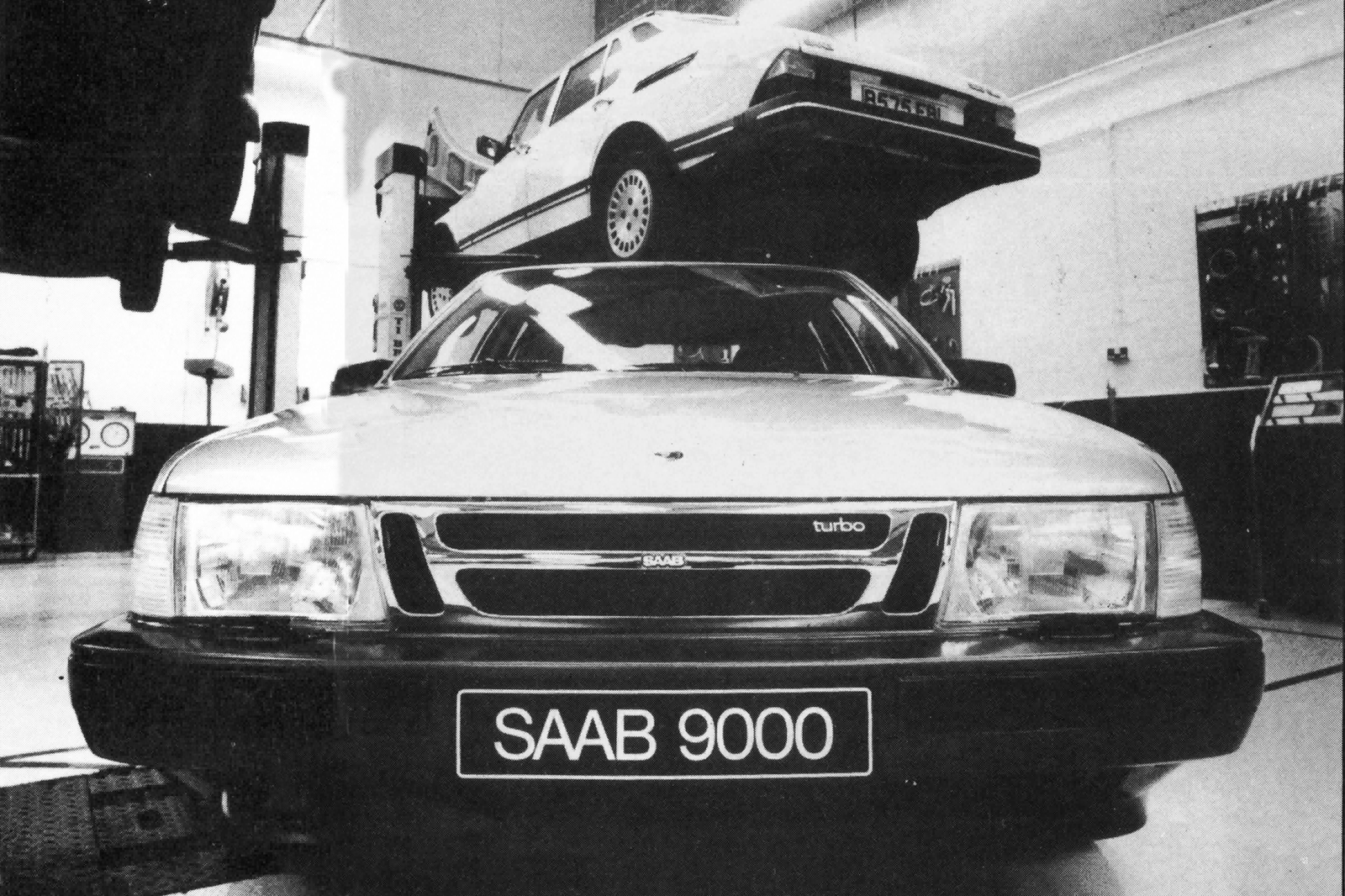 To find out whether Roland's engineering had tangible outcomes, we took one of the first production 9000s out on the road. We found that the car "soaked up medium-to-long pitch undulations beautifully, without float, giving a secure but comfortable ride".

"Where possible, we tried to use the full cornering power. What transpired was wonderfully gentle and progressive handling. The car took mid-corner bumps without deviating from the line. There was some understeer but a good degree of steering feel as the cornering forces built, although mid-corner ridges created a bit too much kickback.

"But it was on gravel roads that the 9000 came into its own. Roland took the wheel. He would apply power as we were sliding. There was some understeer. Wheelspin came and went, although less than might be expected, but the front stayed on-line with no nasty outward movement.

"More often, he provoked the car into a slide by braking into a bend and swinging the car as a rally driver would. The breakaway was gentle and forgiving, the correction fluid and easy. Meanwhile, the car did not stray much from the intended track and seemed to be using the grip almost equally front and rear. For the uninitiated, the speeds the 9000 was able to attain on these loose surfaces were extraordinary."

In conclusion, then, we found that the 9000 "simply seemed like one of the nicest front-wheel-drive cars to date and easily the most refined and best-handling Saab".

I recently attended a talk by a Lancia development engineer who oversaw the Thema and talked about the Saab team’s intransigence regarding their beam-axle rear which was unacceptable to Lancia who could not compromise on fully independent suspension as even the small Delta and outgoing Beta had independent rears that look like that of the Mk1 Focus. Having to cater for both, delayed the overall project. What could be read here is that Saab were quite conservative and went with what they knew from the 99/900.

Fiat didn't buy Alfa Romeo until 1986, and the Alfa Romeo 164 was launched in 1987, so the vast majority of the Type Four project was carried out while Alfa was still independent - that's why the Saab 9000, Fiat Croma and Lancia Thema look broadly similar, while the 164 doesn't - Alfa chose to use only a modified version of the chassis, and designed it's own bespoke bodywork and front suspension.

I too am waiting for an in-depth report and test of the new Citroen suspension, planned to be rolled out on other models after the new Cactus, with baited breath. But I fear it won't come.

Of course if it were a JLR product...