BACK TO ALL OPINION BLOGS
Currently reading: What's not to like about the next Mazda 6?
UP NEXT
Racing lines: Slow start but greatness ahead for Le Mans hypercars

Made a whistle-stop trip to a snowy Frankfurt today for a close-up look at the Mazda Takeri concept. The Takeri, which was unveiled at the Tokyo motor show late last year and will be shown to the European audience at Geneva next month, is a midsize saloon concept that precedes the next Mazda 6.
Share
Close
Share story

Made a whistle-stop trip to a snowy Frankfurt today for a close-up look at the Mazda Takeri concept. The Takeri, which was unveiled at the Tokyo motor show late last year and will be shown to the European audience at Geneva next month, is a midsize saloon concept that precedes the next Mazda 6.

I appreciate that this is one of those irritating 'you had to be there' moments, but the Takeri looks more stunning in the metal than it does in photographs. If you're plotting a trip to the Geneva motor show, it's worth seeking out this saloon and poking around it. To me it looks solid, fairly sporty and well-proportioned. What's that old saying about if it looks right, it'll go right?

Taking its cues from Mazda's latest Kodo - Soul of Motion design language, the Takeri isn't far removed from the production 6 in terms of external styling. According to Mazda Europe's chief of design, Peter Birtwhistle, about 80 per cent of the Takeri will be carried over onto the next 6, which is expected in 2013.

In fact, when a pre-production 6 was recently wheeled into Mazda's European design studio at Oberursel, near Frankfurt, Birtwhistle admits he thought it was the Takeri at first glance!

Some elements of the Takeri's shape are influenced by Mazda's efficient SkyActiv technology, the umbrella term that covers modular platforms, efficient transmissions and engines, lightweight bodies and chassis.

For example, the shape and angle of the exhaust manifold on the SkyActiv petrol engine has necessitated the Takeri's front cockpit being pushed back, contributing to the car's sweeping nose profile and windscreen angle.

The Takeri's minimalist interior won't make it through to production in its entirety, although expect to see some elements filter down. As a whole, though, the interior informs what is likely to be seen on the next generation 6 after the one Mazda is currently finalising. Stylised concept elements such as the wing mirrors and pop-out door handles will also disappear on the next 6.

As striking as the Takeri is, what's going to be under its bonnet is equally as significant. It's the first car to get Mazda's i-Eloop regenerative braking system.

Mazda claims the system, which stores kinetic energy and uses it to feed the lights, aircon, audio and so on, is a world first in a passenger car because it stores the power in a capacitor. Mazda's research suggests the fast charge and discharge capabilities of the capacitor make it preferable to storing energy in batteries. If the car is decelerating from 60kph, it could take as little as 7 seconds to fully charge the capacitor, which can then power the car's main electric functions for up to 80 seconds when the vehicle is at a standstill and in stop-start mode.

In situations where the car is regularly accelerating and decelerating (when energy is fed to the capacitor) Mazda predicts it could cut fuel consumption by as much as ten per cent particularly if,  like the Takeri, power comes from  Mazda's 2.2-litre SkyActive-D oilburner and latest six-speed automatic transmission.

So if the Takeri is any guide, the next Mazda 6 will look the part and offer exceptional fuel economy. The third part of Mazda's three-pronged strategy is ensuring it drives well. If the manufacturer can get that bit right, what's not to like? 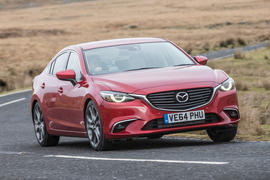