BACK TO ALL NEWS
Currently reading: Aston Martin DBS Superleggera gets Bond-inspired special edition
UP NEXT
Motoring heroes: the most inspiring people in the car industry

Hot on the heels of the Goldfinger DB5, Aston Martin has released a more modern James Bond special called the ‘On Her Majesty’s Secret Service’ DBS Superleggera.

Marking the 50th anniversary of the film of the same name, the special edition gets an olive green paint scheme inspired by the 1969 DBS that features in it. Owners also receive a bespoke car cover in the same hue

As well as the unique paint, the Superleggera is adorned with a carbonfibre splitter, aero blade and unique diamond-turned and forged wheels. The front-end design is unique to the special DBS, with a new six horizontal vane front grille aiming to provide a visual link to the original Bond DBS. 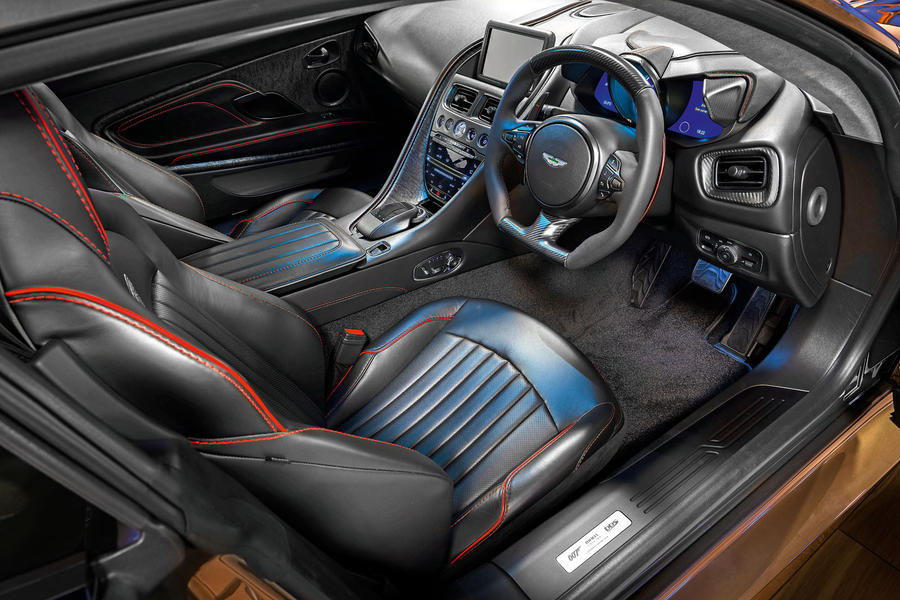 Its interior is trimmed in black leather and grey Alcantara, with red accents including red felt lining in the glovebox - a nod to the film car's glovebox which holds a telescopic-sight rifle. A felt-lined drinks case for the boot, with space for two bottles of champagne, is an option.

The performance of the regular DBS Superleggera is unchanged. The 5.2-litre V12 makes 715bhp, translating to a 0-62mph time of 3.4sec and a top speed of 211mph. The car is detailed in an official Aston Youtube video, below:

Aston Martin Vice President & Chief Creative Officer Marek Reichman said: “Creating a James Bond special edition is always an exciting challenge as we work to create a car that embodies the legend of James Bond, and the original movie car. The DBS Superleggera is a muscular car that commands attention, but the Olive Green gives it a subtlety that belies the beast beneath.”

A total of 50 examples of the On Her Majesty’s Secret Service DBS will be built, retailing at £300,007 – just over £75,000 more than the standard car. First customer deliveries will start at the end of the year.

It's not 100% but Aston have an outstanding track record for making good looking cars.  I would be uninterested in the bond angle.

The interior shapes and lines, plus where they can't even put the air vents on straight, is terrible too.   So many unconnected details.   It's as if three or four designers were arguing about what they wanted!   The DB11 suffers from this, but they made it worse with the DBS.

Agree 100%. What's going on in their heads when they make that grille THAT big?

Great design relies on an understanding of proportion. In no way is the grille in proportion with anything else on that car. It's completely ridiculous.

Just noticed, it's not even the right colour!

New DBS looks like it has faded in the sun.

You'll be able to flip it for the same amount of profit. That's what it's really all about.

The interior shapes and lines, plus where they can't even put the air vents on straight, is terrible too.   So many unconnected details.   It's as if three or four designers were arguing about what they wanted!   The DB11 suffers from this, but they made it worse with the DBS.

Exactly. I also dislike the "roof strakes" that just break up the lines and make the A-posts look broken at the base. The previous generation cars were true works of motoring art, with no styling gimmicks -- just clean lines, perfect proportions and superb attention to detail, which is why they've aged extraordinarily well.

On a positive note, at least the side vents get their strake back, and the Aston wings return to the rear (rather than the lettering).

22 May 2019
Great car, but an additional 33% for a few carbon fibre pieces and a different colour is ridiculous. Charging extra for the drinks case, OVER AND ABOVE the 33%, is really taking the piss!

Yes, yes it is, nice to see a connection to something that still stand the test of time, as for the car, we’ll, I’m not a fan of the red accents inside, just looks wrong, no doubt if your buying you can change that, bu5 overall it’s a nice car.....