BACK TO ALL NEWS
Currently reading: Renault Fluence on sale 2011
UP NEXT
Nissan will build batteries in UK to sustain Sunderland plant

These are the first pictures of the production version of the electric Renault Fluence saloon, which will be sold in the UK from 2011.

The car, which is based on the Megane saloon, has a theoretical range of 99 miles, a top speed of 84mph and 167lb ft of torque.

It will be joined in Renault's electric line-up by an electric Kangoo van, which will go on sale in the first half of 2011.

It has the same capacity as the standard Kangoo, a theoretical range of 99 miles, top speed of 81mph and 167lb ft of torque.

Potential customers can place expressions of interest with Renault now, in order to get priority when the cars become available. Renault is planning to lease both vehicles, but it isn't clear yet whether it will offer them for sale as well.

Follow us on FacebookSee all the latest Renault reviews, news and video 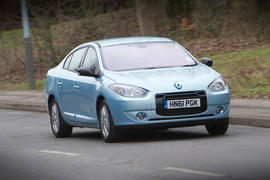 Thought ye might want to know its on sall in Ireland now with 1.5 diesel 86hp and 106 hp engines and there is a 1.6 petrol put petrol does not sell great over here it ain.t bad looking inoffensive nothing too new or special in the looks it has a Megane dash inside its basically just a Megane saloon and I would not buy 1 myself its built in Turkey and thats just a country I don,t think is exactly renowned for car making also I think the Grand Megane is a beaut myself thats the 1 I would buy. The electric 1 looks nicer but I think electric cars are just a stop cap myself never gona be great they just move the pollution to the factories producing the electricity.

Such a pity it has those awful buttresses running up the bonnet to the "A" pillars , they spoil the look of it.