BACK TO ALL NEWS
Currently reading: Peugeot 5008 prices announced
UP NEXT
New BMW M3 Touring due in 2022 to rival Audi RS4 Avant

It has three trim levels (Active, Sport and Exclusive) and all models come with Peugeot's Multiflex interior, which has seven seats, the second row of which folds flat and the third row can be hidden below the floor.

Sport models get 17-inch alloys as standard, as well as an Aluminium Pack (which features new trim for the front grille, front fog lights and chrome detailing), cruise control and front fog lights.

Prices rise to £23,695 for the top-spec Exclusive model with the 163bhp 2.0-litre turbodiesel engine. 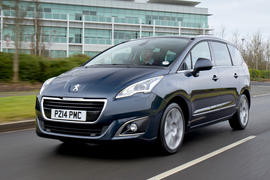 The Peugeot 5008 is a step forward for the brand, but it is not enough to transform the MPV market