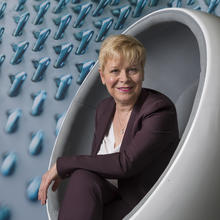 Autocar editor Mark Tisshaw explains why the Citroen CEO topped our Great British Women in the Car Industry list and was named the most influential British woman in automotive:

"Before Linda Jackson took charge of the famous French brand four years ago it was drifting in mediocrity, lacking the creative spark and flair for which its entire reputation was founded, with a so-so range of decent but uninspiring cars.

"The Citroen of today is very different indeed. Less important than the fact cars such as the C3 Aircross and Cactus are better than Citroens immediately before them is that they are different and interesting, likeable in their own ways, with real reasons to buy them.

"That Citroën of 2018 is so different is no surprise under Jackson's leadership. The brand she has created is one with consistency at its core, ensuring that everything from the colour choices of its cars to the fonts on the marketing literature are unmistakably Citroen.

"There is no muddled DS sub-brand to build into the Citroen range, nor a desire to cover every single part of the market and offer huge discounts just to get volume. In such a homogenised mainstream market, Citroen is once again a breath of fresh air and, for that, Jackson must take much credit."