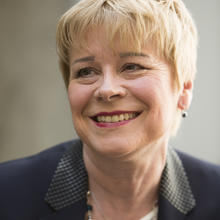 Coventry-born Linda Jackson wears her role as chief executive of Citroën, the 97-year-old car brand that’s as French as the Eiffel Tower, with impressive lightness.

This is quite a feat, given that even after a frenetic two years overhauling Citroën’s image and products, Jackson continues to be mobbed by media types still getting used to her elevation, keen to grab a photo and pose the same daft question: what’s it like to be a woman running a car company?

Behind this unanswerable enquiry lies a pair of widely held and wholly incorrect assumptions. The first is that there must be more to the appointment of a British woman to the top job at Citroën than a mere record of consistent high achievement; the second that no right-thinking woman could possibly want to run something as redolent of grease-pits and grimy overalls as a car company.

Luckily those who know the modern industry no longer think this way. In truth, it is because both assumptions are so breathtakingly incorrect that Autocar takes pleasure in citing Jackson as its most influential British woman of 2016 in the global motor industry. If ever an important job were awarded to a candidate on merit and nothing else, this is it.

Jackson, small and stylishly dressed (“I love my clothes”) speaks with crispness and clarity on the subject of awards, as she does on everything else: “I’m all for women winning things,” she says, “if they help focus women on the opportunities of our industry, and encourage them to try our industry themselves.

“But I’m very wary of token awards. If I were offered a job because of some quota, knowing there were better male applicants, I wouldn’t want it. Carlos Tavares [Chairman of the PSA Group] didn’t offer me this role because I’m a woman. He offered it because I did well in the UK.”

Like many of motoring’s high achievers, Jackson never set out to be a car company boss. Educated at a girls’ grammar school in the Midlands, she won a university place (“I was going to be an English or History teacher — I don’t know why”) but decided on the spur of the moment to stay in a holiday job she’d taken at Jaguar, which was then owned by Rover.

“It was supposed to last two months,” she says, “but I was taken by the bug of cars, and by the idea that we were making products people cared so much about.” Jackson enjoyed her “very simple” work, and soon began to progress, moving departments and taking on more demanding roles. Seeing her potential, Rover sponsored her through an MBA at Warwick University.

“If I experienced any discrimination against women in those days, it was probably positive,” she says. “There weren’t many women moving through the ranks so you tended to be noticed — though it’s probably not very politically correct to say so.”

That early experience leads Jackson to scorn the idea of quota systems to this day.

“It shouldn’t be about that,” she insists. “A woman should have the same opportunity as a man to prove her abilities. The real challenge is to encourage more women to want to join our industry because if they do we’ll naturally have a bigger pool of female talent.”

By the time she finished the MBA, Jackson was 28 and thoroughly ambitious. She had the support of a mentor, a male finance director progressing in his own career, and of a recently acquired husband, another Rover employee.

Mentors are vital, she now says. With this support she worked in lots of roles — product development, finance, pricing, then back in the factory to do plant finance (“I didn’t like the workwear”). She succeeded everywhere, but expertise at finance was the skill most prominent on her record, along with ambition and a willingness to travel.

She moved to France as Rover’s finance director, supported by her husband (who worked for her) and her two stepchildren. Then two more things happened: BMW bought Rover and Jackson was appointed Rover’s MD in France, selling 15,000 to 20,000 cars a year. Again, the support of her family was vital: “It’s an advantage I’ve enjoyed that many women lack,” she says. “My husband was my supporter, but many women don’t have that advantage — and helping them cope with work and family life together is still something our industry doesn’t do well enough.”

Late in 2004, a head-hunter called on behalf of Citroën UK. Jackson, knowing the parlous state of Rover’s finances, realised it was time to go. “I’d been there 25 years,” she says, “and they’d given me all my opportunities, but I knew Rover’s collapse was a ‘when’ not an ‘if’. I left in January 2005, and in April the whole thing imploded.”

From 2005 to 2009 Linda Jackson served with distinction as finance director at Citroën UK, then the MD left the company in 2010 and she was the natural choice to supplant him. She set out on a journey to move the company and its dealers from their position as “cashback kings”, to rebuild brand loyalty and improve residual values by moving to monthly rentals, re-educating dealers and building customer satisfaction and the after-sales business.

“We had to convince France that even if we couldn’t deliver the same volume growth, the operation would be more profitable,” she says. Across Europe, Citroën is still on that journey.

Then came the ‘Carlos Moment’. High-flying Carlos Tavares had joined PSA as group chairman at the beginning of 2014, and soon came to the UK to see how things were running. He and Linda Jackson had never met before then, but from that time on he rang regularly for updates from Citroën’s third biggest market. In April Jackson was invited to Tavares’ office in Paris via a mysterious interview with the HR director, who enquired whether she “liked to travel”. Cripes, she thought, they’re going to send me to Russia.

With little preamble, Tavares offered Jackson the job as head of the whole Citroën brand. “I’m not normally lost for words,” she says, “but this was a bit different. It was a Friday; Carlos suggested I go home and consider it. I rang my husband, who reminded me we’d just had April Fool’s Day. But we talked it through, and then I rang Carlos back on the Sunday to accept.

How free was Jackson to change things? “We already had the Cactus,” she says, “in fact it was my first job, in my first week, to launch it. That was a very nice present, but we didn’t have much else. Our job became to come up with a whole product story; to decide what a Citroën really was. It was a team effort, of course, but I was determined it would be totally coherent. Coherent is a word I use a lot.”

The themes of class-leading seat and suspension comfort, of space and simplicity in future Citroëns — all part of a philosophy called Citroën Advanced Comfort — have come about on Jackson’s watch. She has so far shown a convincing Cactus prototype and a special suspension design that distinguishes it. A very different C3 supermini is coming, and there are a couple of SUVs heavily influenced by Cactus on the horizon.

Only now are we starting to realise the supreme importance of Cactus, destined under Jackson to be an icon in the future. Linda Jackson has had that idea for years, however. “We will use Cactus very much as we move forward,” she says, “but it will always retain the spirit it began with.”