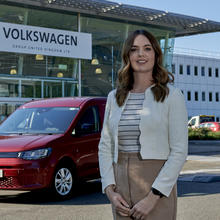 Hannah is one of the most prolific fleet sales managers at the brand, as well as the wider Volkswagen Group. She joined the group in 2011 as an area sales development manager for Volkswagen’s Trade Parts Specialists in Leicester and progressed to a head office role as key account manager just 18 months later. She moved to her current role in 2015 where she acts as a bridge between van fleet customers and the Volkswagen Commercial Vehicles brand, matching customer requirements with products and services. Covering her area from the Midlands to just north of London, she works with larger fleets with tremendous success.

In 2018, Hannah was responsible for nearly 2200 sales, making her the second-most-successful area fleet manager by volume in the whole Volkswagen Group UK. Last year, Hannah’s area was the only one to hit its overall sales target, despite the pandemic. Among her successes this year is striking a partnership with Halfords, which will take 160 Crafter large vans by the end of 2021. Hannah also had responsibility for launching the Volkswagen Group’s graduate field force programme, which was set up to give all those on the graduate scheme at least a week in the field learning about a direct sales role. Tracey Perry, national sales manager for Volkswagen Commercial Vehicles, was full of praise for Hannah in her nomination: “Her ability to combine high sales and a sharp commercial mind with a genuine care and concern for customers is outstanding.”