BACK TO ALL OPINION BLOGS
Currently reading: My Skoda Superb was a zeitgeist new car purchase
UP NEXT
Opinion: Is hydrogen overhyped? It depends

My Skoda Superb was a zeitgeist new car purchase

On the day the government announced its 2030 ban on petrol and diesel cars, one man arrives home with his new plug-in hybrid
Share
Close
Share story

While I’m rarely accused of being fashionable, a Karmic coincidence meant I took delivery of my new PHEV on the very day the government’s much-leaked plans to bring forward the ban on combustion engines were formally announced.

My spiffy Superb iV estate isn’t a manufacturer-supplied loaner, rather the first new car I’ve bought in my life – and one that was selected in large part on the distinctly unemotional basis of tax incentives. Until about a week before signing the order I had been planning to buy a three-year old diesel E-Class instead.

Then a Tesla-owning friend pointed out the number of inducements that already exist for the self-employed to go electric. I quickly discounted the possibility of a pure EV on the basis of regularly making long journeys at short notice. Next I learned that anything producing less than 50g/km is currently eligible for a 100-percent first-year tax write-down, but this is being phased out in March. It didn’t take long to create a shortlist of eligible wagons within budget, and barely longer to realise the Superb – which I’ve always liked in its regular forms – best fitted the bill.

The problem turned out to be finding one. Demand for PHEVs is high – likely due to the approaching deadline - and a six-month wait for factory orders meant choice was effectively limited to unassigned cars in the country. There were three, all in mid-grade SE-L spec with no options, with my choice limited to colour. I went for black.

All of this has given my first ever experience of paid-for new car smell, but has also led to the ironic situation of a pronounced PHEV skeptic having bought a PHEV. The Superb’s 30-odd miles of electric range will come in handy for local pottering, and boost economy on middle-distance journeys; it managed an impressive 72mpg on its 58 mile journey home. But I’m also fully aware of the downsides of hauling around the mass of two powertrains all the time you only need one.

But we’re heading towards what many will regard as an era of least bad choices, one where PHEV s become the only realistic option for a significant percentage of higher-mileage drivers. The scientific illiteracy of the government’s planned exemption for “hybrid cars and vans that can drive a significant distance with no carbon coming out of the tailpipe until 2035” is self-evident, it’s generally accepted that CO2 is a global issue. But this is a straw that I suspect many will be grasping, even without the financial incentives that made me an unwitting early-ish adopter.

My personal unpreparedness for the future is proven by the fact I haven’t got a charging port yet, so the iV’s first charge came courtesy of this stylish extension cord. 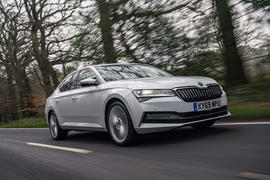 Skoda ushers in hybrid technology with its most emblematic model

Log in or register to post comments
Rugbyref 19 November 2020
I've had the same car as you since March and still don't have a proper charger - mine works just fine off the extension lead.

I've been really pleased with it, but challenge you to get 30 miles in e-mode on real roads.

Ironic choice for a zeitgeist

This is a product from the parent company that was responsible for the news yesterday regarding the ICE ban in the UK thats the nearest your going to get to a zeitgeist.