From £25,0106
The fifth-generation Subaru Impreza is much improved from top to bottom, but a poor engine and gearbox keep it trailing in this competitive class
Open gallery
Close

Subaru reckons that, in some ways, it's a victim of its own success.

After tearing up the World Rally Championship with Colin McRae in the 1990s, many onlookers today still associate the brand with those hair-raising. blue-bodied, gold-wheeled exploits, so much so that the manufacturer says it’s suffering from a “rally hangover”. And it’s going to take more than a strong coffee and a bacon sandwich to shake this one.

Subaru says this association gives people skewed expectations of its new products. Its cars are still 'fun', but it would rather that potential customers associated the brand with the three pillars it now builds itself upon: capability, safety and resilience. Are you still awake? Good, because there’s reason enough to pay some attention to the new Subaru Impreza.

Although Subaru’s current portfolio is SUV-focused, the Impreza is its best known and most recognisable car, so rather than let it fizzle out into extinction, the brand has kept it on for a fifth-generation model. It’s built on the new Subaru Global Platform, which we first tested in an early drive of the XV and offers torsional rigidity gains of 70-100% over the outgoing Impreza.

The Impreza also gets an updated interior, a new engine and the promise of improved driving dynamics. 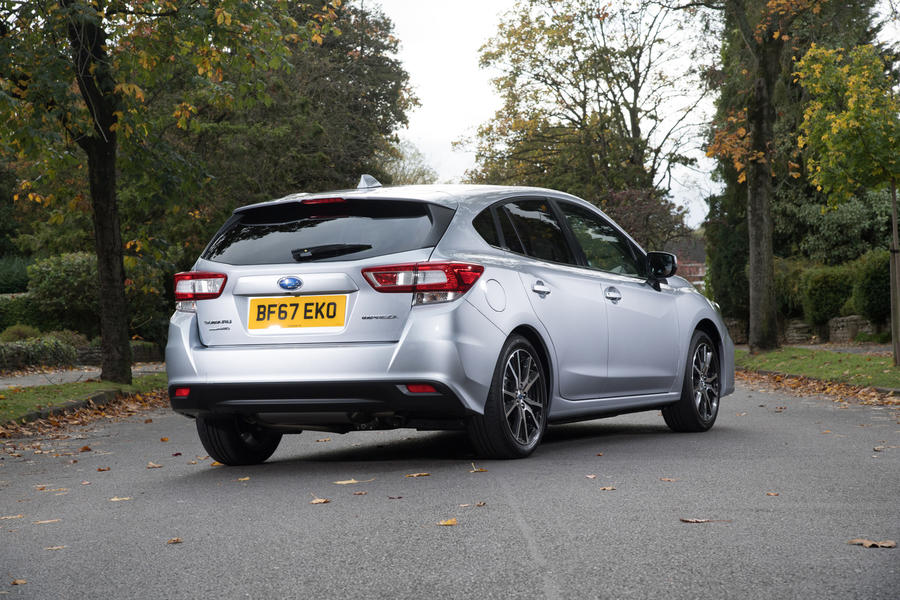 Hit an open stretch of road and it doesn’t take long to realise that the main negatives of the Impreza are its engine and gearbox. In this class, modern turbocharged powerplants are impressing with zippy performance and palatable running costs, but, in contrast, these Subaru units feel laboured, and their claimed fuel economy and CO2 emissions are poor. All of that means that, despite being new, they feel rather dated.

The 2.0-litre is certainly the one to go for, because it only costs £1000 more than the 1.6-litre and offers a noticeable amount of extra oomph, but it still doesn’t feel quick. Any kind of eager acceleration sends the CVT screeching through the rev band as it tries to haul the Impreza’s considerable weight along with only meagre torque reserves. It’ll still manage overtakes and get you up to motorway speeds, but you’ll find yourself regularly using the manual paddle shifters to avoid the whining auto. It’s quieter when you’re cruising, and refinement is generally acceptable, although there is a fair bit of wind noise at higher speeds.

Engine and transmission disappointments aside, the chassis is a clear step forward from the previous model. There’s plenty of grip on offer from the standard all-wheel drive system, and the steering has been tightened up on the straight ahead, so there isn’t the wayward feel of the old Impreza, which had more play around the centre. The new car feels a bit sharper into corners but will still understeer. It handles stably and predictably, but not as sweetly as the  Ford Focus, Skoda Octavia or Volkswagen Golf.

We have no complaints with the ride over the smooth Spanish Tarmac of our test route, but the few imperfections we encountered showed that it might be on the firm side when we get to drive it in the UK next year. Expect the Impreza to go further than anything else in the class off-road, though.

Despite having had a makeover, the new Impreza’s exterior styling remains familiar and bland. The inside, however, has had a bit more of a shake-up, with a typically robust feel throughout now matched with a bit more style and a better dashboard layout, making it a much more pleasant place to be.

Every model gets loads of kit in the one-and-only SE trim level, including an 8.0in infotainment touchscreen, a DAB radio, Bluetooth, a reversing camera and heated seats. There’s no sat-nav, not even as an option, but there is Apple CarPlay and Android Auto smartphone mirroring, so you can run a navigation app via your smartphone. The Impreza also gets Subaru’s Eyesight safety system and is expected to score highly in its upcoming Euro NCAP test after achieving the highest score to date in the Japanese equivalent.

The space on offer inside is decent, with plenty of room to get comfortable up front and very reasonable space in the back for tall adults on long journeys. The boot is on a par with the Golf's, but far smaller than the Octavia's. 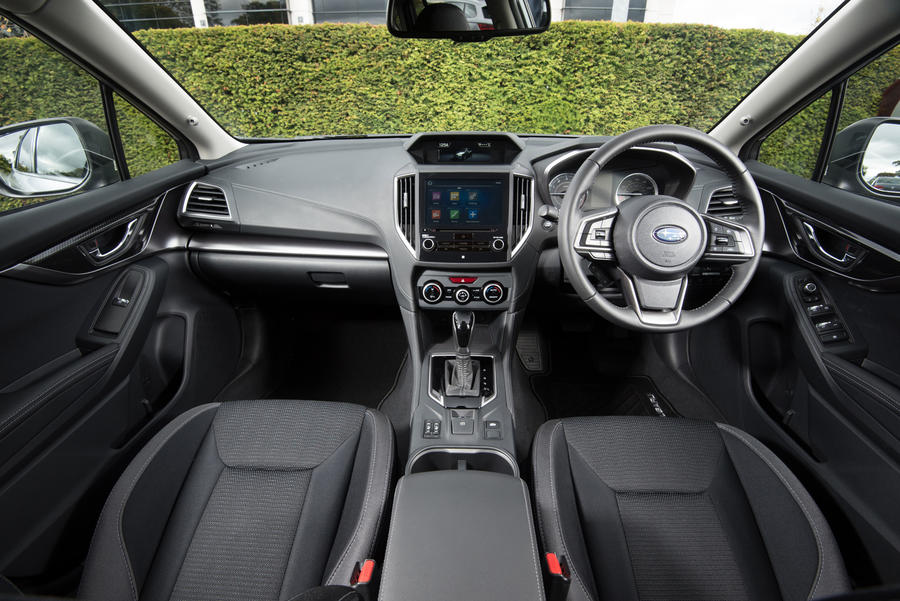 If you’re reading this review dressed in an oil-stained Colin McRae rally t-shirt having just serviced your fourth-generation Impreza on your farm, you’ll probably still be interested in this new model. It’s better to drive than the old one, has a nicer interior and comes with a hefty slug of equipment. It will also still go further off-road than its rivals and has a typically robust feel, and we expect it to be reliable, too.

Outside hardcore Subaru loyalist circles, though, there isn’t a great deal to entice new buyers aside from the off-road appeal. We don’t know what finance offers will be available yet, but high CO2 emissions mean it won’t be tempting for company car buyers, and its list price puts it in a very heady bracket; it’s the same money, even, as the petrol Skoda Octavia vRS and Golf 1.5 TSI.

The new Impreza is definitely better than its predecessor, but the goalposts in the class keep moving. An improved engine and gearbox offering is needed to make sure the Impreza isn’t left behind. 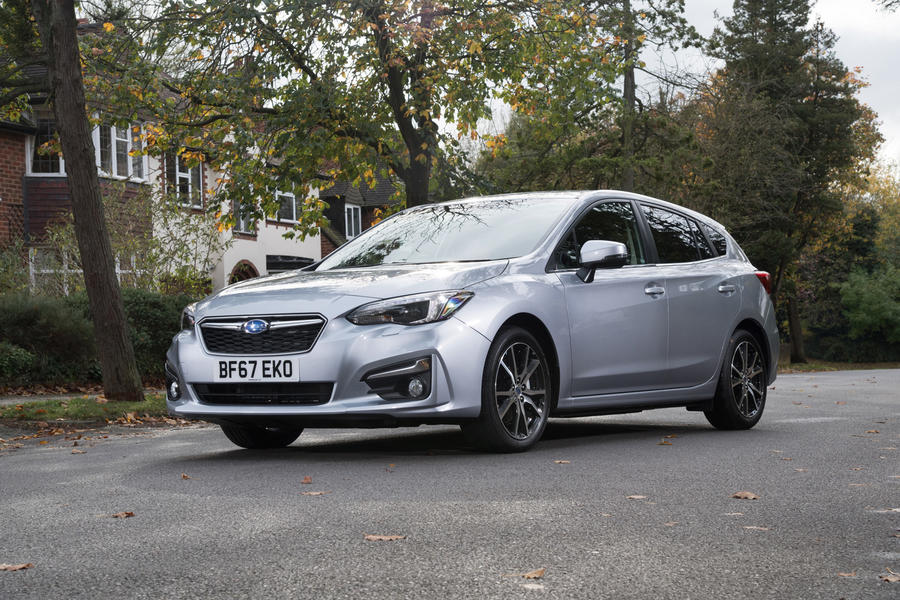 Its seems that International Motors (The UK Importers of Subaru) don’t want the Impreza to be a success. They seem to have lost faith in the car that was their bread and butter for over a decade. The very car that turned many of us on to the Subaru brand is no longer a viable option for much of the public.

Its my belief that IM’s have lost faith that they can shift Impreza’s and have as a consequence massively restricted the options – so as to restrict their financial exposure.  But here’s the rub….by not giving the consumer any choice in terms of engine, gearbox or trim they are sure to make the Impreza a flop. This attitude is also directly at odds with the current trend to offer buyers the ability to fully customise and bespoke their vehicle. This is backwards thinking on IM’s part and needs to change. People like to bespoke their car and the added extras generate added margins for IM.

This new Impreza is not really as reported an expensive car, it just comes compete with a high specification and AWD. In this article where they say the price is too high. They compare it against the Golf 1.5 TSI. Go on the VW configurator and see what a Golf 1.5 TSI DSG costs with the kit you get on the new Impreza and I can tell you the Golf is a lot more expensive –everything on the Golf is an extra  - even the 5 year warranty.

Meanwhile…. outside the UK Subaru sales are the highest they have ever been, if Subaru and IM want the same success here they need to offer some consumer choice. I’m not suggesting a custom configurator but at least a range of models and a range of trims and engine gearbox combinations. Elsewhere there are 4 trim levels and 2 body styles. We don’t even get the sport version.

Make no mistake Subaru make great cars, that are logical, well engineered, and have soul and an honesty lacking in much of the “blinged” up competition. I think many would be happy to wait a couple of months for the car of their choice to find its way across the world to the UK. So come on IM – give us the choice… until then I’ll continue loving my Levorg.

I think part of the problem is that the UK is a small market for Subaru, as their cars appear increasingly designed for the North American market - ie. Big, ugly, and with ponderous AUTO gearboxes.

Even going back some years, the decisions seemed odd - for example why have a Legcay 3.0 (great though it was) in the UK instead of the 2.0 turbo or later 2.5 turbo, that was available elsewhere?

Take the new Levorg, only available as a 1.6t cvt, yet in Aisa/ Australia NZ, they have a 2.0 turbo STi version - why do we not have that version here? ( it would probably result in double the current Levorrg sales!)

I have been a Subaru fan and buyer for many years, but will soon regrettably be buying something else, as the current range is just so dull!

A global car not designed for Europe

Subaru are doing very well with growing sales and high margins. However from a European perspective the cars really only make sense if you live in a mountainous area and you're going to take them off tarmac. For gravel roads few people really need lots of ground clearance (though I think the XV would be a nicer option for many).

After 20 years of Subaru ownership we switched this year. Engine / gearbox options were the key reason. I still have a soft spot for them though and would happily go back.