From £12,7508
Overhauled Clio opens Renault’s door to autonomous driving, but how good it is to drive yourself?
Open gallery
Close

Disregard the familiar visual cues: the fifth-generation Renault Clio is very much new, right down to its unseen – and never-before-seen – platform.

Every panel is new, and even though the window apertures are identical to the old Renault Clio, the windows themselves are new, too. The body-in-white is new and 22kg lighter than before; the subframes are most definitely new; the suspension is similar to before but very much new; and the engines are largely new. Headrests, gearstick, steering wheel? New.

This all-round newness is in contrast to the Clio’s in-house status as ‘grandmother’ car, as chief engineer Gilles Mulato puts it. That means it pioneers entire substems for the Renault and will donate them to other models, not least in the form of that modular CMF-B platform.

We’ll come back to that in a moment, but rarely is it far from the limelight. The latest incarnation of Europe’s best-selling small car (Volkswagen Polo second, Ford Fiesta third, though it’s a different story outside Europe) is physically smaller than before but more capacious – useful developments both. We’re told it is also ready for hybrid powertrains, hosts a class-leading array of driver-assistance systems, and we can surmise Renault’s primary aim is to finally plant the Clio into the vacant but narrow fissure between the Fiesta’s dynamic abilities and the refinement of the Polo, which would make it the Goldilocks supermini. All of this is intrinsically linked to the new platform, though Renault, by its own admission has also had ground to make up from the fourth-generation Clio in terms of both performance and interior finish, which aren’t so chassis-depedendent. It seems there’s plenty to talk about.

Unusually for Renault, exterior design isn’t such a big topic of conversation. It says the Clio is now sold mainly on its good looks, and as the previous car surpassed annual sales volumes every successive year since arriving in 2014, there’s been little appetite for design director Laurens van den Acker to shake things up. Because the Dutchman styled also the previous car – his very first Renault, since which he’s gone on to redefine the brand identity – peronsally he has very little to prove.

Neverthess, the new Clio has a larger grille than before (what, we're left wondering, doesn’t these days?) and the LED tusks from the Mégane. The bonnet now features a pair of pronounced contours and with a new bumper the whole demeanour is meaner, the car looking a little less surprised to be here. The windows surrounds are now chrome, while the rear is less heavy on the black plastic and achieves a neat minimalism by pressing the body panels in subtle, interesting ways rather than resorting to tacked-on trim. Sporty? Mature? A bit of both, to be honest. This particular example is painted Valencia Orange, and looks especially agreeable in the Portugese sun.

The engine line-up is relatively straightforward. The SCe 75 backstop is a naturally aspirated three-cylinder 1.0-litre petrol with 71bhp, though more popular will be the turbocharged TCe 100 version, which makes 99bhp and is the car we’re driving here. For now, the top-spec petrol is the TCe 130, which uses the same turbocharged 1.3-litre four-cylinder engine found right across Renault’s model range and benefits from direct fuel injection. It’s also the only Clio available with a seven-speed dual-clutch gearbox, and the only one capable of hitting 62mph from rest is less than 10 seconds.

Rest assured, quicker variants will follow, not least an effort Renault Sport, potentially with a detuned version of the 1.8-litre turbocharged four-cylinder engine from the Mégane. Diesel being less popular than in previous years, only one such engine is offered: an 84bhp 1.5-litre whose five-speed gearbox features taller gearing than the petrols for fuel economy nudging 90mpg at a steady cruise. There’s also a hybrid ‘E-Tech’ Clio due along in 2020 – it’ll pair a 1.6-litre petrol engine and a clutchless gearbox fitted with a pair of electric motors. In city driving, fuel consumption is said to be up almost half again compared to that of the petrol engine alone.

As for practicality, the Clio would seem to score well. At 391 litres, boot space tops even that of a Polo, which at 351 litres has so far been untouchable in the B-segment. The backrests of the front seats have also been slimmed down, winning a considerable 26mm of extra legroom for backseat passengers, and there’s more rear headroom in the Clio than in even a Jaguar XE, according to photographer Luc Lacey, who isn't especially short. 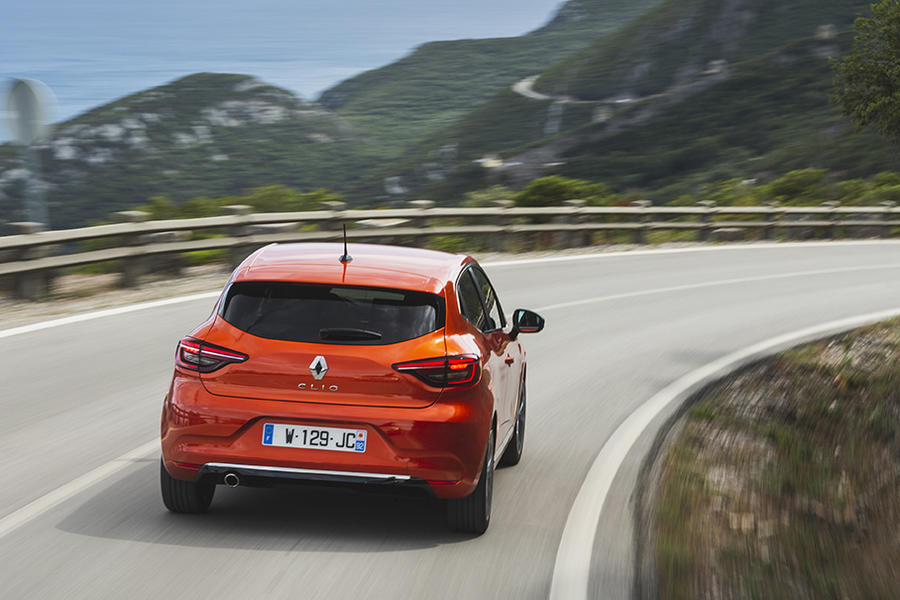 By far the greatest perceptible changes are reserved for the interior, where Renault has moved almost all the cheaper materials out of reach – and sight (and, indeed, mind). It’s a league ahead of the old car, so much softer to the touch in general, with hard plastics chased below the plain of the gearknob, which now rests high up on its own plinth.

There are some premium touches, too. The dash-wide strakes in which the vents sit are unashamedly Audi (and, come to think of it, the gearknob reeks of Audi R8), but Renault can colour the upper strake in, so it doesn’t feel too Germanic, and there’s a plethora of unusual colour and texture options for the expanse of trim below.

Then there’s the touchpoints, which are superb. Our test car’s leather-trimmed steering wheel feels as though it belongs, at the very least, the class above, and because Renault has repackaged the airbag, the view through its spokes and into the digital instrument binnacle is effortless. The window switches and toggleswitches beneath the tall 9.3in central display also depress with an expensive-feeling crispness, and Renault has resisted the infurating industry trend of moving the climate controls into the digital relam. Here they take the form of rotary dials, which use a fairly convincing knurled plastic chrome trim deployed elsewhere in the cabin.

If the cabin is nothing short of stellar, then the driving experience doesn’t quite hit the same heights, though it begins well enough. The steering column boasts all the adjustability you could ever want, and the seats can be set low enough for almost all tastes, even if the bolsters look more supportive than they really are. The steering action is fluid and the raised gearlever begs for positive inputs.

You’ll need to oblige it, too, because there’s a slightly gritty texture to shifts that, if not a chore, certainly doesn’t make changing gear any particular pleasure. The length of the throw is fine for a non-performance derivative but the movement itself also needs more definition. The clutch is then feather-light and matched by steering, which is also now a toucher quicker than before and with greater travel. In short, the control weights are very much set up for the low-speed ease and agility demanded by city driving, which is difficult to criticise in a supermini, if not quite what many of us are looking for.

The downsized 1.0-litre triple can also be filed under ‘adequate but uninspiring’, especially when Ford has shown that such engines can have both power and personality. Sometimes it’s as though Renault has geared this car for a land-speed record, such is the absence of torque at lower engine speeds, and yet straying above 5000rpm only loudens the monotone din. Equally, when not under any real load, few engines in this class are more discreet from the cabin, and at a cruise the TCe 100’s efforts are all but inaudible.

Dynamically the chassis by far is the most intruiging element of the new Clio. In the main, the suspension is impressively absorbant, and soaks up corrugated roads without much fuss. It’s prone to crashing over sharper inputs, but find me a supermini that doesn’t. In this class only the Volkswagen Polo does noticeably better, and most do considerably worse. Vertical body control is good, and lateral control more relaxed – too much so for our tastes but not in any way that might be described as 'flawed'. The Renault is also magnificently quiet at a cruise, and not just because of the engine. We’re told this is a particular area in which substantial sums of money have been spent, and it’s worked. Don’t be surprised if this car matches Golf-sized rivals when we affix our road-testing microphones later this year.

And when you really want to drive the thing? Once you’ve got on terms with the lack of steering feel and begin to push the car, it’s the low rolling-resistance tyres than give up first. The chassis balance is there, however, with you all the way, and so is another nice surprise: a mobile rear axle. You need to go looking for it in this regular Clio, and manage an ESP system you’ll swear gets triggered even when travelling in straight line, but the new car’s narrower hips (a change made principally for aerodynamic gains) make it playful. Only the Ford – or a Mini, driven extremely hard – feels this adjustable and so the upcoming RS Clio should be a blast. 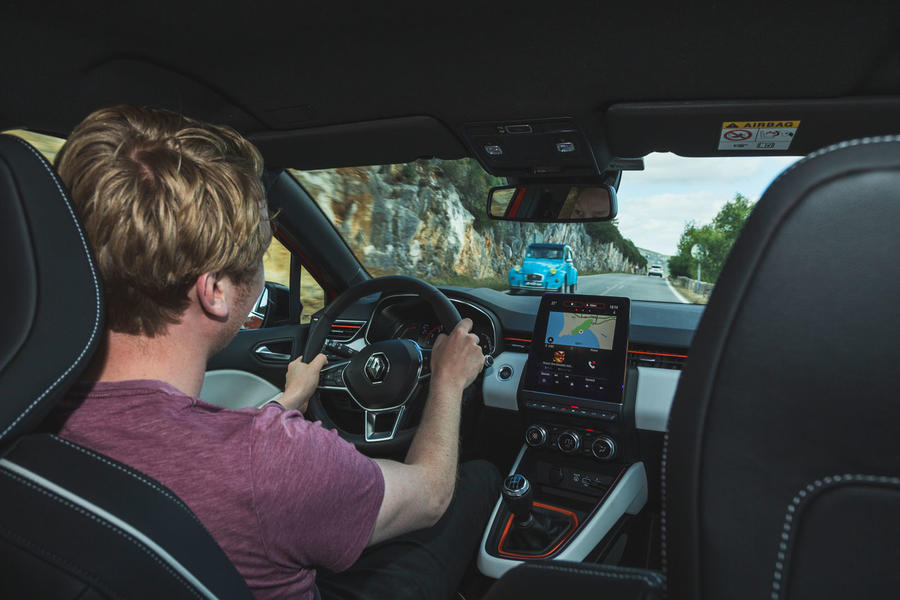 Though prices are yet to be confirmed, at around £17,000 for this mid-range Iconic model, you’d be mad not to consider it. This is an attractive little car with supple road manners and a strong, distinct interior. In fact many people would get more satisfaction from owning the Clio than they would the class-leading Ford Fiesta, and that’s because the French car’s character resides in its superficial charm and comfort, both of which are evident every time you go anywhere near it.

Autocar readers might feel differently. On its new platform the Clio feels far from devoid of dynamic appeal and there’s certainly potential here, but the Fiesta – somehow delicate and playful but assured, all at once – remains the more loveable device, at least once you’ve driven it.

Of the others, both the Volkswagen Polo and Seat’s Seat Ibiza steer accurately enough and cover ground well, but also feel lead-footed in a way the other the Fiesta and Clio don’t, and certainly don’t engender much affection. Meanwhile the Mini is expensive, and rides too firmly to be a great all-rounder.

Is, then, the very new fifth-generation Clio the Goldilocks supermini? Not quite, but with a more charimastic, forceful engine in its nose and more involving steering, it could be. It seems everything else is in place. 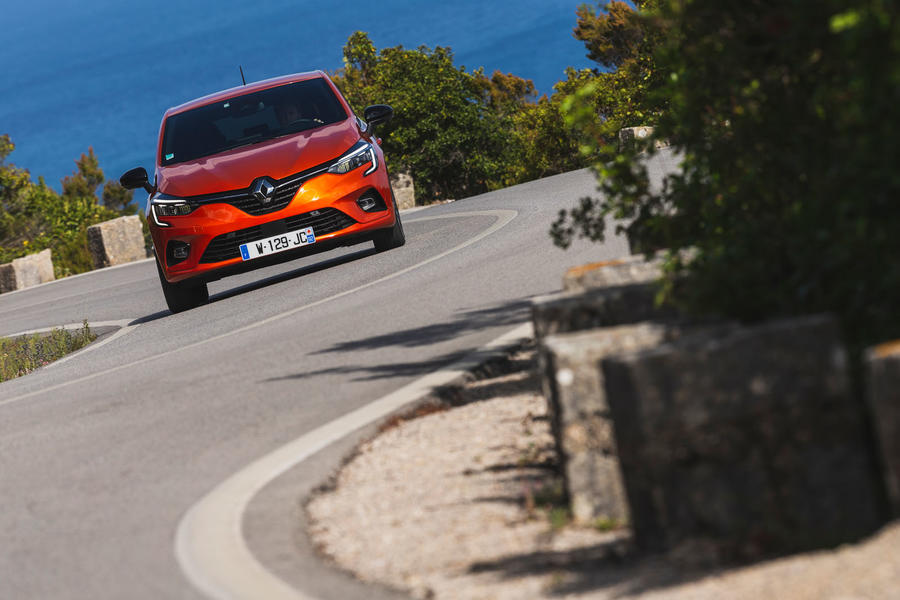 What is meant by this car opening Renault up to Automated Driving. There was no mention at all in the article
Thekrankis 21 June 2019

...you know - as practised by AUDI drivers:

I think that's what they are referring too.

It should be something special with this as a base.

So safe it's a risk?

Comes across as a very able car, carefully improved and matured, wrapped in a very attractive (if familiar) body.  The interior looks like a quality and calming environment, airy and soothing - some might find it a little dull, perhaps.

The controversy is just how incremental is the evolution of the exterior styling.  Will it remain fresh enough to maintain momentum in terms of presence and sales in the market beyond 24-30 months.  The new 208 looks a much more future-proofed design, although it's not as sexy.

That said, it would be on my test-drive list along with the Fiesta, Ibiza and new 208.