Mercedes has given its whole GLC compact SUV line-up a mid-life makeover in an effort to keep it competitive in an increasingly crowded market sector. The 220d is expected to be the big seller when it comes on stream later this year, so until then, the 300d is the diesel-engined entry point and effectively replaces both the old 250d and 350d.

You’ll be hard pressed to spot the changes from the outside, so subtle are the upgrades. However, look closely and you might pick out the slimmer LED headlamps, reprofiled grille and subtly tweaked tail-lights. There are also restyled bumpers front and rear. It’s very subtle, but it does just enough to mark this out as the newer car.

It’s inside where some of the biggest changes have been wrought, with the GLC finally getting the latest electronic architecture already seen on the A-Class. All models get the MBUX 10.3in infotainment touchscreen with ‘Hey Mercedes’ voice command and a large central touchpad, which looks sleeker but is less intuitive than the old Comand rotary dial.

Ahead of the driver are standard analogue dials that flank a 5.5in trip computer screen, while AMG Line Premium models and above get a fully configurable 12.3in digital dial pack. This can also be ordered as an option on lesser versions. Finally, there’s Mercedes' latest steering wheel, which feels great in your hands but is festooned with buttons.

The mechanical changes are modest, although the 300d gets a more powerful version of the OM654 2.0-litre four-cylinder diesel engine already used in the A-Class and E-Class. With 241bhp and a very useful 369lb ft of torque, it’s nearly as powerful as the old 350d but produces the same twist as the 250d. As with all GLC models, it now comes as standard with the firm’s 9G-Tronic+ nine-speed automatic gearbox.

Standard cars get coil springs and adaptive dampers, with AMG Line versions getting a subtly stiffer set-up. Optional, and fitted to all of our test cars, is the Air Body Control three-chamber air suspension. All of this has been seen before; what’s new is the stability control system, which is now calibrated for every on and off-road driving mode, whereas before you simply had a choice of having it on or off. 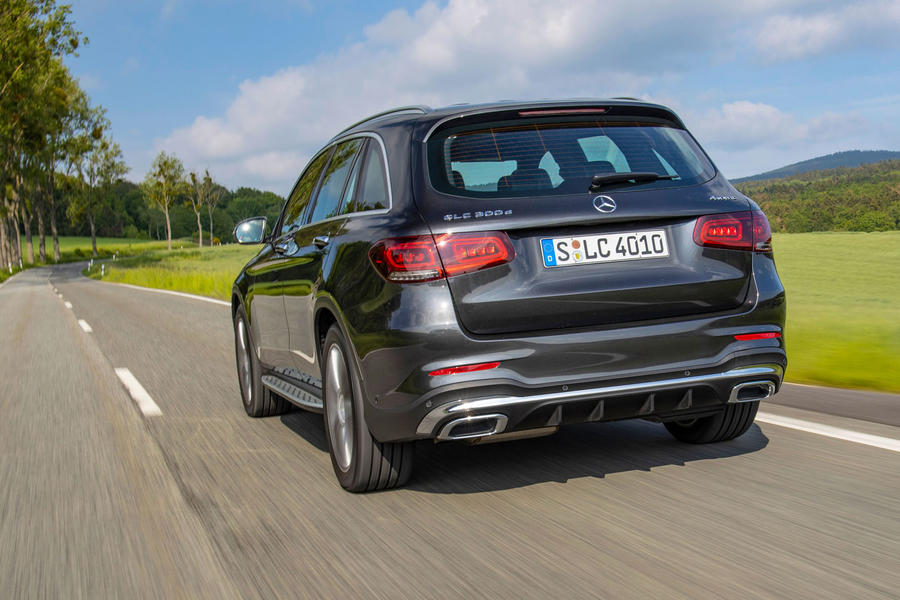 The GLC has never been the most dynamic member of the premium SUV pack, and nothing in this facelift has changed that. As a result, the lusty and refined 300d is probably the pick of the bunch, its easygoing nature being perfectly in tune with the rest of the car.

It’s quick enough, mind, dusting the 0-62mph sprint in a fairly lively 6.5sec. Hot hatches watch out. Yet it’s the effortless mid-range muscle that endears, wafting the GLC along at a fair old lick without ever feeling stressed, with the excellent noise insulation keeping the four-pot diesel to nothing more than a muted grumble when worked hard. You can make decently rapid cross-country progress without even trying.

As ever, the nine-speed gearbox is a mixed bag. It’s fine when left to its own devices in Comfort mode, shuffling ratios smoothly and responding nicely to little lifts of the throttle with a well-timed upshift. Yet ask it to get racy and it feels out of its depth, with Sport and Sport+ modes causing it to chop and change between gears with an occasionally directionless hyperactivity.

Either way, being driven with sports car gusto isn’t really the GLC’s thing. Sure, its steering is precise and there’s plenty of grip, plus the air suspension serves up commendable body control even in Comfort mode, but it’s not a car to be hustled. Instead, you need to back off a bit and revel in the supple ride and impressive refinement. Of all the upmarket compact SUVs, the GLC is arguably the most sybaritic, and that’s a good thing, given the type of use these cars are normally subjected to.

Talking of things compact SUVs are and aren’t normally subjected to, we got a chance to drive the GLC off road. With the air suspension raised by 50mm to deliver 245mm of ground clearance and Off Road+ mode selected (there’s also standard Off Road, but air suspended cars get the extra '+' setting), the car handled the muddy and fairly testing course with aplomb.

The traction control can effectively switch between sand, rock, snow and mud settings, and even on standard summer tyres, this electrickery allows the GLC to climb outrageously slippery inclines without giving the impression that it's ever going to get stuck. So good is the new system, reckon the engineers, that it will better more usual locking differentials in most situations. 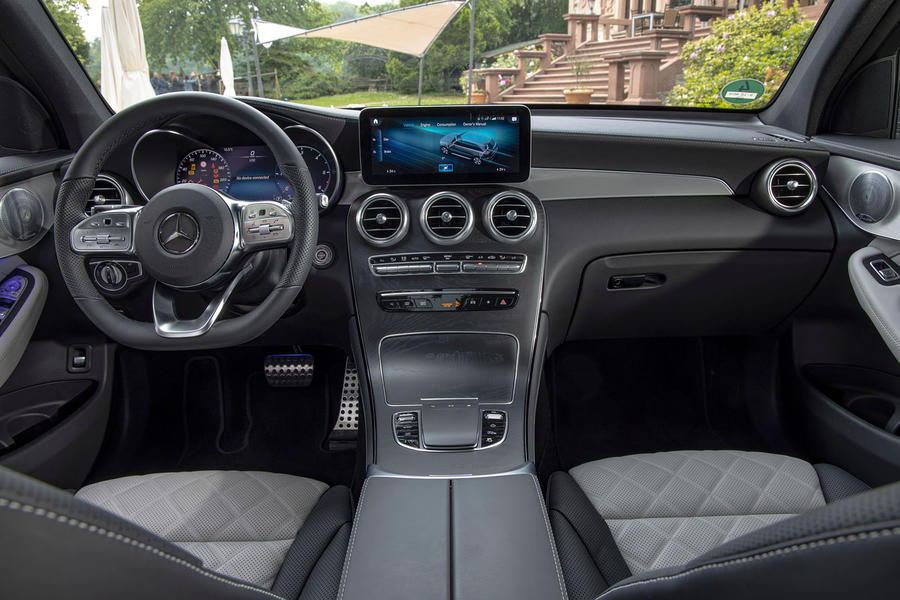 Of all the refreshed GLC models, it’s the 300d that makes the most sense, because the diesel engine’s lusty and unruffled delivery is perfectly suited to the relaxed and laidback nature of the car. This is an SUV that happily doesn’t trade too heavily on the 'sports' in 'sports utility vehicle', and it’s better for it. It also comes close to rivalling the Land Rover Discovery Sport for off-road agility, which is no mean feat.

The only caveat is that we’ve yet to drive a car on the standard steel springs rather than the air suspension that’s standard on the Premium Plus model or an expensive option on others.

Elsewhere, the changes to the GLC's relativey roomy and well-finished interior inject a welcome dose of sophistication, the slick looking screens being a vast improvement on the slightly clunky old layout. And while the MBUX’s voice recognition can be sometimes wrongfooted in most situations, it works well and allows you to access various functions without looking away from the road.

This is a sector that’s not short of choice, but in 300d guise, the GLC deserves your attention. It’s not the sharpest-handling, but by not seeking that dynamic compromise in what is ultimately a high-riding and relatively heavy package, it's a more rounded choice and easier to live with day to day. That said, rivals such as the Volvo XC60 offer a similar feeling for less, especially when compared to this eye-wateringly expensive AMG Line Premium Plus model. 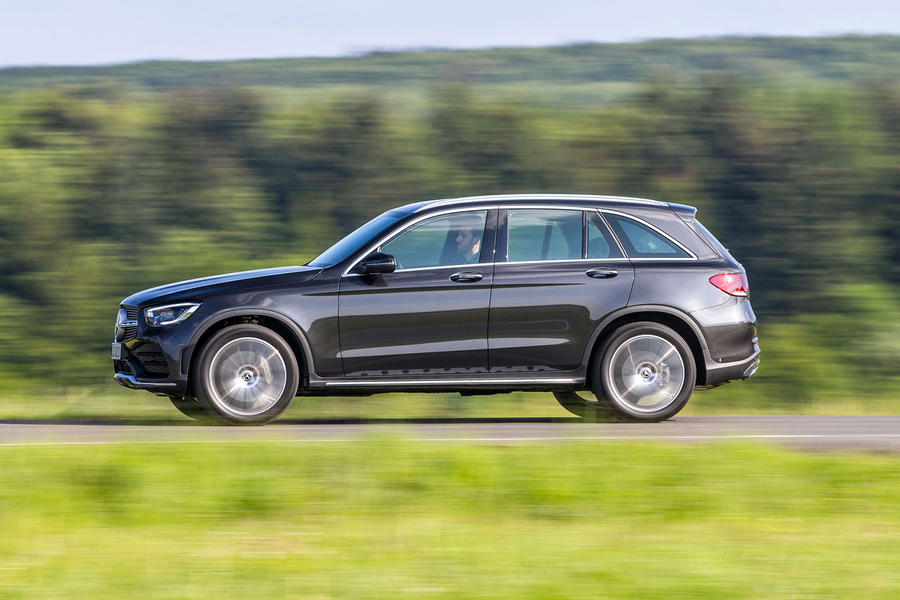 Pffff, forget it. They are taking the p***

Some reality needed in the market!

Stick to the 220d which still

Stick to the 220d which still has nearly 200bhp, plenty. A lot lower CO2 (139) so lower BIK. New engines are also RDE2 compliant so dodge the 3% diesel surcharge on BIK, something Autocar not mentioned.

Still not as cheap to run as a company car than the pre-WLTP models with 'unbelievably' low CO2 figures... lol