From £76,6808
Chauffeur-spec, long-wheelbase S-Class is still a laid-back, genteel and very effective luxury option, although some of its new digital features work better than others
Open gallery
Close

The Mercedes-Benz S-Class has always been something of a repository for the firm’s very latest powertrain, suspension and safety technologies. On the face of it, that would seem to be the case with the box-fresh new W223-generation version, which has just arrived on UK roads. But chauffeurs be warned: this time around, only really well-heeled owners may get the benefit of everything that the car can do.

Having had its model platform and suspension widely overhauled, the new ‘S’ will ultimately have camera-based predictive E-Active Body Control suspension, four-wheel drive and four-wheel steering: a combination never seen on any of its predecessors. There will be 48V mild-hybrid and plug-in hybrid powertrains on offer, as well as world-first frontal airbags for those oh-so-important people travelling in the back seats. Some quite limited fully autonomous driving functionality should also be possible in time – even if the S-Class will only ever be able to ‘drive itself’ entirely legally in slow-moving traffic jams and on very particular road networks, and during ‘driverless’ parking.

For now, though, UK buyers are being asked to wait for much of the technology mentioned above. If you want all of it, you’ll likely have to spend a tidy six-figure sum on a Maybach-branded S-Class.

Mercedes is opening up the UK range with the car’s bottom-end models. There’s currently a choice of one mild-hybrid six-cylinder petrol and two diesel engines, and either standard- or long-wheelbase bodies. The lesser S350d diesel is the only version of the car that can be had with one driven axle rather than two.

For now, all UK models roll on adaptively damped air suspension and all have conventional steering. If you want the upper-level, 326bhp S400d diesel that provided our first right-hand-drive test drive impressions, you have to pick the longer body. 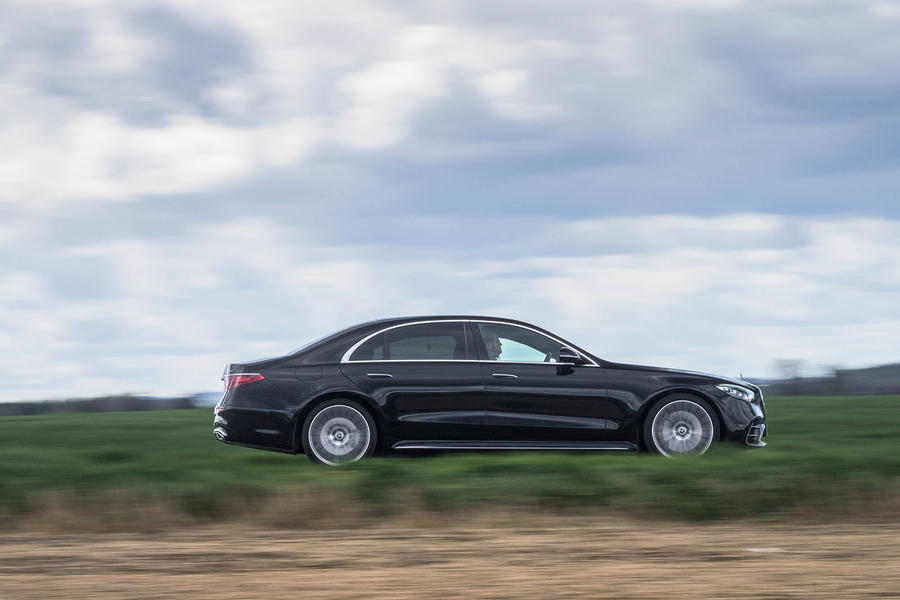 Well, it’s certainly long. Having grown a bit in all dimensions, the extended version is now more than 5.3m overall, and has a 3.2m wheelbase within which you could (almost) fit a Reliant Robin (this time next year, Rodney, we'll be S-Class owners).

Those travelling in the back will find seats every bit as comfortable and adjustable as the excellent ones up front, just as a limousine passenger should. The second-row chairs are heated and ventilated, and have electric recline and extension adjustment, with pillows on which to rest your head. They don’t yet have the massage function of the front-row seats, though. Passenger space is good, but leg room is notably better than head room, the latter likely to come up short for those over 6ft 4in tall.  The boot is vast enough to swallow several big flight cases, though.

The S-Class’s old ‘sleeping seat’ functionality, which allowed the nearside front seat to slide and fold forwards and the rear seat behind it to extend almost flat like a bed, isn’t available on the new version yet. Like the rear-seat flatscreen displays, it’ll come later – and probably first on the Maybach version. It’ll be a bit of a theme, that.

Without that extra steered axle we covered earlier, the S-Class’s sheer size can make it tricky to drive in tight spaces; around multi-storey car parks, too, of the sort that posh airport transfer specialists do frequently have to negotiate, let’s not forget. The car will overhang a typical UK parking bay at both the front and rear. Visibility is better than in some big saloons, with a full suite of parking cameras seeking to cover for the car’s sizeable B-pillars and big, padded headrests (which can be near-impossible to crane your neck around at junctions).

Out on the road, though, the S-Class’s size is less of an issue. It feels wide on some single-carriageway roads, but its overall width is at least easy to judge, and the car is always surprisingly easy to operate and drive at a basic level. Performance, ride and handling all remain geared and tuned very much towards comfort, refinement and smoothness. Soft air suspension delivers the wafting ride that drivers and passengers alike will expect. By and large, this is a very comfy and quiet car. 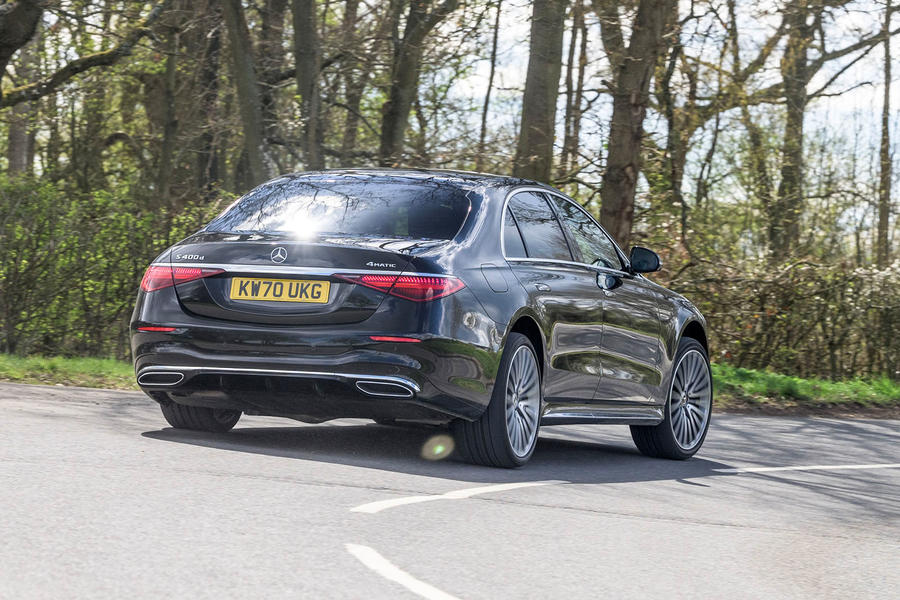 However, that ride is considerably better on a well-sealed A-road than a craggy urban surface. The 21in alloy wheels and low-profile tyres of our higher-trim-level Premium Plus Executive test car made for good cabin isolation, but not outstanding on-board refinement. They failed to smooth over the sharpest ridges around town, the suspension thumping a little over drains and manhole covers (they can be hard to avoid in a car so big). They also made for a motorway ride that, while very agreeable in the main, could occasionally turn either fussy or slightly coarse, depending on the surface. Smaller wheels can be had, but not if you want a relatively equipment-rich car, and most surely will.

Mercedes’ 2.9-litre turbocharged diesel 400d engine is a good fit for the S-Class, proving torquey, quiet (except when working hard at revs) and real-world frugal, too (40mpg at a fast cruise). All it lacks is much in the way of alluring audible charm.

Pedal response is ever gentle and progressive, and the car’s outright performance level greater than most will regularly tap. Handling is secure, contained and very predictable, delivered through fairly light, filtered, medium-paced, easy-going steering. Although the S-Class will tolerate being hurried along, close body control and particular cornering agility don’t really feature among its dynamic strengths. Frankly, nor should they.

However, more so than the car’s size or how it rides or performs, it’ll be your reaction to the S-Class’s new ‘digitally enriched’ cockpit that will likely decide whether you’ll really get on with it or not. Between its 3D digital instruments, its busy, extra-large augmented-reality head-up display, and its looming 12.9in MBUX touchscreen infotainment system (the first two are options), the car seems to broadcast information at you in something of a distracting onslaught at first.

The 3D instrument display may be novel but it can also be a challenge to focus on, depending on what it's actually displaying at the time. (It's actually got two separate overlaid screens that target your left and right eyes independently.) Meanwhile, the navigation arrows that appear on the head-up display to indicate which exit you need to take at a roundabout, or which side road you’re aiming for, aren’t always as helpful as you might imagine they’d be.

Once you’ve learned to configure the car’s various displays to your preference, the effect is less full on and more intuitive; but while some of its digital display features can be useful, others certainly seem faddish and superfluous. They’re there for the wow factor, without question. 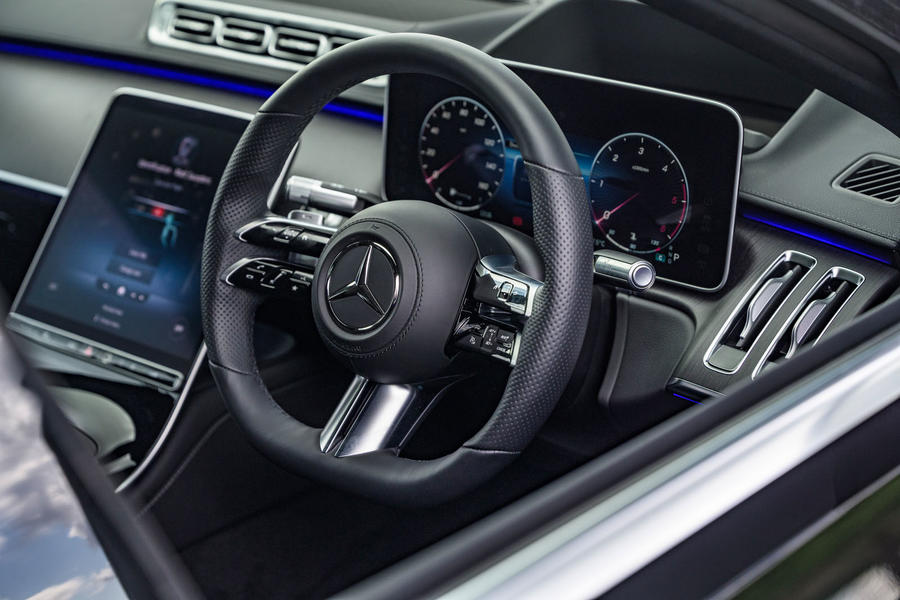 The truth is that unless you're a particular fan of tablet-style touchscreen displays and slickly rendered computer graphics, you may very well hate this car. Mercedes is simply banking on the fact that you won’t.

The strategy may seem odd given that, at its heart, the S-Class remains a deeply traditional and conventional limousine to drive. But when you consider the impact that the Tesla Model S has had on the sales of large luxury saloons (the Tesla outsold the S-Class and its German rivals repeatedly over the past decade, both in Europe and North America), the significant ‘digitisation’ of this cabin may seem easier to explain. It's very much the way that the always-online luxury car market is going, because it has to be. As one colleague pointed out, you can't really do a meaningful 'over-the-air' software upgrade for a system that works through a button.

So if buyers like touchscreen Teslas so much, might they prefer a touchscreen S-Class? Some might. To me, it seems like quite the punt to take on a car with more than half a century of history behind it. In the long run, for ‘legacy’ automotive brands like Mercedes, beating Tesla won’t be achieved by copying them, will it? It’ll be by building on their acknowledged strengths; by making a better S-Class. This car is a very respectable effort, but I'm not sure that's exactly and resoundingly what it is. It just seems missing some of its familiar, confident old ‘best car in the world’ swagger somehow.

Is it really just adapting to survive; or has it been a little bit misdirected, I wonder. If some of those Model S owners start coming back, either to an S-Class or the forthcoming all-electric EQS, perhaps it won’t matter either way. Let’s see if they do. 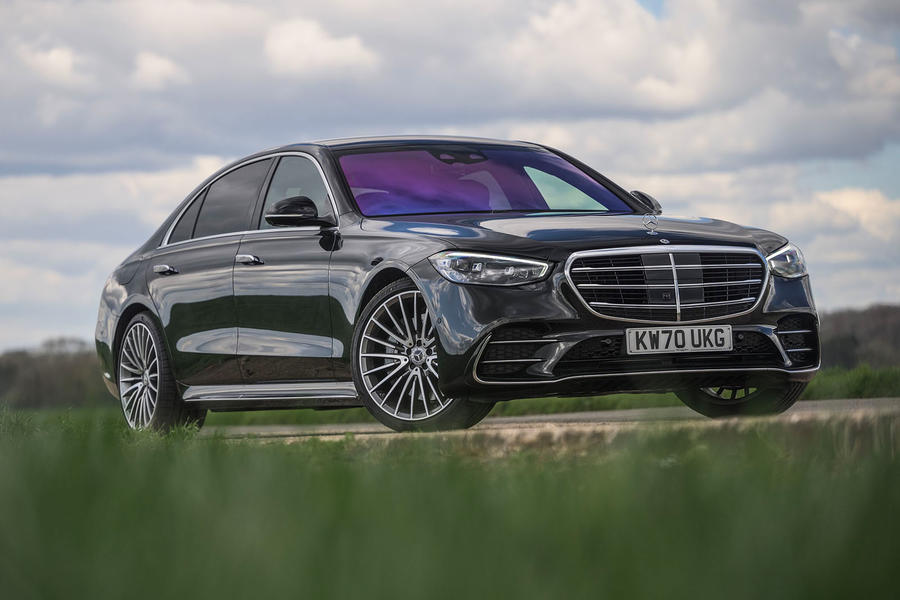 Log in or register to post comments
BlahBlah43 16 April 2021
Shame about the gimmicky screens. Seems Mercedes no longer wants the traditional S Class buyer anymore. Interesting move. Surly a sales disaster but it will just be blamed on SUVs
iant 14 April 2021

Having grown up with S classes and SLs and owned a couple of the latter I have always had a soft spot  for MB. Currently have a 540i which I love

Due to a problem with my sciatic nerve I had been toying with the idea of an S as they are only car I have driven with a flat seat. However this new S class looks quite horrible inside , a hybrid Tesla /A class . Not sure what they are thinking in Sindelfingen but my money isn't buying it

Another review of the new S-Class which appears lukewarm best. So-so ride, average handling, an ok engine, not as refined as it should be and an interior that to allow intents and purposes is unintuitive and difficult to operate. This car should have been nothing short of brilliant, the review suggests otherwise while 4 stars appears overly generous. The new S Class appears to be one of the most disappointing new cars launched and it even seems to be a lesser car than its predecessor. Another example of Mercedes no longer worthy of its premium status or the badge which once stood for excellence and quality.