From £98,7609
Share review
Track-focused flagship is the most powerful series-production car AMG has built, but a 720bhp V8 is just the start of its appeal
Share
Open gallery
Close

Now here’s a thing. In a world where new engines are rare: a new engine. Sort of.

Mercedes-AMG’s famous cross-plane crank 4.0 V8 burbler has turned into a flat-plane-cranked V8 for the new GT Black Series. It’s one of quite the raft of measures – others include some extraordinary aerodynamics – that turn AMG’s bespoke two-seat GT coupé into one of the most intoxicating track supercars of recent times.

Black Series models occasionally grace the top of an AMG model line. This is only the sixth so far: we had the SLK, which was pants, the CLK, which wasn’t, the SL, which was weird but cool, the C63, which was mega, and, lastly, seven years ago, the also ace SLS.

And now this, the GT, so far altered that if I hadn’t been aware it was an AMG GT, from its handling alone I wouldn’t have guessed it. So to the changes. Carbonfibre elements various make the Black Series 35kg lighter than an AMG GT R. The same aerodynamicist who developed the GT3 race car variant worked the wind-related bits. A Track Package, with titanium roll-cage and four-point harnesses, is standard (and a no-cost delete option). There are 10-spoke forged wheels, 19in front, 20in rear, and carbon-ceramic brakes. The car costs £335,000.

Then there’s the engine. What was a rumbly old cross-plane V8, deliriously engaging, has become a flat-plane V8, which means two cylinders fire at the same time. AMG has also changed, among other things, the crankshaft, camshafts and exhaust manifolds, which I suppose is obvious really. Bigger turbos with new bearings, higher boost pressure, a tweaked compression ratio and larger intercoolers also feature.

Flat-plane engines – like Ferrari and McLaren V8s – tend to rev higher than cross-plane versions. The crank tends to be lighter, although it changes the vibrations, and they can sound like a four-cylinder. Here, the rev limiter is up by just 200rpm to 7200rpm, although peak power comes in 500rpm higher.

Some power, too. At 720bhp, it’s AMG’s most powerful series-production car, and there’s 590lb ft alongside it. Which in a way makes it not dissimilar – power output, engine size, crank style, turbos – to the Ferrari F8 Tributo and McLaren 720S, but this in no way feels like it’s trying to copy those cars. The engine is in front, after all, even if they do say that it’s front/mid-engined.

The motor is a long way back under that vast, near two-metre bonnet, whose frontal underside is largely given over to cooling. That’s one of the reasons the floor isn’t completely enclosed, too. If your engine is behind the cabin, it is harder to get air in but is at least easier to get it out again.

Here, the engine sits very low at the front and a seven-speed dual-clutch automatic gearbox sits at the rear. The driver and (if you can persuade someone) a passenger sit between the car’s biggest masses. 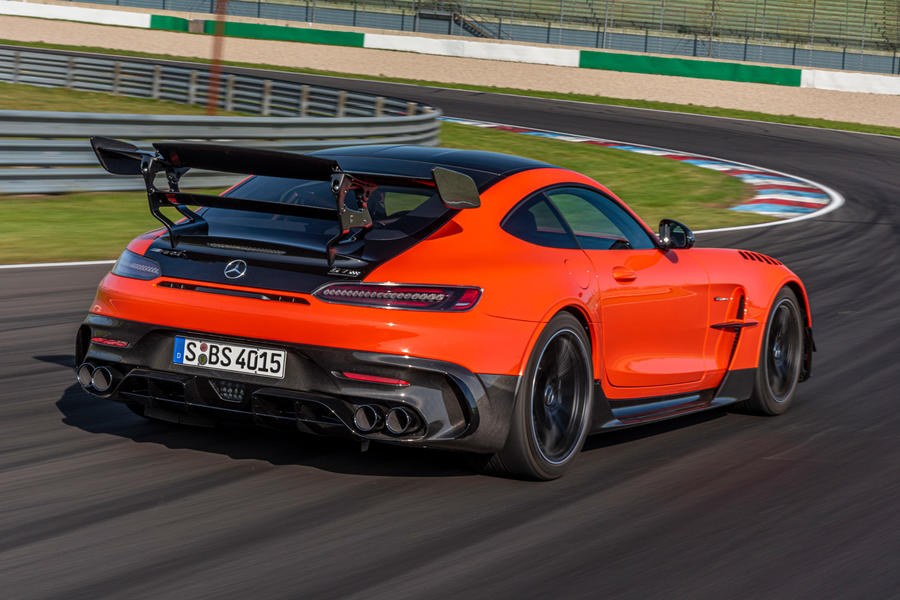 The interior is pretty racy. Those seats are brilliantly supportive and unforgiving and, oh, did you do up the harnesses before shutting the door? Once you’re in, the diddy gearlever, plus some drive mode options, are an elbow contortion behind you on the centre console, but there are shortcuts for some on the Dinamica-covered (it’s like but isn’t Alcantara) steering wheel.

The Lausitzring is quite bumpy, so I’m told the dampers might be better in Sport than Race mode. There are new coilovers but adaptive damping remains. I’m also told it’s bearable on the road but you wouldn’t want to daily it. We’ll have to find out another time, but my suspicion is that if your journey doesn’t involve a section of race track, you’ve probably got a more suitable car than this.

On a circuit, though, it’s terrific. Black Series cars are always quite loud. Like entering the engine room of a ship or a busy workshop, there’s always something cacophonic, and if it’s not pick-up on the tyres or road noise, it’s the engine. It’s usually the engine. The new V8 has a gravelly, endearing note – nothing like a normal AMG V8 but not, either, as sonorous as a Ferrari or as flat as a McLaren. I suppose you might want something that sounds a bit less like a slightly tuned Mk2 Ford Escort for your £335,000, but I quite like it.

What I like more is the way it drives. Give me a front-engined, rear-driven car with a tidy weight distribution and great dynamism and I’ll be happy for days, and this is precisely that kind of car. It’s like it has an Aston Martin V12 Vantage S’s balance but with Porsche 911 GT2 RS aggression and character. And that is just fantastic.

It doesn’t matter too much what you do with the dampers: the ride clouts and rattles over kerbs but otherwise seems pleasingly settled, not too harsh, and there’s a little lean and body movement in corners. Nothing awry, but more than I think you’d find on a 911 GT3 RS. The quoted weight is 1520kg (DIN), 35kg lighter than a GT R, but we put a GT R on the scales at 1665kg fully fuelled. Call it around 1600kg with some fuel and it’s not outlandish for a car of this size, speed and layout, and that takes so much cooling.

So it’s allowed to move around a little on its springs and the way it does so is terrific. It has absurd amounts of forward shove and brakes that have bags of feel and show no sign of fade. It pays to stay on them as you turn in. The engine, far back though it might be, is still ahead of you, and I suspect it’d push on a little if you didn’t manage the entry speed and corner weights. Certainly in higher-speed corners where no braking is involved, there’s steady-state stabilising understeer.

At speeds low or high, though, you’ve got the option of 720bhp an ankle flex away. The GT’s inner Mk2 Escort growls up and straightens the car’s line. With stability control full on, or even part on, it limits power before the car’s totally straightened. With it off, there’s a 10-stage traction control system and the car rotates mid-corner more willingly.

What’s particularly rewarding, though, and I don’t remember it from the GT R, is how communicative the Black Series is. The steering is light but weight and feel build naturally and intuitively, not to GT3 RS levels but certainly to talkative ones. 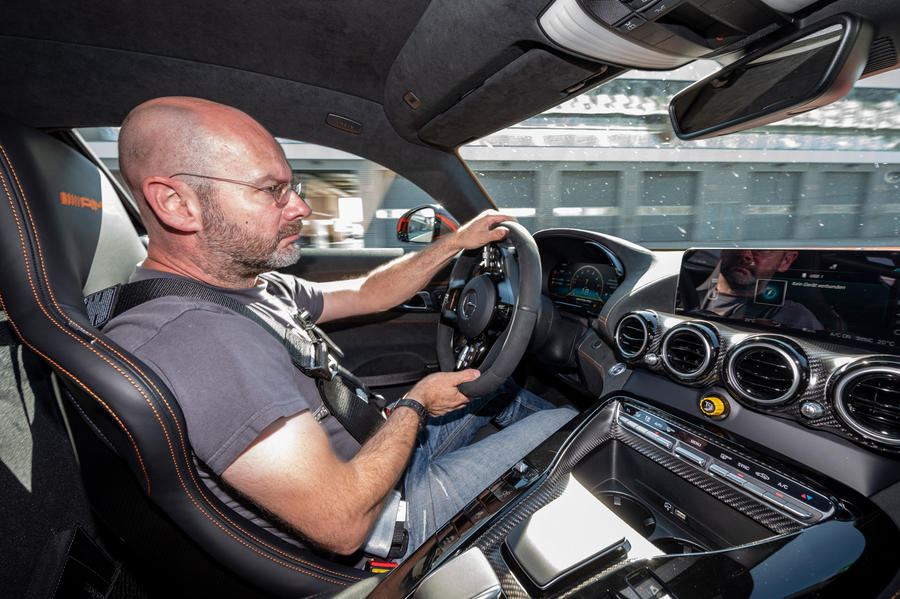 I remember driving the GT R at MIRA and being fairly uninvolved but getting out and being blown away by the lap time. Here, you can drive the crackers off the Black Series, feel involved and bonded into the process and, at the end of it, it’s likely to have lapped about five seconds slower than a full-fat GT3 race car.

What a thrill. I think the Black Series is as intoxicating and rewarding as a GT-series Porsche or a BMW M4 GTS – a car that I like a great deal but some of my colleagues think is terrible. Maybe they’ll say I’m wrong to like this, too, but I don’t think so. Experience suggests AMG doesn’t always nail its Black Series cars. I think this one is spot on. 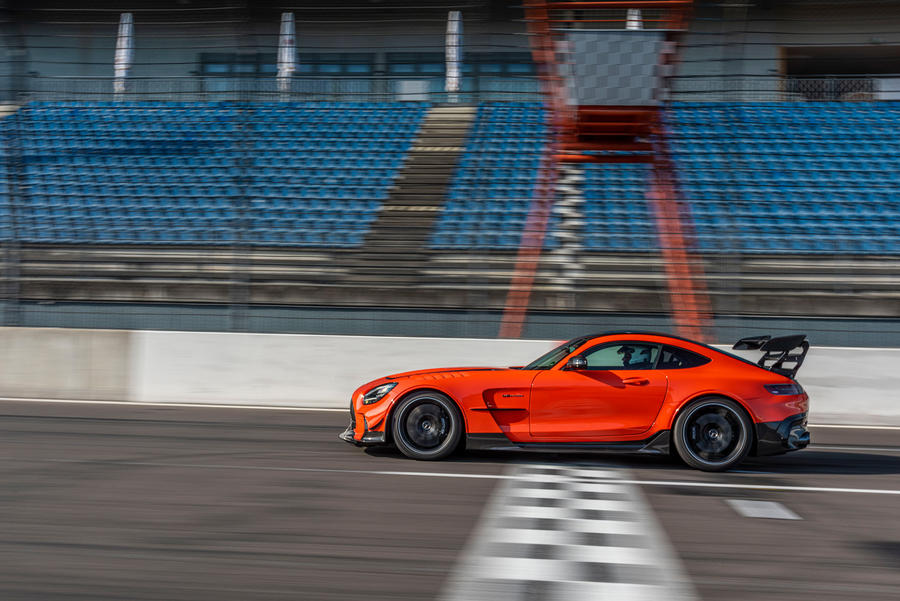 Nothing wrong with the car from the review, but at between two and three times the price of a 911GT3RS is seems to me way overpriced? It will be interesting to see its Nordschleife lap time given its a track focused road car.

Yeah, for what it does, it's expensive, it's not head n shoulders better than the rest, it gives you its version of Mercedes fast, personally, I think th3 wing I'd a bit Halfords, an unnecessary option aesthetically, the car without has a lovely shape, this winged affair ruins it, but, if your going to Track it then the wing will help I guess.

The size of the bugger!

It's obviously a weapon but i can't get past its ungainly and overweight proportions. Any amount of visual trickery and track add-ons can't disguise the fact that it's a porky bloater.

Yeah agree with that michael, in many ways it reminds me of the Dodge Viper ACR.

In whatever guise or spec the

5 October 2020
In whatever guise or spec the AMG GT is absurdly wide. The Black series only makes this long bonnet anachronism look even more odd.

Agreed abkq, definately not a looker from my perspective either, but maybe not an issue if you buy one solely to track?

Team Xtreme Houston is one of the best motorcycles selling website in the USA where you can buy Can-Am Spyder® F3-S SE6 Limited at a sensible value rate. Check it out.

I loved the review of Mercedes-AMG GT Black Series 2020. Mercedes is my favorite car.