The Lamborghini Huracán Evo is less a mid-life facelift and more a comprehensive re-engineering exercise. Whereas the original Huracán was notable on the one hand for its show-stopping engine but characterised on the other by uninspiring dynamics, the more expensive, lightweight Huracán Performante that arrived two years ago was a genuinely brilliant supercar. This is Lamborghini’s attempt at bridging that gap.

The Huracán Evo doesn’t have the weight-saving measures of the Performante, nor its aerodynamic downforce. What it does have is the same uprated V10 engine (albeit with software differences) and a raft of new chassis technologies. Introduced for the first time on the Huracán are rear-wheel steering and torque vectoring, and those new systems - along with the existing dynamic steering, magnetic dampers, stability control and the powertrain - are all integrated into one central brain, called Lamborghini Dinamica Veicolo Integrata (LDVI).

The idea is that the various systems work in harmony, so rather than busily doing their own things and achieving not very much, they actually communicate with one another for the best results. The dampers, traction control and torque vectoring will operate together to deliver the best traction, for instance, all the while considering the steering angle and throttle position.

This is a first for Lamborghini and a significant development, although the likes of Ferrari and McLaren will tell you they also do something similar. Capable of responding in more or less real time (just 20 milliseconds), LDVI primes every one of the parameters under its control to make the Huracán Evo the most responsive and alert Lamborghini to date. It can even predict the driver’s intention one moment to the next, readying the torque vectoring, or the dynamic steering, or the rear-wheel steering even before the driver has made the anticipated input. And so the car responds ever more immediately. Despite being heavier than the Performante, the Huracán Evo is both more agile, says Lamborghini, and faster around the handling circuit at Nardo.

That special-edition model is powered by the familiar normally aspirated 5.2-litre V10, augmented with titanium inlet valves. It’s that same unit that’s been dropped into the Huracán Evo, but with its own engine management software. Power is up to 631bhp at 8000rpm and torque rises to 443lb ft at 6500rpm. With four-wheel drive, the Huracán Evo will register 62mph in just 2.9sec and run on to ‘more than’ 202mph.

There are further changes within the cabin, including a beautifully rendered 8.4in touchscreen display in the centre console, and revised bodywork, which improves aerodynamic efficiency. The airflow around, underneath and over the car is cleaner now, reducing drag, while downforce has leapt up by a factor of seven, thanks to the new front splitter and slotted rear spoiler (the Evo still doesn’t produce anything like the downforce of the Performante, though, which has far more prominent aerodynamic devices).

Interestingly, there still isn’t a customisable Ego mode, which means you cannot separate the firmness of the dampers from the drivetrain setting. That means Corsa mode, the loudest of three, will probably be usable only on race tracks and the very smoothest roads. 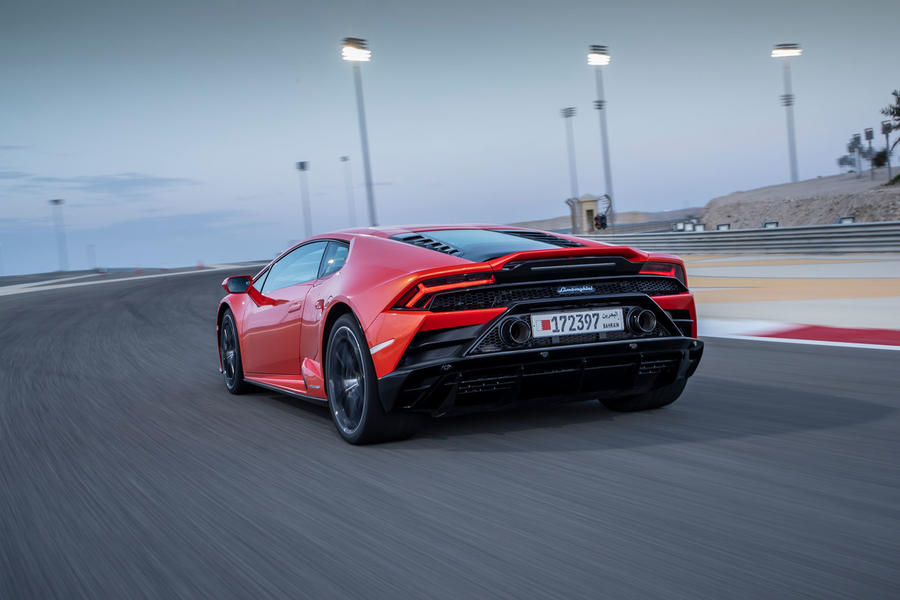 For the time being, we can only say what the car is like to drive on a circuit – the launch event limiting us to a handful of laps of the Bahrain Grand Prix track. In that setting, the new model is not only faster and more agile than the earlier base-model Huracán, but more fun to drive too. More fun than the Performante as well? Perhaps, but we’ll reserve judgment on that front until we’ve spent more time behind the wheel.

The original Huracán could be a frustrating car both on road and track with prescriptive, insistent handling. It would defiantly do what it wanted to do - which quite often was to understeer through corners - rather than responding willingly to the driver’s own inputs. It all made the Huracán a far less rewarding supercar than rivals from McLaren and Ferrari.

But no more. On the optional, stickier Pirelli Zero Corsa tyres, the Evo has more grip and a more resilient front end, which now tucks into low-speed corners so immediately - thanks to the rear-wheel steering - that you’d swear those tyres were racing slicks. In longer, high-speed corners, the front axle will begin to wash out a little - true of any road-biased car - but depending on the corner, you’re just as likely to feel the rear end start to come around. The Evo’s newfound poise and more neutral chassis balance are central to it being more engaging to drive.

The Lamborghini Dynamic Steering - now the only steering option available, the passive system having been dropped - is much improved, offering a more consistent and readable helm than the highly dubious dynamic system that preceded it (on track, at least). Unlike before, you now have a clear sense of how much grip there is in reserve across the front axle and you can position the car intuitively and with precision. No more second guessing. There still isn’t the hardwired feel and sense of connection that you get in a McLaren with a hydraulic steering rack, but that’s to be expected.

From really high speeds under very heavy braking, the car will squirm and fidget quite markedly. For a three- or four-lap stint, the carbon-ceramic brakes hold up well, but the impression is that beyond that they’ll begin to wilt. The pedal itself, meanwhile, could be firmer and more talkative, although that would be compromise too far for road use, says Lamborghini.

In the two modes that are worth using on a circuit - Sport and Corsa - the Evo is either playful, oversteery under power (much more so than the previous model) and keen to be thrown around with abandon, or locked into the track surface for the highest cornering speeds. It is in that Corsa mode, with the stability control system left in its intermediate position, that the Evo is at its fastest around a lap, even with a professional driver at the wheel.

The impression you should go away with after reading this is of a car that’s now more rewarding to drive, less frustrating right at the limit, lively and entertaining when you want it to be and scalpel-sharp and super-fast when you’re setting qualifying laps. It seems as though Lamborghini has at long last let the Huracán off the leash (Performante notwithstanding) and allowed it to be a direct and worthy rival to the best cars in this sector. The V10 remains one of the most spectacular performance car power units on sale with a soaring, baleful soundtrack. Its thrilling power delivery makes you never want to drive a turbocharged car again. Over the final 3000rpm to the redline at around 8500rpm, the car feels relentlessly accelerative, so what it lacks in outright punch through the mid-range compared with a Ferrari 488 GTB or McLaren 720S, it more than makes up for in its sense of drama at the top end. For track driving, meanwhile, the twin-clutch gearbox is just about without fault.

If there is an overriding achievement here, it is surely that the Evo’s suite of new technologies and chassis hardware, plus the predictive LDVI brain, never give the impression of knowing better than the driver. It is still the fleshy lump that grips the wheel that is in charge and in control, and if he or she makes a mistake, the car will not undo it. 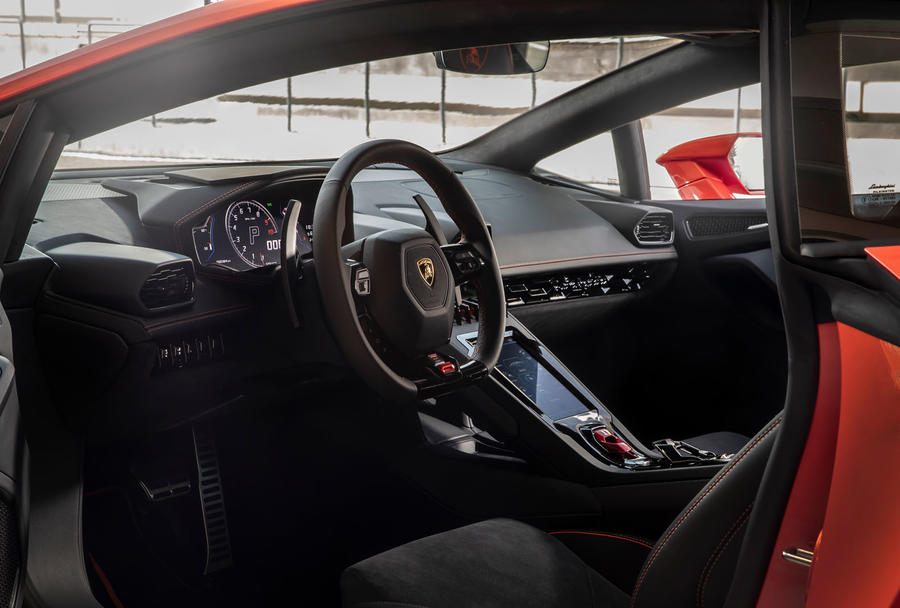 There are now many more reasons to buy a Lamborghini Huracán than there were a couple of months ago. The Huracán Evo uses its hardware and technology to make the car not only faster and more responsive in theory, but more rewarding and engaging in practice.

With a base price in the UK of £206,000, however, Lamborghini’s V10 supercar has become notably expensive. In fact, it no longer goes up against the likes of the Audi R8 V10+ and McLaren 570S because it is so much costlier than both. Instead, it should be considered a rival to the 488 GTB and 720S mentioned above. Against such illustrious opposition, the much-improved Huracán might still be found wanting. 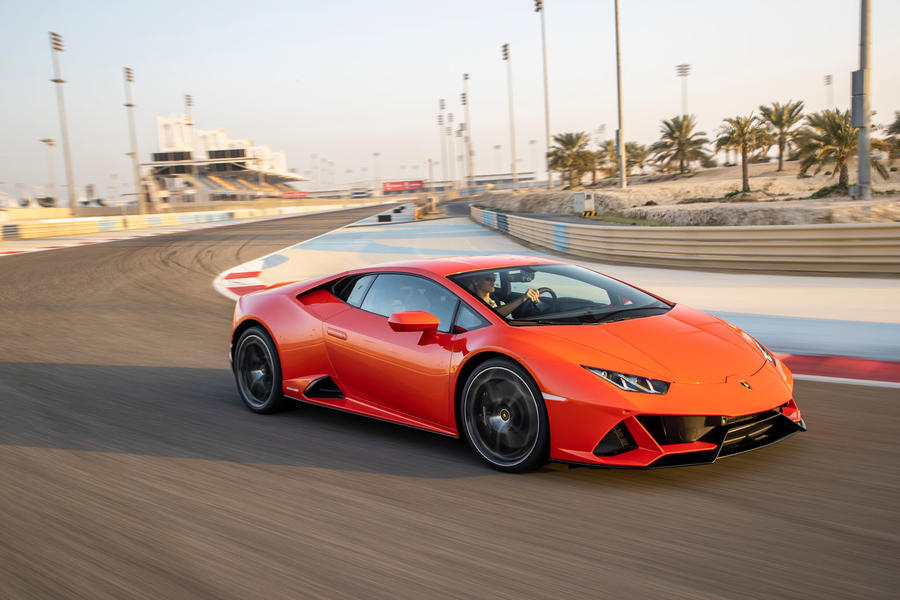 Here in the US, the Evo costs

Well, at least this version has lost that vile 'I'm a Saturday Sloane Avenue Twat' look....

Just avoid the gold wrap and the baseball cap.....and you might get to look like Bob Wallace in the original LP 400.

Either V12 or it is no Lamborghini.