From £27,5455
Jeep Cherokee gets a new face and updated safety tech for 2019, but it's hamstrung by an unsettled ride, a coarse engine and a high price
Open gallery
Close

The Jeep Cherokee has come a long way since the first-generation Jeep SJ model was launched way back in 1974. The fifth-generation Cherokee we have here has lost the boxy, all-American image of that original, instead morphing into an SUV that carries very few features indeed to help distinguish it from its competitors in what is now one of the most crowded segments there is - seven-bar grille aside.

For 2018, Jeep has treated the Cherokee to a facelift. Gone is the squinty-eyed front end of the 2014 model; it has been replaced by a far more classically handsome (if a little forgettable) nose. At the same time, a range of new active safety systems and updated infotainment software have been introduced.

For the UK, the sole engine available is likely to be the same 2.2-litre four-cylinder Multijet II diesel from before, offered in a single 192bhp state of tune. This is paired with a nine-speed automatic gearbox that, in our pre-production test car, sent its power to all four wheels.

As before, the Cherokee’s suspension architecture consists of MacPherson struts up front and a multi-link arrangement at the rear. 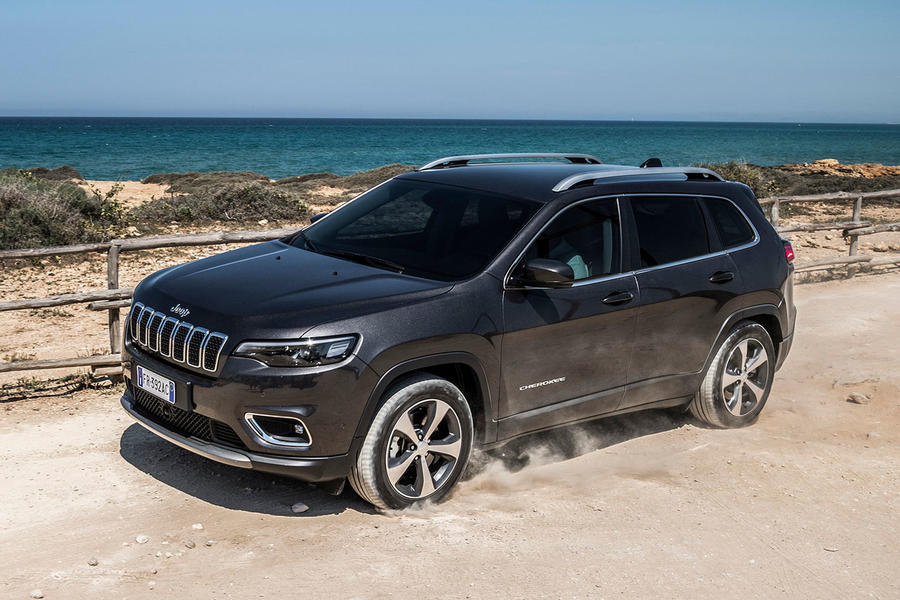 Frankly, it's rather disappointing. In fact, there’s precious little about the manner in which the Jeep Cherokee drives that would give any of its rivals any real cause for concern.

The ride, for instance, is almost perpetually choppy and unsettled, with even the smallest imperfection in the road surface causing it to lose nearly all of its composure. Short-wave undulations cause its vertical body control to all but go out the window, while potholes and expansion joints send fairly forceful jolts through the cabin - even at lower speeds. On all but the smoothest roads, the Cherokee doesn’t make for particularly comfortable motoring. That said, on those rare sections of smooth road, the Cherokee does regain some composure, but not enough to make up for its shortcomings elsewhere.

One such shortcoming is its engine. With 192bhp and 332lb ft on tap, the Jeep Cherokee feels like it’s capable of hitting its claimed 0-62mph time of 8.8sec, but the manner in which it goes about completing that undertaking isn’t what you’d call calm or refined. The MultiJet II motor is particularly vocal under throttle, while the timbre of its four-cylinder soundtrack is harsh and unrefined - although things do quieten down when you return to a steady cruise.

Then there’s the nine-speed auto ’box, which is not only slow to respond to your inputs but also indecisive about which of its nine ratios it would prefer to select at any given time. Overtaking manoeuvres, therefore, require a good deal of forethought, because you need to factor in the eternity it seems to take for the gearbox to respond to your right foot hitting the kickdown switch. Opting to use the steering wheel-mounted paddles doesn’t do much to remedy this tardiness, either, because the response times are equally as lethargic.

There is at least a decent amount of weight in the steering, but its low gearing doesn’t lend the Jeep a front end that feels particularly enthusiastic about the idea of changing direction. And when it does turn in, you find you don’t have to be travelling all that quickly to cause understeer to rear its head. Taking sharper corners even at low speeds can lead to fairly vocal protest from the front tyres.

The Jeep Cherokee's cabin, meanwhile, doesn’t offer much in the way of practical or material appeal to tempt you out of more mainstream rivals. There’s a good-sized - although far from class-leading - boot that offers 448 litres of cargo capacity, while heated nappa leather seats provide agreeable levels of support and adjustability. However, rear passenger space is tight; taller adults will find that their knees touch the front seatbacks, while the optional panoramic roof severely compromises head room. Soft-touch and scratchy plastics don’t do much to lift the cabin’s ambience, either, and the 8.4in infotainment system just isn’t on the same level as those you’ll find in rivals, despite its upgraded software. Apple CarPlay and Android Auto do come as standard, at least. 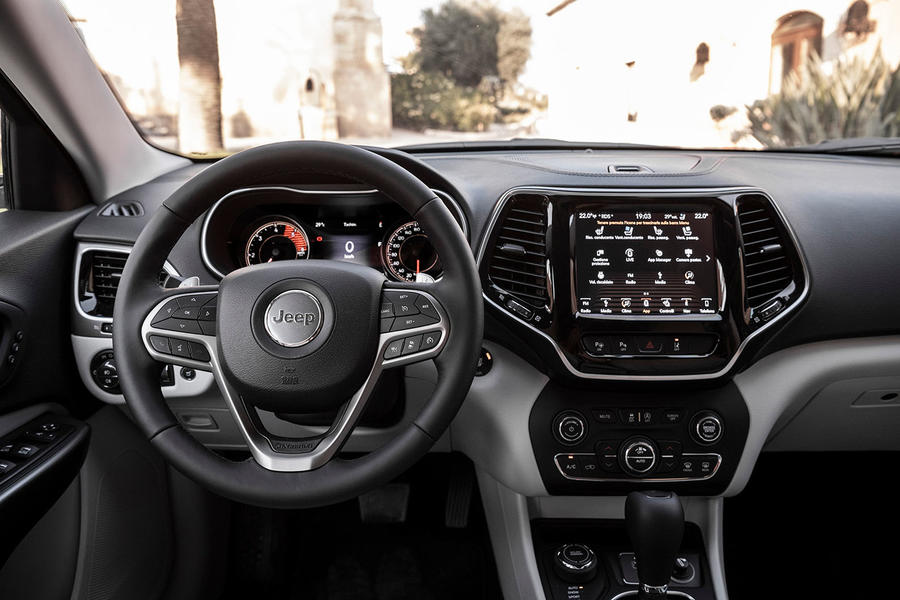 Speaking of rivals, the Cherokee finds itself in a bit of a tricky position. Jeep says it goes up against the likes of the Hyundai Santa Fe, Kia Sorento and Land Rover Discovery Sport, yet all of those SUVs offer a third row of seats. The Cherokee, on the other hand, does not.

Then there’s the issue of how much it costs. Jeep will offer just two trim levels - Limited and Overland - when the Cherokee goes on sale in the UK next year, and both sit at the plusher end of the range. While UK pricing has yet to be confirmed, we were told that the Limited model - the same as our test car - would be priced at €54,900 in Austria, while a figure of £40,000-£45,000 should be expected for the UK. While its higher default spec does mean it comes generously equipped, its price places it in BMW X3, Volvo XC60 and Audi Q5 territory. Next to those cars, the Cherokee seems out of its depth in terms of not only refinement, dynamic capability and material appeal but also badge desirability.

It’s not economical, showing an indicated 27mpg over the course of our test drive, and if the pre-facelift model is anything to go by, residual forecasts likely won’t be that impressive, either.

It does come with a full five-star Euro NCAP safety rating, though. But is that enough to make it a recommendable buy? Afraid not. 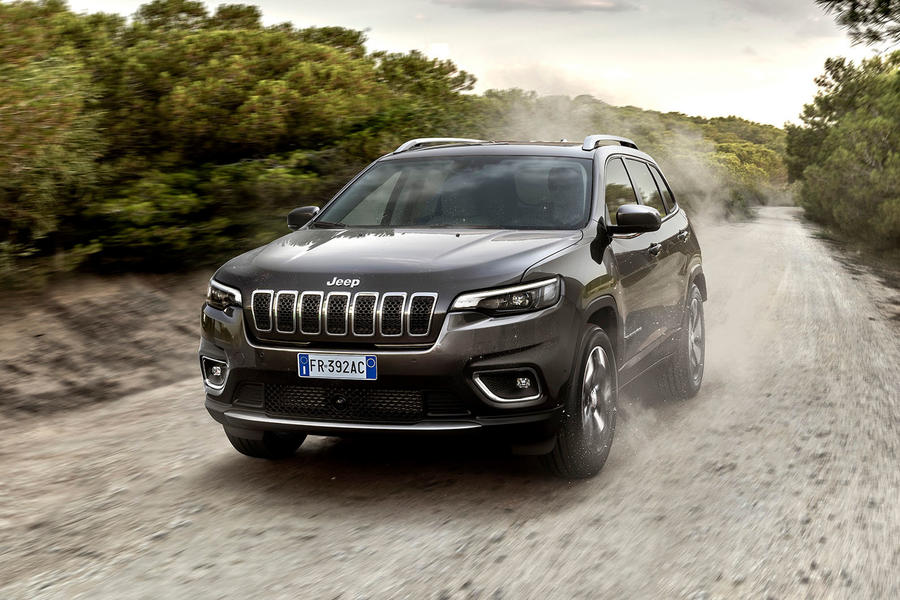 All the 4x4 heritage appeal and authenticity in the world won't save Jeep if it continues to treat potential customers in Britain like idiots. A small SUV fitted with this awful fourpot motor most definitely ain't a premium product; offer it at sub-£30k and watch it fly off the shelves.

Whilst I accept that this is

Whilst I accept that this is inferior to premium SUV's from other manufacturers and where the reviewer states against the Q5 and X3 etc it is inferior and out of its depth but where it states but also badge desirability seems wrong to me, the Jeep badge is more desirable to me for a 4x4 as it has more heritage and as someone else has stated probably made the first 4x4, not the first awd car but the first 4x4 before we started calling them SUV's. Fca really need to pull their finger out and start producing cars worthy of the badge.

Need to re-name it their

Need to re-name it their 'Limited Sales' version. Maybe one of these days the US car-makers will give up on, or reduce the number of 'American Dream' models they make and get one of their European subsidaries to provide them with a complete car manufacturing plant?