From £43,77010
BMW's smallest M-car has been given adjusted suspension and engine upgrades by tuning firm Litchfield. Has it brought the best out the coupé?
Open gallery
Close
by Dan Prosser
9 January 2018
Share

Lichfield’s package of upgrades for the BMW M2 is so expertly judged and so brilliantly executed that this now feels like the car the M2 should have been all along.

That’s not to say BMW missed the mark with its smallest M-car. In fact, even in standard guise, the pumped-up two-door is a really entertaining machine. But the engine is short on character and on yumpy, cresting roads, the suspension just doesn’t keep the mass of the body under tight enough control.

Fling an M2 along a moorland road at speed and on more than one occasion you’ll feel the rear end go light over an undulation as it continues to rise skywards, making you worry for an instant that it might drag you off the road entirely. It’s heart-stopping stuff.

Litchfield is the Gloucestershire tuning company that’s perhaps best known for its Nissan GT-R upgrades. Nowadays, though, the company modifies everything from Porsches and Ferraris to Audis and, of course, BMW Ms.

Litchfield’s M2 upgrade package includes an ECU remap and bigger intercooler to lift power from 370 to 420bhp, a titanium Akrapovič cat back exhaust system and adjustable AST suspension. The kit also includes a set of 10mm spacers that help to fill the wheel arches and make the most of the modest drop in ride height.

Running a little lower to the ground and with its wheels squeezed out slightly, the M2 looks better than ever. 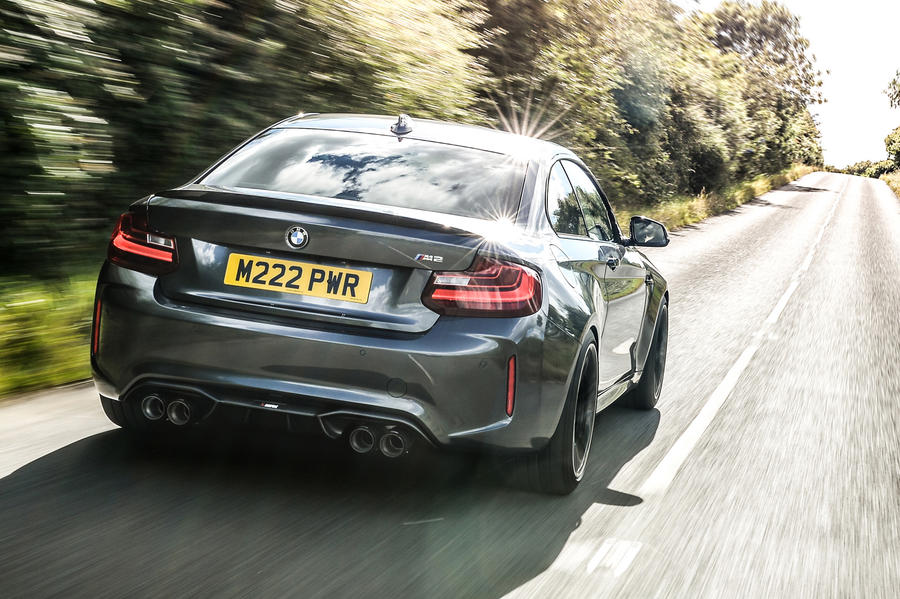 The AST suspension is road-biased rather than being set up for the track; this certainly isn’t an ultra-stiff, very uncompromising chassis. The dampers are adjustable for bump and rebound so owners will be able to tweak the ride and handling to their own tastes and tighten things up for circuit use.

Set up the way it was during our test, the Litchfield M2 rides with an underlying tension at very low speeds, which matures into a very well controlled and sophisticated ride quality at higher speeds. Given the short wheel travel, the relatively stiff springs - this is a high-performance car, after all - and the rubber-band tyre sidewalls, the car dealt with an uneven and bumpy road surface quite brilliantly. Whereas some performance cars jab at a spike at your kidneys as their body skips and hops over bumps, the Litchfield M2 is fluid and composed – BMW more so, certainly, than the standard car.

Body control is also massively improved, meaning you feel so much more confident now that the car will keep its mass in check as the road crests and falls. Litchfield’s suspension upgrades are transformative.

The usual M2 qualities are very much in check. The front end is enormously grippy, with very little inherent understeer, and the car feels light and agile. It’s a huge amount of fun to thread along a winding road.

Even in damp and very cold conditions, the rear tyres find good traction. Despite the uplift in power and torque, the M2 actually puts its power down to a wet road very effectively, even in second gear. The BMW M4, by contrast, delivers its torque so abruptly that the rear tyres slip long before they’ve had a chance to wind themselves up, making the car leap headfirst into its own traction control safety net.

The Litchfield M2 is much less of a wild ride than an M4 and better controlled than the standard M2 as well. Overall, it’s much more enjoyable to drive than either of them.

It doesn’t feel a whole lot faster in a straight line than the factory M2, but the engine does is a much sweeter thing now. It opens up from 2000rpm and pulls with such linearity right the way to the limiter, and with such free-revving energy throughout the rev range, that you would hardly believe it was turbocharged. The Akrapovič exhaust also adds some song, plus some grin-inducing pops and cracks on the overrun. 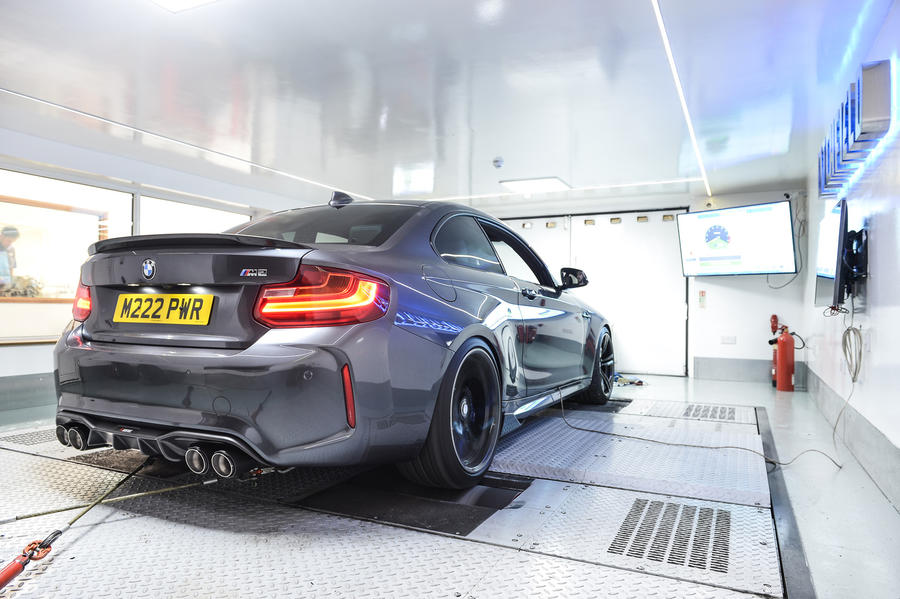 The BMW M2 has never felt better than this. In fact, equipped with the Litchfield suspension upgrades, the M2 might well be one of the most entertaining performance cars at this price point. At £9755, the full upgrade package isn’t cheap, but if you substitute the Akrapovič exhaust for a perfectly decent Milltek item, you’ll pay £6361.

You can have each item fitted individually, too, and if you don’t want to splash out on the full kit, we’d recommend fitting the transformative AST suspension right away. 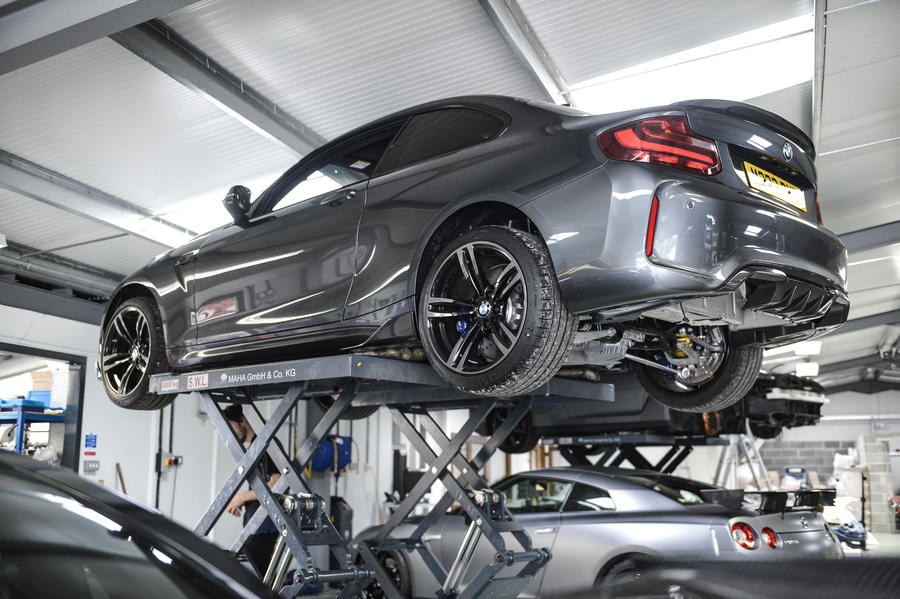 Should you buy one ?

Is the manufacturers warranty void ? Concerning the Litchfield Audi RS3 2018, you said - upgrades like this one will void your manufacturer warranty. If you’re very protective of your warranty, then, perhaps it’d be best to let it expire before you pay Litchfield a visit.

1. Does choosing the suspension mods alone invaliate a BMW warranty?

2. How can a few thousand of suspension be so much better than what BMW chose for their car? Are the components inherently better or is this AST system tunes for UK roads whereas BMW has to send the car out to all markets?

Either way, Litchfield are getting some very good press at the moment.

A very good point, well made.

In consideration of the M2, M2 Competition, M2 Litchfield et al and including the above well made point, who really needs 'em?.

The stock M240I coupe (340hp), with Sport automatic gearbox covers the not so relevant 0-60mph in 4.6s, costs around £37K, less discount, even less at 12 months as an approved used car. In day to day driving, what use the other cars, only truly being wallet emptiers and ludicrous bar stool talking head boasters material.