From £29,7008
Familiar engineering substance and new interior allure lift the 4 Series' appeal, even if the styling doesn’t. Still great to drive; would be equally great to use.
Open gallery
Close

The lightest, most aerodynamic and fuel-efficient version of the all-new second-generation BMW 4 Series – which, in all five of its two-door coupé-bodied launch derivatives, has now landed in the UK. Pretty soon, then, if you haven’t already, you’ll get a chance to make up your own mind about how it looks in the metal.

And if your opinion reflects what seems to be the pretty widely shocked, confused and occasionally disgusted majority consensus, your next question might well be to wonder what the 4 Series’ wider package can possibly do to make up for the deficiencies of what we might call its ‘impactful’ styling. That’s a word chosen quite deliberately, by the way – because the only rationale this tester can think of to explain why this car looks the way it does is so that you might be able to inadvertently involve it in a light frontal collision and, from a distance at least, not immediately see the difference.

There are four engines on offer in this car to begin with; five versions in all if you count two- and four-wheel-drive derivatives separately. The range-topping 369bhp M440i xDrive is for now the only multi-cylinder option and is one of only two all-wheel drive options, the other being an xDrive version of the 420d. If you like your diesels with more than four cylinders, meanwhile, there will be 430d and M440d options arriving on sale in the UK in the new year.

Among the more affordable four-cylinder options, though, BMW offers 181bhp 420i and 255bhp 430i turbocharged petrols, but only the diesels and the six-pot petrol get the benefit of BMW’s new 48V mild-hybrid assistance set-up. I’m not sure why that’s the case, but it certainly stands to widen still further the gap that has traditionally separated the real-world fuel efficiency of BMW diesels and petrols. Almost 20mpg now stands between the ‘WLTP combined’ lab test running economy of a new 420i and 420d, which is enough to make anyone think twice about whether they’re quite ready to move to petrol power for their next German coupé. 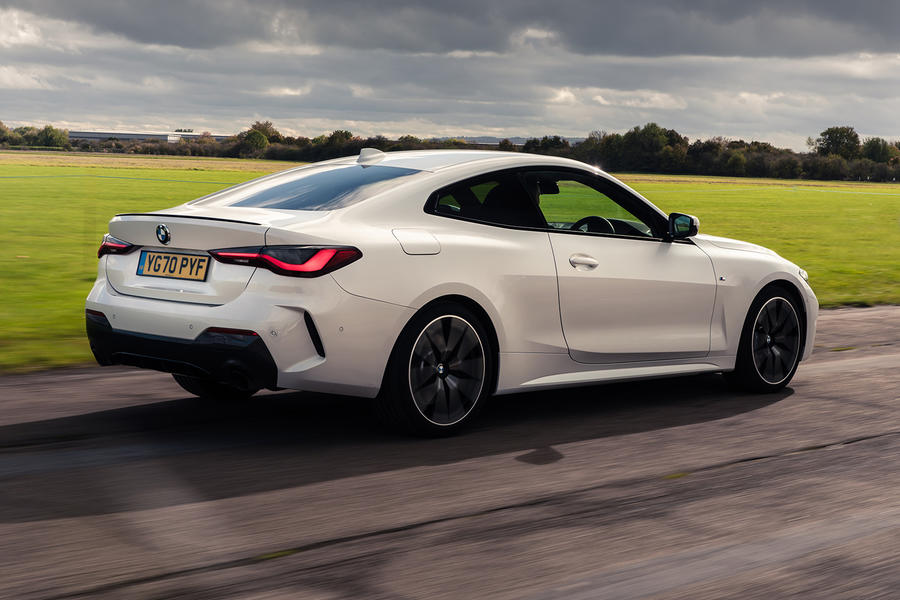 Our recent first drive in mainland Europe suggested that you won’t find many deficiencies about the way this car operates in top-of-the-line M440i xDrive trim. Albeit for a few different reasons, the same holds true for the 420d.

On the inside, the car is as classy, smart and pleasing to behold as its frontal styling isn’t. Getting the sculptural, lavish-looking fascia used not so long ago to drive up perceived quality levels in the 3 Series, the car mixes technological grandeur with sensory allure so much more effectively than the original 4 Series ever did. I’m still not sure BMW’s digital instruments are as easy to read as they ought to be, but it could be argued that the car’s excellent head-up display more than makes up for that. The driving position is low and snug, in a seat that supports longer-legged drivers brilliantly. The control ergonomics are utterly flawless.

In the back, adult passengers will find somewhat limited room, head room in particular being at a premium; but I suppose that’s why fully half of all last-gen Fours sold in the UK were four-door Gran Coupés (which offer slightly more second-row space). Needless to say, if you’re buying a two-door, you probably won’t make too much use of what’s back here in any case.

When you see BMW coupés of this size out in the wild, they tend to be driven one- or two-up. If my experience is any reliable guide, they’re also often driven daily, and quite routinely a pretty long way – with owners drawn to them for their enveloping habitability and the way they mix driver appeal with first-rate high-speed touring manners so well.

So could this be the first genuine 70-to-the-gallon, long-distance BMW coupé? Well, you’d have to drive it very sensibly; but 55mpg can be conjured without trying at all and an indicated 60 doesn’t take much effort.

BMW’s 48V hybrid set-up adds up to 11bhp and an undisclosed amount of electric-motor torque into the 420d’s crankshaft. The car’s homologated peak power and torque claims remain as they were in old 12V ‘micro-hybridised’ F32-generation 420d; but BMW claims the same 7.1sec 0-62mph sprint for the new version as it did for the old one – and the newbie’s quite a bit bigger and heavier. On-paper lab-certified fuel economy has improved, though, even if you compare this car’s more realistic WLTP combined test result with the old one’s NEDC equivalent – and that’s no mean achievement, considering the subjective gains to the car’s driving experience.

The 420d now has even better drivability, with a more authoritative and torquey sense of low-rev briskness and responsiveness about it than BMW’s already excellent four-cylinder diesels had previously. Much less part-throttle turbo lag is perceptible as you flex your right foot in a higher intermediate gear. The car accelerates notably more keenly and cleanly, and although it still runs out of puff a little once you’re stretched it beyond 3500rpm, it feels plenty fast enough to suit most tastes and purposes. Mechanical refinement is very good, and not just by diesel standards.

Without a doubt, then, this is a powertrain ready to devour long distance very easily indeed. And the chassis, too? Well, you wouldn’t call the 420d’s ride flawless, but it’d be more than good enough to cope very comfortably indeed with faster, smoother motorway surfaces, and it’s allied to handling dynamism that sets the car apart very clearly indeed.

This 4 Series is available in only M Sport or sportier-still M Performance trim in the UK and (unlike with the 3 Series) adaptive dampers can only be had in combination with runflat tyres. Our M Sport test car had standard 18in alloy wheels with conventional tyres and passive M Sport suspension.

It certainly felt a shade firmer-riding and busier in its close body control than an equivalent M Sport 3 Series although improvements to handling agility and lateral body control are harder to perceive. But that’s mainly, I suspect, because a 3 Series is such a fine-handling executive car in its own right; and the 4 Series is likewise. It’s balanced and engaging, with a carefully judged blend of directional stability, linearity of response, agility and cornering poise that’s unlikely to disappoint any interested driver. As with any typical modern BMW, the smoother the surface, and the quicker and better sighted the bend it’s running through, the more sweetly it seems to work. 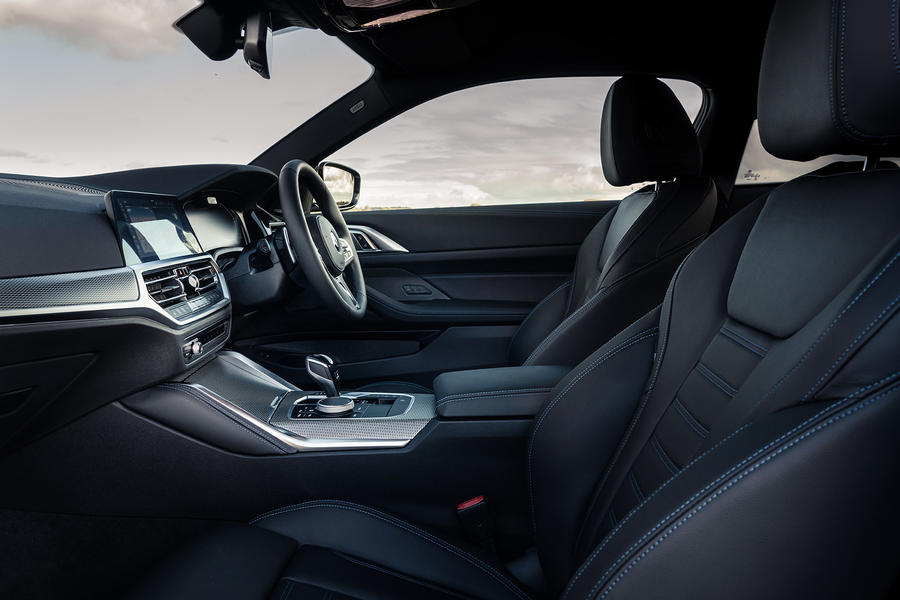 It’ll be interesting to discover whether adaptively damped cars on 19in rims and runflat tyres make the 4 Series deal better with UK B-roads than passively damped examples on smaller rims. I don’t imagine it’ll be the very smoothest of rides however you order it. Then again, if the grille hasn’t put you off, the ride certainly needn’t. This isn’t the sort of car that’ll spend very many miles on tortuous back roads after all, and the car's motorway comfort levels are pretty darned good.

The 420d is the sort of car that would cruise at high speed, at better than 50mpg, for hours on end. It would feel like your own magnificent, extra-exclusive bubble of technological power, effortless poise and laser-guided calm all along.

And so there is, in short, very little indeed wrong with what one of the most important versions of BMW’s brand-new coupé actually does out on the road – and on UK roads at that. The lingering question with which we finish is the same one we started with: could you imagine driving one? Right now, the easy answer may be ‘not on your nelly’ – but the thing about divisive design is, well, you get used to it.

For me, a certain amount of kerbside allure ought to be central to the appeal of a car like this. I doubt I’ll ever look at a G22-generation BMW 4 Series and just want one in the way I do a really nice E21, E30 or E46 3 Series two-door. Jokes aside, that does seem a significant failing and, apart from anything else, it’s also a great shame.

But I will undoubtedly soften over time to the way this car looks; for the record, you will, too. And getting to drive a 420d every day would, I highly suspect, make that process happen surprisingly quickly. 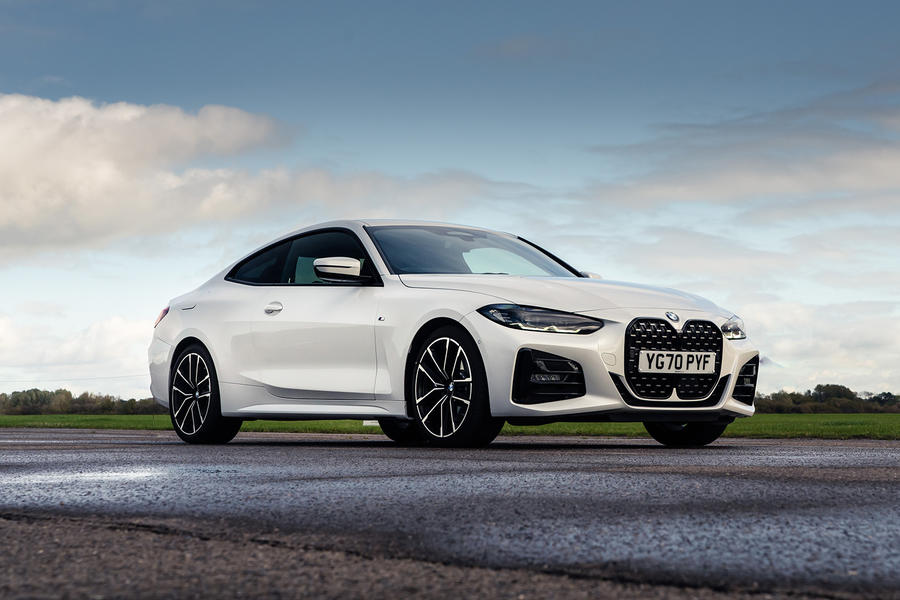 With one caveat.... the SE version of the new 4 without the machismo M Sport ancillary variations is a very integrated and appealing look to me.

I bought a new 320d Sport this year and while I'm delighted with the driving experience and interior the exterior design always looks slightly odd, both front and rear.I don't have that look over my shoulder after parking pleasure I've had from other cars I've owned. This new frontal design (again I stress in SE version) has an old school American muscle car influence that really appeals to me.  It also move away from the Russian doll approach even if modern BMW interiors are virtually indistibguishable from each other. If I had to have one or the other I would have this unique and distinctive look and settle for what is probably a very well designed interior anyway. I acknowledge that the SE version is not on sale in UK/Irl yet but I reckon it will be launched within a few months.

This car makes me want to buy

This car makes me want to buy an SUV. Ugly on the outside and another rubbish BMW interior. It lacks any appeal. Cars like this need to excite if they want a future.

Jaguar sell very few XEs yet it comes with 2 completely different front ends. BMW are just being stuborn not offering people a choice between this new design, or something more traditional.

As for the diesel version tested, i do wonder who will buy this now. It wont be company car drivers, who will want to pay less tax and something that comes with a plug, it wont be private buyers, unless they cover vast distances under the warranty, and dont care what its worth afterwards.