Vital statistics of Jaguar Land Rover’s all-new Defender family have been leaked online. The big news is that there will be three versions of the new Defender. The first two versions  - the 90 and 110 - will be launched for the 2020 model year.

What appears to be a series of screen slides, detailing the three-model Slovakian-built Defender family, the engine line-up as well as the trim and options have been covertly photographed and uploaded to Land Rover enthusiast forum Disco4.com. It’s not known where the leak took place, but it appears to be an internal JLR briefing. 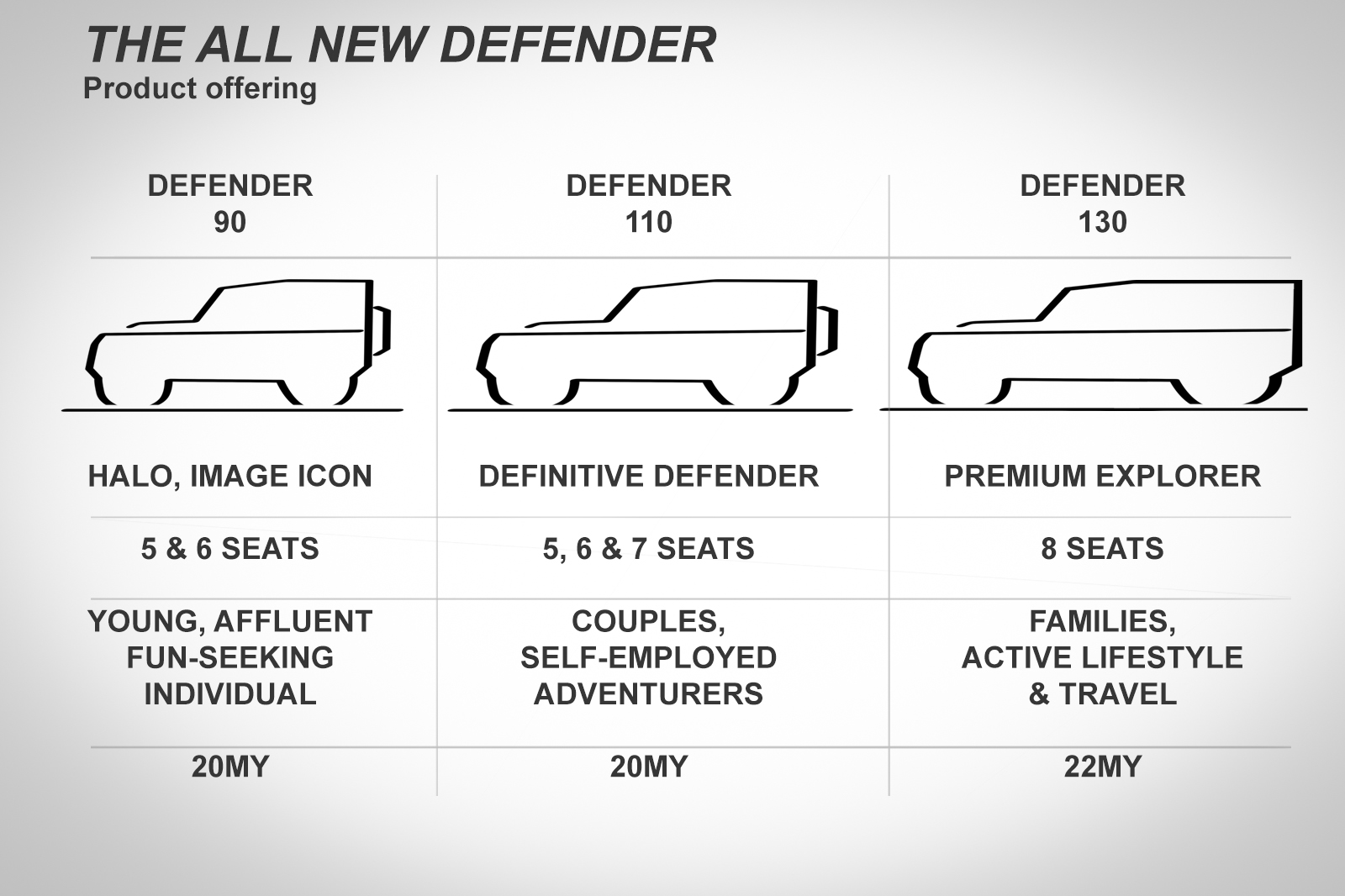 Like all future JLR models, the Defender family is based on the new aluminium MLB platform, which can be engineered as a conventional mild hybrid, a plug-in hybrid and a pure EV version.

There’s no detail as to whether all Defenders will be mild hybrids as standard and just one plug-in hybrid will be offered in 2020 and 2021.

The Defender 90 is described in the slides as the "halo image icon" of the Defender family and is aimed at "the young, affluent fun seekers". The shortest Defender will be available in five and six-seat options, which suggests that a three-abreast front seat is possible.

The 90 is also a surprisingly compact machine, measuring just 4.323m long. It is marginally the tallest of the three versions, at 1.927m. The wheelbase measures just 2.587m. All three Defenders are the same width at 1.999m, though there’s no detail on whether this is measured across the mirrors.

Perhaps the biggest surprise is the Defender 130, which is destined for launch in 2022 and so unlikely to be seen testing until the very end of 2019. 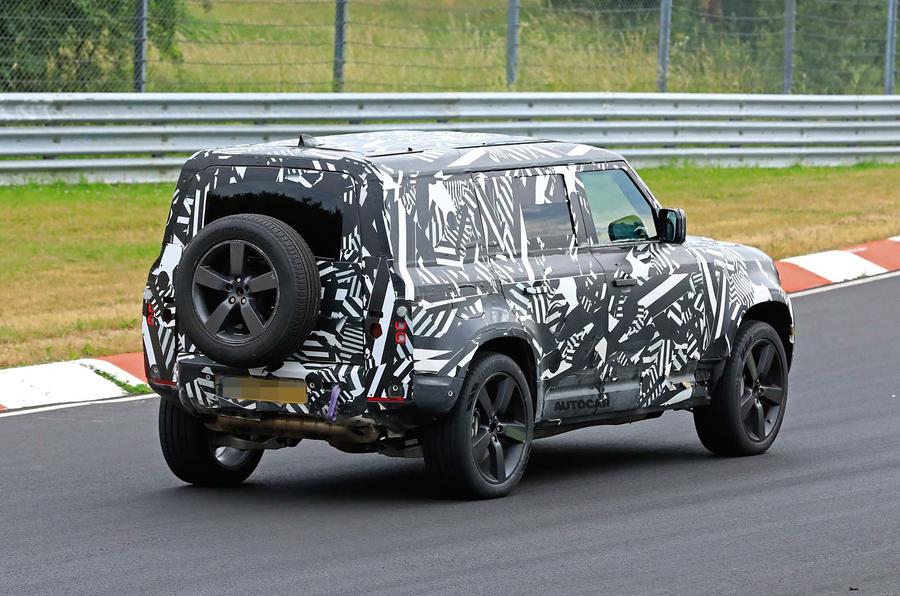 This is designated by JLR as a "Premium Explorer" for "families and active lifestyle and travel" and will come with eight seats. The 130 is a significant 5.1m long, although it has the same 3.022m wheelbase as the 110, suggesting a long rear overhang and substantial boot space.

Under the bonnet of the 90 and 110 models, there will be a choice of three petrol and three diesel engines in 2020 and 2021 and all Defenders will come as standard with an autobox and all-wheel drive.

Three petrol Defender engines - the P300, P400 and the P400e Plug-in Hybrid - will be on sale immediately. These are thought to all be straight-six units, and will be sold in the US, where many states adhere to the same strict ‘SULEV’ pollution regime as California. According to the leak, the plug-in P400 offers a torque boost from 400Nm to 645Nm and a 5.9sec 0-62mph time, Autocar understands.

There will be three base models in the Defender line-up, the first-year production X, Standard and, for 2021, the X-Dynamic. The high-end X will offer a fixed spec and "limited options" for 2021, before being offered with a wider spec.

The Defender Standard will be available with the full range of engine options from launch, aside from the D300 which arrives in 2021.

Customers will be able to select a further three specification levels: S, SE and HSE.

According to the leaked presentation slides, the Standard specification Defenders will get 18in wheels, LED headlamps, eight-way adjustable fabric front seats, a 140W audio system with six speakers, a 7in instrument cluster and a 10in touchscreen.

The launch ‘X’ model gets darkened 20in wheels and tail-lights, more highly-specced front seats and a "Co-Pilot" pack.

On top of this, JLR will offer four option packs (Capability, Interior Upgrade, Exterior and Convenience) as well as stand-alone options. Accessories - badged as Explorer, Adventure, Urban and Country - will also be offered by dealers. Clearly, JLR is looking to take advantage of the likely enthusiasm around the new Defender by trying to attract high-spending private buyers.

There’s no definitive news on pricing, though Autocar has heard from one source close to JLR that the ‘Standard’ spec Defender 90 with be priced from £40,000, suggesting the higher-spec versions will be distinctly premium-priced.

Some sources are also suggesting that the Defender will succeed with affluent families where the Discovery has failed to catch buyer’s imaginations.

The more authentic styling (inside and out), more advanced technology and new-generation platform could see Land Rover more convincingly challenging new-generation rivals such as the Volvo XC90 in this lucrative market. 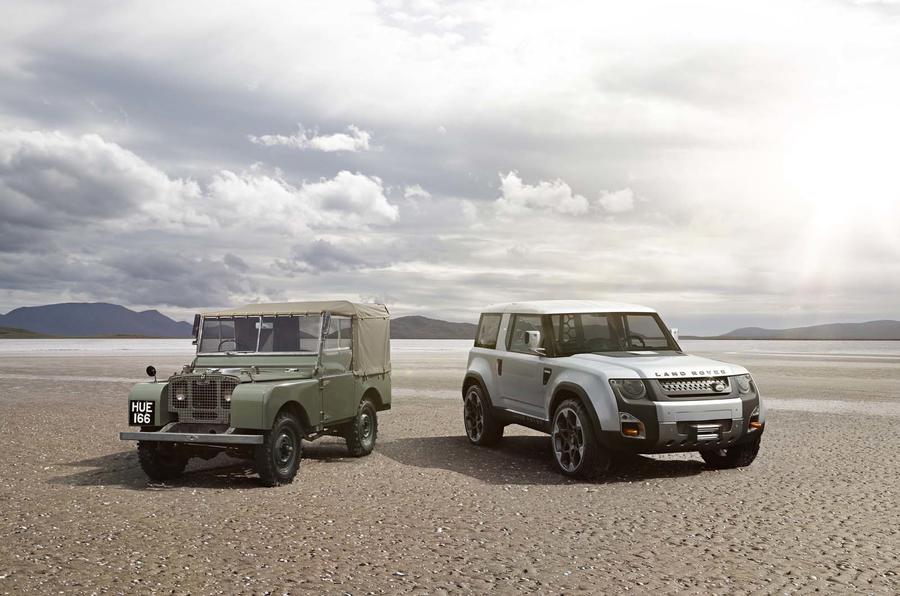 The distinctive post-modern exterior and interior - not a million miles away from the 2011 DC100 concept car - will also help the Defender distance itself from the lucrative Range Rover and Range Rover Sport models.

More like what the Disco was originally designed to be, and even then, more 'lifestyle'.  A pastiche, a toy ... how disappointingly predictable.  Gimme a Jimny, any day.

I agree. Simpler is better. This is too similar to the rest of the range, going upmarket when the Defender is supposed to be simple, rugged and effective.

I agree. Simpler is better. This is too similar to the rest of the range, going upmarket when the Defender is supposed to be simple, rugged and effective.

More like what the Disco was originally designed to be, and even then, more 'lifestyle'.  A pastiche, a toy ... how disappointingly predictable.  Gimme a Jimny, any day.

It does seem that way. This is essentially what the Disco was - a highly capable lifestyle off roader for affluent families - before LR turned it into a bloated Range Rover.

New Defender might be a good product, but JLR have just given their old market away.

Agree this is just another

Agree this is just another impractical clone 'euro box  lifestyle vehicle'. It could be a re-bodied Freelander 2 or a less practical Discovery 3/4 (minus the chassis). Land rover have lost the plot and there is a limited time period where  they can continue to use the brand equity of the old Defender.  There are still a few people out there that require a basic rugged highload capacity 4X4,  and it would have been great if Land Rover like other manufactures had presented the world with a usable chassied crew cab type vehicle that could be adapted for multiple uses other than just the school run or for adding a set of roof bars to get the outdoors look.

Just another foreign made SUV

Too expensive, too flash, too Slovakian-made, too Indian owned, too parts-bin and if it's anything like other LR products, too unreliable and too much depreciation. I've owned a Series 3, Disco 2 and still run the Defender I bought new almost a decade ago. These are utility vehicles, not the bloated status symbols aspirational muppets park on the drives of their little boxes. This new 'Defender' is either the former or the latter and it's the latter.

If its either the former or

If its either the former or the latter and its the latter. Its not either is it? Its just the latter!!

Too expensive, too flash, too Slovakian-made, too Indian owned, too parts-bin and if it's anything like other LR products, too unreliable and too much depreciation. I've owned a Series 3, Disco 2 and still run the Defender I bought new almost a decade ago. These are utility vehicles, not the bloated status symbols aspirational muppets park on the drives of their little boxes. This new 'Defender' is either the former or the latter and it's the latter.

Sorry i have heard a lot of rubbish in my time but yours takes the biscuit, Too Expensive, how do you know, they have not and never have mentioned price, Too flash, again how do you know YOU have not seen it, I have, its nothing like any of teh cars they currently make, so you are wrong again, Too Slovakian made, LOL, thats hilarious, racist and hilarious, other car brands make cars there and they are made to the highest standards as are the D5 models, Too unreliable, RUBBISH, too much depreciation, again, hilarious, no residuals have been issued by anyone, so again, you make wild inaccurate comments, Too Indian Owned, again racist and who cares, the Americans own ASDA, The Indians own 90% of the Tea market in the UK, Ford has always been American, as was Vauxhall from 1912 to 2017, now French, the Gemrnas own Rolls and Bentley and thats made little difference, and Mercedes owns a large chunk of Aston Martin along with investment companies from the UAE, so where a company is owned from is a total irrelevance.Parts bin, now that really funny, the entire exterior and interior of the car is bespoke to teh defender, the chassis and electrics are shared, like they are with every car brand on earth, your series three was a parts bin car, the Disco 2 was definately a HUGE parts bin car, so before you berate a car for utilising parts from another car, dont make yourself look stupid by then claiming to own cars that you consider to be superior, when clearly they are not.And to make wild and inacurate comments on something you have not seen, not seen run off road (I have at Eastnor) and on road, along with the interior, exterior and the rest of its capabilities, shows that you really have no idea, and are just bleating to try and make out that you know what you're on about, when you dont.

Too Expensive, how do you know, they have not and never have mentioned price, Too flash, again how do you know YOU have not seen it, I have, its nothing like any of teh cars they currently make, so you are wrong again,

Does it have an interior that you can hose down after a hard days graft, will there be versions available to the military that can be repaired in the field with minimal tools?

If not, its not a Defender..

Having seen the scoops of the interior, it appears far too up market to be a real defender, I am not doubting its capabilities, I am doubting its fitness to replace a basic, utilitarian farm/military vehicle, which effectively is what the defender was.  It might look like a modern interpretation of a Defender, it doesnt mean it is one.

Ranting is not opinion

A great deal has been leaked about the new Defender, on this site and elsewhere, indeed every aspect of the car is available for examination. I've taught Engineering Management and be assured it doesn't take an engineering or marketing genius to calculate the price bracket the car must fall into and its probable cost of ownership. The 'new' Discovery also made at the Slovakian plant has been a sales disaster, fact not opinion and unless the new Defender is unlike every other car designed and made by JLR, reliability will be awful.

If you want to be taken seriously then offer your own opinion and keep your purile attacks on others to your bedroom. And stop posting that picture, it betrays you as exactly the sort of aspirational (JLR's word, not mine) buyer JLR love, the sort that can't afford the car they drive.