BACK TO ALL NEWS
Currently reading: Inside the industry: Trouble ahead for the PSA-FCA merger?
UP NEXT
Mazda to launch own version of new Toyota Yaris by 2023

Inside the industry: Trouble ahead for the PSA-FCA merger?

Nobody expected the £40 billion FCA and PSA merger to be simple, but tensions are rising as the long engagement moves towards marriage in 2021, compounded inevitably by the pandemic, Italian government support to keep FCA afloat in recent months and the clashing-and-sometimes-competing interests of stakeholders.

Even before the madness of Covid-19, the proposed merger was the subject of deep scrutiny, spearheaded by concerns that the new entity would take too much of the market. Surprisingly, however, the European Union’s attention has now fallen not on the prospect of forging what would be the world’s fourth-largest car maker by volume, but on its potential grip on the commercial vehicle market.

Car-mad readers might raise an eyebrow at that, but FCA and PSA sold 775,000 trucks and vans between them last year, equating to a 34% stronghold on a market that’s increasingly competitive and, thanks to the gig economy and door-delivery boom, lucrative.

A few years ago, we heard that Ford of Europe’s only profitable vehicles were “SUVs and vans”. The dials have since moved, but there’s still a truth to that – so much so that a significant part of PSA’s turnaround in recent years was funded by commercial vehicles. Cutting off the arm that builds them to satisfy competition watchdogs is thus deeply unappealing.

Nor is it the end of it. The devil in the detail extends from PSA having to offload its stake in parts supplier Faurecia to FCA selling off its Comau robotics business – complexities to overcome still, yet those paled into insignificance by the threat of a voice piping up from the back of the room just as the nuptials are being agreed.

The metaphorical jilted lover comes in the form of FCA shareholders who are expecting a £5bn dividend once the merger is done. All fair enough, given the value exchange, but there are growing doubts as to how it will be paid – especially as the optics of making a few people very rich are spectacularly awkward when Italian taxpayers have just given £5.7bn to FCA as part of that government-approved bailout.

One way out is to offload assets to raise the funds, so that the company is seen to pay its way. Could it be that the mega-merger of the decade, conceived to give all parties strength in depth into the future, could instead lead to arguably the car industry’s two biggest underachievers, Alfa Romeo and Maserati, being sold off? And who’s to say that, if they find a benevolent owner and finally have their potential tapped, they won’t be the biggest winners of the merry-go-round anyway?

PSA brands are free to decide their own EV strategies 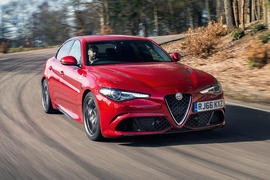 Imagine thinking selling of a car brand to afford a one time dividend payment is a good idea, jesus

I struggle to see why else

I have to laugh at some of the comments here

Really Mazda buying Alfa not a hope. Don't get me wrong Mazda are a great little company that make some really great looking cars. That there is the problem do. Mazda is no V.W or Toyota or Ford. Its a car company. Mazda also still have problems with there diesel engines that are badly designed and with rust protection on there cars. I think Honda or Toyota maybe even Ford should buy Alfa if it was for sale.

As for the comment on V.W or BMW making Alfa's or Maseraties more reliable lol.V.W and BMW have terrible reliability. Alfa are not bad reliability wise at the moment but been owned by either of them would surely change that not for the better but for the worse. They are built worse than they ever were and are now using sub standard materials. I seen there recently that the Bearings in the new Transporter and not lasting very long which is very bad for a commercial vehicle.