Three of Toyota's Le Mans sports cars, including the 2013 TS030 Hybrid, will compete on the hillclimb at the Goodwood Festival of Speed.

Toyota will be bringing its TS010 and GT-One Le Mans racers from the 1990s to run alongside its TS030 Hybrid racer from this year's event. Martin Brundle and Emmanuel Collard will join current Toyota Racing drivers Anthony Davidson and Alex Wurz to pilot the cars.

As well as the Le Mans racers Toyota will also be displaying its WRC cars, which will take on the Goodwood rally stage.

For potential customers Thursday's Moving Motor Show will offer a chance to see the FT86 Open concept, which remains a design study for the moment - as well as the GT86. The track-focused CS V3 GT86 will be present alongside the TRD Griffon project car, which gets its UK debut at the event and will also be going up the hill.

From Lexus, which is being represented at the festival for the first time, comes the UK launch of the new IS. The hybrid will also be taking to the Goodwood hillclimb, and will be stationed alongside the Lexus LFA.

For all the latest news from the Goodwood Festival of Speed, stay tuned to Autocar.co.uk 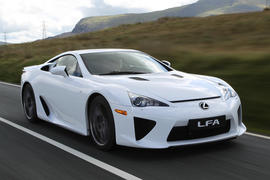